Reprinted with permission from the Cape May Star &Wave 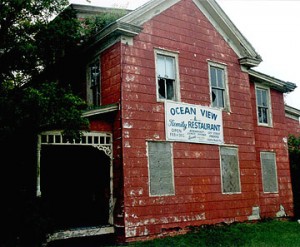 Wear and decay from years of neglect are as obvious on the outside as they are on the inside of the circa 1859 Sawyer homestead.

COLD SPRING — The old house is gone now. A victim of demolition.  For more than a decade, the former homestead sat sadly by the side of the road deteriorating, rotting — awaiting any hope of salvation. But decades of apathy wore away possibility the building could be saved.  And time took its toll — eventually it was too late. The decree was set.  So on July 10, 2000, in a matter of hours, more than a century of American history vanished. For good.  To some it didn’t matter — just an old house cluttering an otherwise valuable piece of land. That Civil War Colonel Henry Sawyer lived here during the last years of his life seemed just a dusty memory — like history itself — worn, dull, threadbare. And finished.

Others shook their heads and called it a shame. Such a sad state of affairs. So much history. Too much money.

There are a few, however, who never view the past as gone. To them history lives on. Vibrant. Unending. And sometimes even tactile.

Together last October at the old Sawyer house on Seashore Road, Donlin and Farace join forces for their own figurative day of reckoning.

Donlin comes as a Sawyer historian, a Sawyer impersonator, a Sawyer biographer — a Sawyer buff. Farace is here as a spiritualist, a medium, a clairvoyant. And, she says, one completely devoid of any historical Sawyer information.

Through the years rumors of sightings have persisted. Donlin knows a man claiming to have seen Sawyer himself 27 years ago standing at the top of the stair case. The man was 13 years old at the time, and never forgot the encounter. 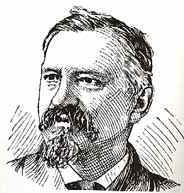 So Donlin is curious and expectant. He wants to meet Sawyer. But he is also skeptical. This is his first experience with a medium. How reliable are they? And do ghosts even exist?

The two, Donlin and Farace, meet in the driveway of the house. Also along are Leigh Ann Austin, the real estate agent listing the house, Bernie, a local business owner, and this reporter from the Cape May Star and Wave.

As Donlin arrives, Farace is already getting the feel of the place.

“There were stables over there,” she says, pointing towards the large weeded field behind the house.

“And I see outbuildings over there,” Farace continues pointing slightly to the right. “Servants, maybe?” she questions. “No,” she answers herself quickly. “The buildings are nicer than that. Not log cabins, but wooden buildings in nice shape.”

Donlin looks confused. “I don’t know about that,” he says. “That’s a new one to me. But it was a large plantation where they grew many crops. Nothing is documented about outbuildings, but I’m sure Sawyer had people living and working here. You may be right.”

Before entering the house Farace asks the group if any are frightened. She’s come with Holy water and a Bible, she explains, in the event anyone is scared or disagreeable souls are met.

As Farace enters the house she tells Donlin she’s looking for cold spots. And she immediately finds one.

“Right now I’m just getting the energy. But here,” she says, “does anyone see it? A little ectoplasm there in the corner? Like a little fog.”

Haas says he does. Donlin peeks around the corner and agrees. “I see something,” he says. “Not a figure, but a grayish spot. I see it.”

Farace emphatically urges the Star and Wave to take a picture.

“You might see it in the picture when it comes out,” she says excitedly.

The picture snapped, Farace exclaims, “Oh, you got her good! Oh my God. You should have seen what she was wearing.”

“It’s a young woman,” says Farace. “I’d have to say she’s about in her thirties.”

“Mary Emma was the colonel’s second wife,” concurs Donlin. “She would have been about thirty at the time of Sawyer’s death.”

Farace is looking for her Holy water. “I don’t want her to get frightened.”

Donlin says, “Yes, she was an extremely mild-mannered, retiring woman.”

“She says her name is Mary. Or Mar…” says Farace. “They come in at such a high level it’s hard to hear them. All I really got is the M.”

“She wants us to follow her,” says Farace. “She keeps telling me to go here. Go here. So what is here. What is down at this end?” 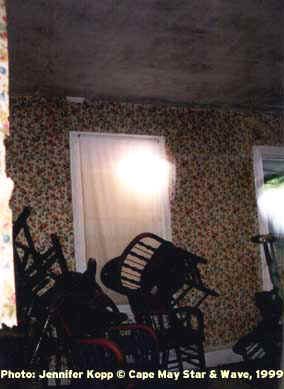 Two “ectoplasmic impressions” are left on the frame of film shot by Jennifer Kopp at the instant Gail Ferace exclaimed “You got her good! ” There was nothing in the room at the Henry Sawyer house to reflect the camera’s flash. The windows are boarded up leaving the room so dark the photographer shot the picture without looking through the lens. Ferace claims these images are the spirits of Henry Sawyer’s second wife Mary Emma and her son Henry Washington Sawyer, 2nd

“Well, her husband was buried from right here in this room. The funeral procession came from this room,” says Donlin.

Donlin is obviously shaken. During a telephone interview later in the week, he told the Star and Wave it was ‘highly doubtful’ Farace could have known that.

“This is very uncommon knowledge,” said Donlin. “Unless she searched through all the microfilms of the Ocean Wave or Star of the Cape newspapers, there’s really no way she could have known.”
“Mary” is now leading Farace upstairs. On the way up Farace says Mary is grieving.

“She had a child. Did one of these children pass away?” asks Farace.

Donlin says one of her sons passed away at the age of 28 during an influenza breakout in 1918.

“That grieved her quite a bit,” Donlin says. “He was her first born. Henry Washington Sawyer the second.”

“That’s what she’s telling me,” says Farace. “One of her children is still in spirit.”

“There are many, many spirits in here.”

The group settles in what was the front master bedroom.

Farace uses the English version of the name — more like Chahles.

Donlin doesn’t know. He’s looking for the colonel. “I don’t know Charles,” he says. “Maybe he was a subsequent owner.”

She again says, “There are many, many spirits in here. Unfortunately, Henry isn’t here.”

Donlin’s disappointment shows on his face.

“What happens when spirits have obligations or are disheartened they’re stuck here and there’s no way to get back,” Farace explained.

Suddenly, Farace says Sawyer has been reincarnated already. “He’s back here on Earth already. That’s why we’re not picking up his spirit,” she tells Donlin. “He had unfinished business and he popped right back in.”

“Maybe that’s what Chahles was trying to tell me, that he was Sawyer reincarnated. I don’t know,” says Farace.

“But he died in five minutes,” says Donlin. “He was an extremely doing, ambitious person. Maybe this incarnated business, coming back, he felt that because he died so suddenly of a heart attack, he had unfinished business.”

Farace agrees. That could be it.

“That’s it,” she says with certainty. “He did and this is his second reincarnation since.”

She and Donlin figure his reincarnated soul would be approximately 25 years old — by tell of the last ghostly Sawyer sighting 27 years ago.

“There’s someone here with you.”

Farace turns to Bernie who has been quietly observing the events. 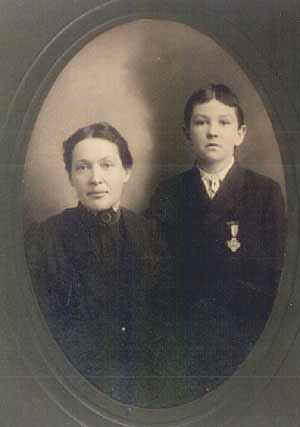 Bernie says both passed away some time ago.

“She says her name is Catherine,” Farace says. “Were either of them named Catherine?”

Bernie says no. Both were named Mary.

“She’s holding a toy fire truck,” Farace continues. “Did you have a toy truck like that?”

Bernie says he did. But don’t most young boys?

“She’s acting very motherly,” says Farace. “She’s a short little woman and she’s trying to tell you something by holding the truck.”

Upon further reflection, however, just hours later, Bernie remembers he had an aunt named Catherine. Or Katherine. He always called her Aunt Kate.

The toy fire truck remains a mystery. Farace says it could mean many things. Perhaps it was simply a memento of childhood days, simply a fond memory. But she also warns Bernie should check his smoke alarms. She advises Bernie to light a candle later that day in acknowledgment of the visit. He does.

Spirit(s) of the past help keep our history alive

The session ends. As the group leaves the old farmstead one thing is agreed. Despite its rather dilapidated appearance, effort should be made to preserve the property.

“Unfortunately, those looking at the property are more visually attracted to the mess and not the structure. I had a builder look at the farm and he felt it was in sound condition.”

Donlin sees the past much as he sees the present. “Human nature never changes,” he said. “Human struggles then are no different than those of today. The venues may have changed but the human fight for survival remains the same.”

Donlin says properties tell stories of people in another time, and show not only the differences in lifestyle but also the similarities.

“If we don’t have an understanding of the past, we no right to have expectations for the future,” he said. “Properties tell stories of people — human struggles that are no different than those of today. Family, income, patriotism , love, brotherhood. These haven’t changed a bit.”

The tour with Farace opened his eyes even wider.

“I went in as a skeptic. But now I’m not so sure,” said Donlin. “Mary’s correct age, the ‘resting’ room, the grieving of her son. All this was highly significant. Uncanny. Almost bone-chilling.”
Bernie said the encounter confirmed his conviction that there’s more to life than meets the eye.

Donlin agrees, there certainly may be more than meets that eye and aptly asks, “for what footprints does a man truly leave in the sands of time?”