If any one ever tells you that history doesn’t make a difference, tell them to come to Cape May. Yes, it would have been a seaside resort no matter what, given it’s proximity to the Atlantic Ocean, but who knew that a fire in 1878 would ensure National Historic Landmark status nearly 100 years later? And, who knew that the impact of that same fire that occurred on Nov. 9, 1878 leveling 39 acres of land right in the heart of the city could still be felt on a sunny Sunday afternoon in October, 2004? 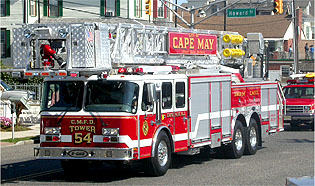 On October 10th the City of Cape May celebrated the acquisition of a new Tower Ladder truck affectionately called Tower 5154. The cost? $699,975. For a town with a year-round population of under 5,000 a 95-foot tower/ladder might seem excessive but for a town that has been plagued by as many devastating fires as Cape May it is more a case of “better safe than sorry.”

CapeMay.com spoke with firefighter and local columnist (and former mayor) Robert Elwell Sr. recently about the fires that changed this place we call Cape May.

Bob has stacks of pictures and newspaper clips that he has saved over the years. He uses much of the information to write his column “Glancing Back” which appears in the weekly Cape May Gazette newspaper. His list of the biggest and most significant fires in Cape May’s history begins with the Mt. Vernon Hotel.

At the time of its construction in 1853, the Mt. Vernon was considered the largest hotel in the world. With a dining room capacity of 3000 people, the Mt. Vernon made Cape May famous, according to an account by Elwell, “as a vacation spot before the Civil War.” It was located on Beach Avenue in South Cape May. South Cape May (chartered as a borough in 1894) had oceanfront lots that ran between 7th and 21st avenues connecting Cape May Point and Cape May. The ill-fated community washed out to sea after repeated storms and breathed its last gasp during a September hurricane of 1944.

The Mount Vernon breathed its last gasp during a September fire in 1855. The ocean frontage of the hotel ran 495 feet. It was four-stories high and ornately decorated with gingerbread at every level. Six people died in the fire – one of the two proprietors, Philip Cain, his two daughters, two sons and a housekeeper. 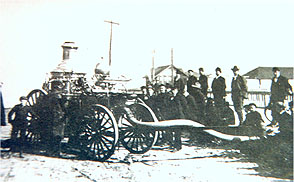 In 1850 the Kursaal, located behind the Mansion House, was annexed to the hotel as a dining room on the ground level with sleeping quarters on the upper floors. The Mansion House, the Kursaal and two other lodging houses burnt down in a matter of hours.

In his column, Elwell quotes one Philadelphia writer who makes the following observation even before the Mansion House fire: “I believe there is neither a fire engine, a hose, ladders, hooks or even fire buckets on the island, at least I never saw any one of these appliances when there. If one of the main houses should ignite, at least there ought to be prompt means to pull it down by means of large fire hooks, if nothing better could be done, so as to prevent the enlarging volume of flames from extending to the other great hotels by spark or heat.”

Ludlam’s son would later rename Mansion House to Ocean House which changed its location to Perry Street. It is in Ocean House where the Great Fire of 1878 began. In the category of there’s no such thing as a coincidence – It is Ludlam’s son who would be accused of starting that fire, although authorities failed to make their case in court and he was found not guilty on those charges.

The second biggest fire in Cape May’s history was the fire of 1869. It occurred on August 31 at 2:30 a.m. By noon, one fourth of the Cape Island’s business section (also, the oldest section in town) was destroyed. Fire broke out in a small store located on Washington Street between Ocean and Decatur streets. The fire destroyed everything from Washington Street to Beach Avenue and from Ocean Street to Jackson Street. Among the losses were The United States Hotel, the new Atlantic Hotel, the American Hotel, Hufnal’s Drug Store, Barrett’s Saloon, and all the commercial buildings on the east side of Jackson Street.

Elwell writes, “Built in 1851, The United States Hotel had been the scene of several suspicious fires dating back to 1862. City officials had offered a reward for the apprehension of the arsonists of these fires. However, none was ever arrested.”

The hotel was never rebuilt. The previous owner, Aaron Miller owned the hotel for one year and sold it one week before the fire to Charles Conway for $80,000. Hmmm.

Cape May’s fire equipment at the time consisted of one hand-drawn hook and ladder apparatus. And, as you can, tell, it proved to be woefully ineffective. Knowing this, the mayor telegraphed the Camden fire chief and asked for help. Help arrived by train by noon but everything was in ashes by that time.

A wind shift – the same kind that destroyed Columbia house in 1878 – help save the grand hotel this time.

Blame for the fire turned on Peter Paul Boynton who owned the oriental wares store where the fire started. He was brought before the mayor under suspicion of arson but was exonerated.

At last, city officials came to the recognition that the buildings were made of wood, and would be rebuilt with wood so maybe they should invest in a little fire fighting equipment. A second hand fire engine was bought from the Philadelphia Fire Department for $3,200. The Cape May Fire Association was formed – Dr. James Mecray was president and John W. Lyett served as secretary.

None of these measures were enough, however, to save the town from the devastating fire of 1878 in which several cottages and large hotels were destroyed.

Elwell cites a couple of reasons why the city again fell prey to arson. “The fire department up till that time was loosely organized,” he said in a recent interview, and he thinks the volunteer firemen truly thought “it’ll never burn down. The Cape May firefighters back then were mostly from rural parts of the town and had never really been exposed to” a large city approach to fighting fires. More importantly, said Elwell, “the city had no infrastructure.” 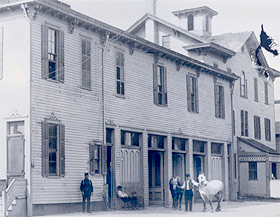 An overview of Cape May’s fire department written 20 years ago by Elwell’s aunt and Cape May’s librarian at the time Emma G. Elwell show that the very same Mansion House owner – Mr. Ludlam moved in 1867 that the city purchase “10 of the Portable, Self-acting Fire Engines.” The motion did not pass. Nor did a similar motion to purchase three Patent Fire Extinguishers. That motion was defeated in June of 1869. The Washington Street fire erupted that August.

City officials finally saw the necessity to provide the community with a full-time fire department after the Great Fire of 1878 and Cape May became the first town in the county to have a paid fire department. The fire fighters were volunteers who were on call 24 hours a day but the horses, used to pull the fire wagons, needed constant care 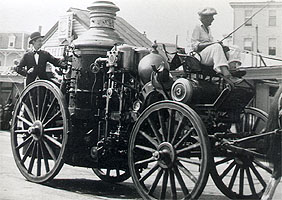 and tending. That necessitated hiring full-time chauffeurs who stayed at the fire house. The chauffeurs had one duty – to drive and care for the team of horses. Fifty men were hired to train, exercise and groom the team. Chauffeurs were still retained when the horses were replaced with motorized vehicles in the 1920s and it wasn’t until the 1970s that Cape May and surrounding areas hired full-time, paid fire fighters who did more than just drive.

Because the Great Fire destroyed so many large buildings, many of the houses and hotels still standing today were built in 1879 after that fire. They, therefore, share the same Victorian architecture which helped give Cape May its National Historic Landmark status in 1976. 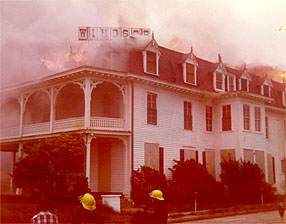 Despite attempts to keep the fire department up to snuff and keep the city safe from another fire that would destroy our Victorian town, Cape May has still had its share of modern fires, the most memorable being the destruction of the Windsor Hotel built, ironically, in 1879 after The Great Fire. Elwell notes in his column that destruction of the Windsor Hotel was “noteworthy because it was the worst fires in Cape May in the 21st century.” 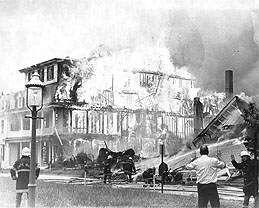 The original owner, Thomas Whitney, called it The Windsor after England’s Windsor Castle. The Duchess of Windsor, Wallis Simpson, spent the winter of 1917-1918 in the hotel. At her side was her first husband, Lt. Earl Spencer Jr.

The hotel was purchased by fundamentalist minister Rev. Carl McIntire in the 1950s. 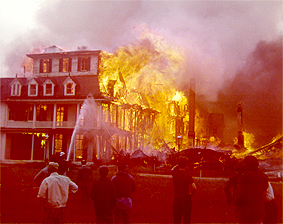 In 1973 the city ordered the hotel closed for fire code violations and because it “posed a threat to public safety.”

On May 18, 1979 at 10:02 a.m. the Windsor fire was reported by Donald Pocher who lived behind the Windsor on South Lafayette.

Elwell, who attended the fire, said the 100-year-old building “went up like matchsticks.”

Arson was suspected but never proved. 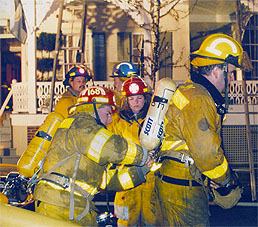 There have been other fires, most recently in 2001 when the historic Devonshire on South Lafayette burnt to the ground in minutes. It has since been replaced by a modern condominium version, that has the same original name. So, you can see the significance a small town like Cape May places on Tower ’54. The new truck’s “coming out party’ included a parade up Beach Avenue with fire engines from all the surrounding communities adding to the fanfare. The parade ended at the fire house at the corner of Franklin and Washington avenues. To celebrate, there were speeches, the Coast Guard band, bagpipers and plenty of food. 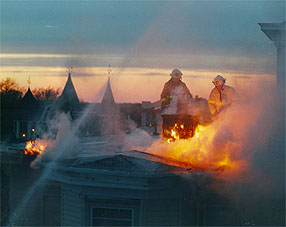 Bob Elwell was there and so was his son, Rob who is the fourth generation firefighter in the Elwell family.

History makes a difference to the people who live in Cape May and the Cape May Fire Department is dedicated to making that difference count.

Our special thanks to Bob Elwell for sharing his pictures with us for this article.