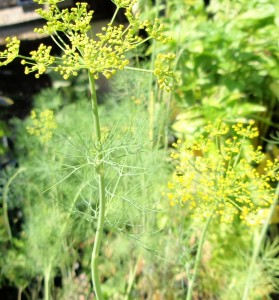 I have fond childhood memories of walking through dill up to my chin in my Polish grandmother’s (Babci’s) garden. Of course I was quite small then, but the wonderful warm, cozy aroma of dill takes me back many, many years to the crocks of pickles she made. My own dill never quite meets my expectations, except when it reseeds and comes up in early spring. The strong, tall stalks go for the sky. The dancing heads of gold look like a scene of umbrellas from singing in the rain.

The smell of dill pickles is reminiscent of many things and more recently it calls to mind our three summer visits to Poland. Many there often call July the season of Ogorki (dill pickle). Dill is lush in gardens and especially in all the wonderful open markets! Crocks of pickles stuffed with dill and Ogorki (pickling cukes) fill the air with a never to be forgotten aroma. 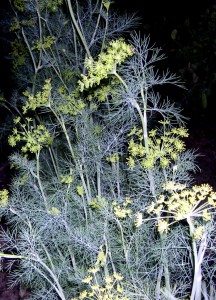 Dill is a medium-sized annual herb, with ferny foliage and umbrella like yellow flowers that produce oval seeds. It grows best when given a rich soil and adequate water, and it is also is happiest when nights are a bit on the cool side.

Dill is best grown from seeds. These can be planted from early spring to fall, about every 3 weeks. This successive planting is most successful for such a short-lived annual. It will reseed successfully also if allowed to do so. Moral to the story, you need to plant dill several times, once or twice in fall and then in late winter, as well as in spring and throughout the summer. Have a dill patch and as it begins to reseed, you will not have to plant it. It is best to plant your dill seeds right in the garden where you want them to grow. Dill likes to be planted in cool weather, but I plant it about every two weeks from now until fall. In mild winter areas that don’t experience a hard frost, you can plant dill in late fall. Cover the seeds lightly, keep moist and allow a week or two for them to germinate. I usually plant my last dill in early to mid fall and it goes well into winter. Planting them close together helps keep them from blowing over. When growing it in containers, use a deep pot to accommodate the long taproot, and remember that the plant can grow three feet tall. Plants grown in containers may require staking.

Dill is not an herb that remains tasty when dry. I buy fresh at the store in the winter. When you grow a lot of it, you might stuff a jar with fresh dill and cover it with vinegar. This can be used with sour cream over cucumbers in winter. However, the seeds can be dried for up to six months if they are stored properly in a cool, dark place. Once seed heads begin to form allow them to develop and dry completely, then cut them. You’ll be able to remove the seeds easily with your fingers or use the heads whole in pickles. 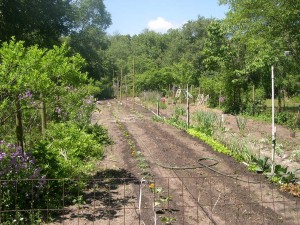 Old timers brew a stomach-soothing tea with two teaspoons of mashed dill seeds per cup of boiling water. Steep this for ten minutes and drink it for stomach and digestive problems. Much the same as fennel, it is said to help with colic or gas in babies if they are given small amounts of the weak tea.

Freshly cut, chopped leaves enhance the flavor of dips, herb butter, soups, fish dishes, and salads. Try fresh chopped dill, parsley and chives with lots of butter over boiled potatoes. Use seed heads in pickling and try grinding the seeds to use as a salt substitute. Both the flowering heads and seeds are used in flavored vinegars and oils. Fresh dill should always be stored in the refrigerator either wrapped in a damp paper towel or with its stems placed in a container of water. Since it is very fragile, even if stored properly, dill will only keep fresh for a couple of days. 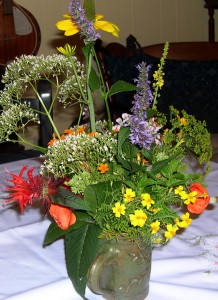 Dill is native to Eastern Europe, Scandinavia and the Mediterranean region. It has been used for its culinary and medicinal properties for centuries. Dill was mentioned both in the Bible and ancient Egyptian writings and was popular in the earliest Greek and Roman cultures, where it was considered a sign of wealth and was revered for its many healing properties. Dill was used by Hippocrates, the father of medicine, in a recipe for cleaning the mouth. Ancient soldiers would apply burnt dill seeds to their wounds to promote healing. Dill’s name comes from the Old Norse word “dilla” which means “to lull.” This name reflects dill’s traditional uses as both a carminative stomach soother and an insomnia reliever.

We love fresh dill with cucumbers, beets, potatoes and fish. We cut it fresh from the garden during the growing season. I find that cutting it often keeps my dill from going to seed. I try to cut often until I need the seed heads for pickles.

Note that compost in the soil is very beneficial when growing dill. Also, be sure to plant plenty of seeds, as the caterpillar of the swallowtail butterfly likes the pungent foliage as well. The international herb association has picked dill as the 2010 Herb of the Year. 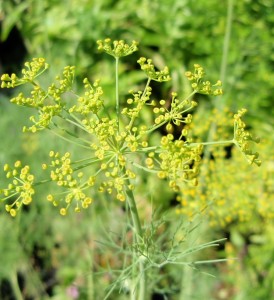 Scrub potatoes. Remove any blemishes and dice into bite-size pieces and boil until tender. Drain and toss with remaining ingredients while potatoes are still warm. You may make Cole Slaw by replacing potatoes with cabbage.

Note:  If you prefer peeled potatoes you may use any potatoes and if you like cook whole and scrape skins off . 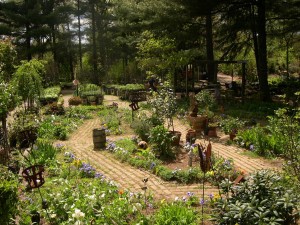 There are probably as many recipes for dill pickles as there are Polish housewives. I don’t remember my Babci using any vinegar in her brine, just water and salt, but today most recipes have at least one cup of vinegar to every 10 of water. I have been told that this is to compensate for the lack of acid in the city or softened water.

In looking over many recipes in Polish books, I notice that they are all different. Some use vinegar, some don’t. Some add onions, others horseradish, or red pepper, or even alum. Some add a peach pit or grape leaf. I have tried all of these things. I just like lots of dill and garlic. Be sure to test at 4 days and refrigerate if ready, The more dill the better!