A crime has been perpetuated against the taste buds of the American populous. The villains here form an Axis of Culinary evil. The perpetrators are a clown, a king, and a colonel. Fast food has taken away our desire to cook and our ability to distinguish good food from mediocre food. Proof was established when Zagat’s named KFC as America’s best fried chicken. Have our standards of taste fallen that far? It is time to dust off our skillets put down the McNuggets and get back to the kitchen.

Fried chicken is the penultimate in American comfort food and simple to make. Fried chicken assumes many varied forms from region to region, none of which require a faux military title. Fried chicken was cooked in various forms around the globe long before the South claimed it as its own. Fried chicken was popular amongst the Scottish clans of the Highlands. The English preferred the blander boiled chicken. Spiced foods and deep frying was prevalent in the cuisines of Africa. These two cultures and cooking styles converged on the plantations of the Antebellum south. Spices were generally shunned in Scotland whereas Africa was at the crossroads of the spice trade. This blending of cultures and cuisines makes fried chicken one of America’s first fusion foods.

Fried Chicken is one of those dishes that people have very defined ideas about regarding the right and wrong way to prepare. It is generally agreed that you start with a chicken. After that, the discrepancies begin. Since this is my column, I will enlighten you with what I consider proper fried chicken technique.

Use the comment section at the end of the column [Editor’s note: We no longer have one] to submit your rebuttal. This is a friendly discussion, so please no fowl language.

Start with a broiler chicken and cut it into eight pieces. Soak in buttermilk, seasoned with black pepper, dry mustard and hot sauce. Soak at least 24 hours. The acids in buttermilk help breakdown the muscle tissue, yielding a tenderer product. Osmosis also occurs when the soaking liquid is absorbed into the chicken, enhancing the flavor profile. After the chicken has soaked, drain lightly, but do not pat dry.

For the breading, I like heavily seasoned flour. Paprika, granulated garlic, onion powder, thyme and black pepper all add some zing to the chicken. Without much effort, you can easily exceed eleven herbs and spices and create a flavor that outranks the colonel.

I lightly salt the flour. If you are frying a lot of chicken, salt breaks down the oil. Also, fried chicken takes about 20 minutes to cook, just long enough for the salt to dry out the bird. Salting the chicken after it is fried prevents this and rounds out the flavors of the layers of seasoning. The best method of cooking is pan frying rather than deep fat frying. Heat a cast iron skillet over medium heat and fill 1/3 full with peanut oil. Flour chicken, by placing seasoned flour in a paper bag, add chicken, fold shut and shake vigorously. Place chicken in skillet. Fry about 10 minutes. Turn. Fry 10 more minutes.

Side dishes for fried chicken come in as many permutations as the chicken itself. For me, no fried chicken meal is complete without biscuits. Southern-style biscuits are simple to make. The type of flour used is critical. A blend of bread and cake flour will deliver a fluffy biscuit that doesn’t crumble too easily. Under mixing the dough creates what is referred to as a “shaggy mass” this will help avoid RBS, rubber biscuit syndrome. When cutting the dough, it is essential to bring the dough cutter straight up and down and avoid twisting. This will allow the biscuit to rise evenly and achieve maximum fluffiness.

Cheesy grits and collard greens also make good accompaniments. The great thing about grits, biscuits, collard greens and fried chicken is that cooking them is intensely personal. They lend themselves to individual interpretations. It is not important whether you soak the chicken in milk or buttermilk or how you season. What is important is that you put down the bucket and cook for yourself and your family. Food prepared by your own hands always tastes better. Until next month, Bon Appétit. 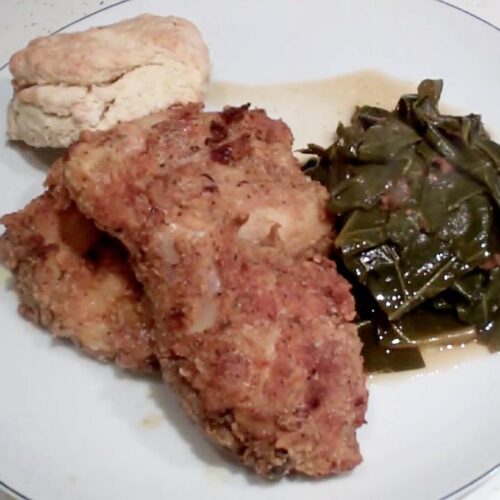 This recipe has two videos. Learn how to fry the chicken at https://youtu.be/gLZR_Kpoozw 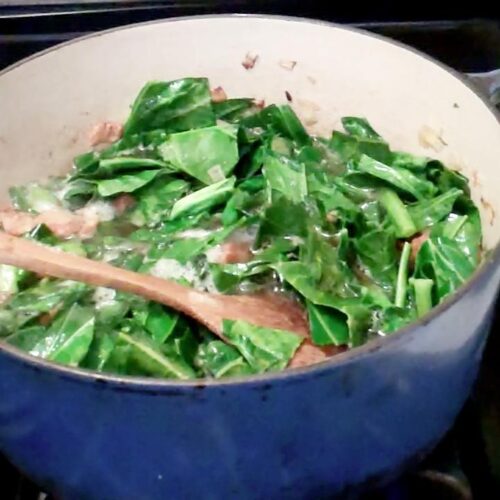 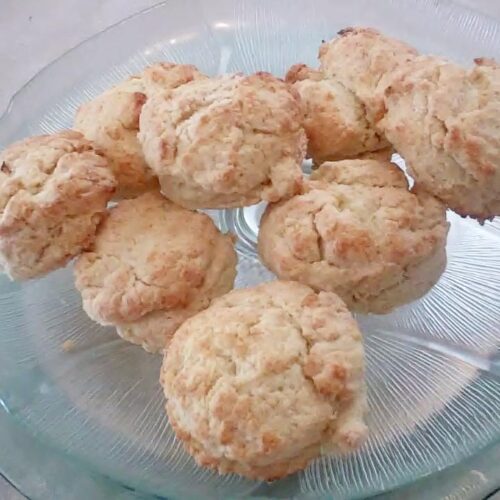