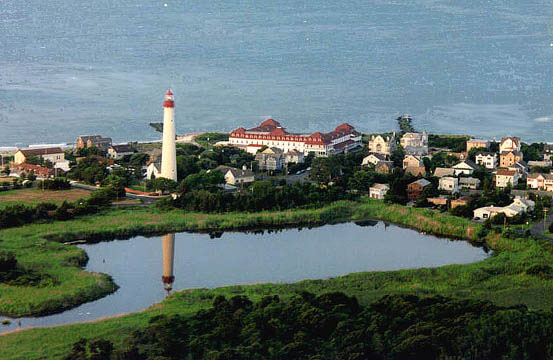 This could be the literal high point of your visit to Cape May. A bit off to the west, in the contentedly quiet town of Cape May Point, a sentinel stands, one of those poetic symbols of hope, perched on the edge of the land, shining. 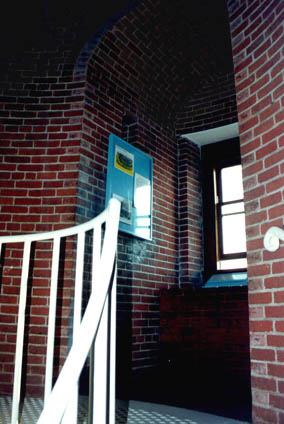 The lighthouse's gently curving bricks, a tapered tower with double walls to include vented space between them, tells 21st Century man that the engineers and craftsmen of pre-Civil War America knew a great deal about building.

The light at the top of the Cape May Lighthouse, once fueled by whale oil and now by electrical current, doesn’t need to do exactly the same job it once did when ships relied solely on its brilliance to bring them home. Technology has surfaced to streamline the paths of approaching ships. But this light, still flashing in 15-second intervals every night beginning at dusk, holds a place in the history of Cape May that will not fade.

You can spot the lighthouse before you arrive, even before you turn off Sunset Boulevard and into Cape May Point. The slim, tapered tower, an engineering achievement that involved using bricks that are actually curved, stands 157 feet and 6 inches tall, surrounded by Cape May Point State Park. The tower is actually double-walled, with an outer, tapered wall that is thicker at the bottom, and an inner, cylindrical one that supports the staircase. These walls were designed to survive winds several times greater than hurricane force.

Inside, a 199-step, cast-iron spiral staircase rises to the top, where an observation tower offers a panoramic view of the surrounding area— land and sea. Light and sound travel freely inside, thanks to the open ironwork pattern of the staircase. Yet somehow, you can see the space below much better than the space above. And, if you are queasy at all at the thought of climbing more than 100 feet into the air, you might want to heed the smart advice of a parent I overhead talking to a small child:

The spiral staircase appears more narrow than it proves to be on the gradual climb up. But watch out for visitors coming down, sharing the same space.

The climb up is really not so exhausting (although a sign posted on the lower level entrance warns against some conditions that make it unwise: do not, for example, climb while intoxicated or if you really do have a fear of heights); and the ascent is paved with five arched, windowed alcoves, nice stopping places that are decorated with historic photos and text describing the building’s past.

The amazing staircase, whose tapered steps join in the center to form a vertebral column, takes you right up to the observation tower where, on a clear day, you can see for more than 20 miles in every direction. At the top, an aerobeam light has replaced the Fresnel lens that used to be housed in the lantern. And today’s lighthouse keepers (there’s a whole staff of them) don’t have to do chores like trimming the wick, maintaining the oil level, and keeping vigil to make sure the light doesn’t go out. And while that light is not as critical to the survival of passing sailors as it once was, it’s still a welcome sight.

At the top, the visitor tilts a bit to go through the doorway and is faced with an unusual sign that commands: "NO SHOUTING"

Fishermen, says lighthouse manager Rich Chiemingo, still rely on it. “It’s not as necessary as it was at one time,” he admits. “But they still look for it.”

Chiemingo sees the landmark as a thing of unintentional beauty. “It really wasn’t built to be pretty,” he says. “It was built functionally. It turned out pretty.” The idea for the design, he says, came from a French physicist. “They had to have a strong tower that was fairly light. Hollow was the answer.

“It’s such a beautiful thing in all aspects,” he says. “…the shape, the dimensions.”

The first known lighthouse built near this spot was completed in 1823, although accounts that predate that suggest it might not have been the first. When that structure succumbed to beach erosion, it was replaced by another, poorly constructed tower in 1847, which fell into disrepair. The present lighthouse was completed in 1859– its first-order Fresnel lens first lit on Halloween night that year. (That lens can now be found at the Cape May County Museum.)

Today, the U.S. Coast Guard maintains the lighthouse; and Mid-Atlantic Center for the Arts (MAC), which leases it from the state, has been restoring and operating it as a historic site since 1986.

One of several drawings found at landings in the lighthouse, this one shows the spiral stairs from the base to the lantern.

The lighthouse is open to the public daily, through early January (closed Thanksgiving and Christmas). Hours vary. Admission is $4 for adults, $1 for children ages 3-12. MAC sponsors guided, themed tours: “Stairway to the Stars,” ($12 per person) is a nighttime visit that begins with a trolley ride from Cape May (offered through October 16) and “The Keepers on Duty” (normal charge), a living history experience complete with costumed actors (through November 14). For more information about the lighthouse and an exact schedule of tours, call 884-5404 or 884-8656. For historic background, consult John Bailey’s book “Sentinel of the Jersey Cape,” available in the lighthouse gift shop. 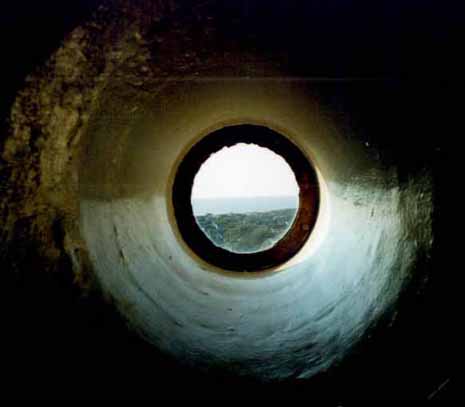 One of several portholes near the top of the tower that look out over Cape May Point, Lake Lily and the beaches.

Views from the Lighthouse