Skip to Main Content
Cape May is practicing social distancing in response to the threat of COVID-19. City beaches and the promenade are closed. See what businesses have takeout and online shopping

Cape May is an island, accessible by one of two main bridges that cross the canal waterway linking the Delaware Bay with the Atlantic Ocean. Most people drive to Cape May, though other transportation methods are available.

Driving to Cape May

Most people drive to Cape May. If you don't mind a few hours in the car, this is the easiest way to reach us. We're located at the southern end of the Garden State Parkway.

Total driving time: 1.5 to 2 hours, depending on traffic

If you are traveling from Philadelphia, take either the Walt Whitman or the Ben Franklin Bridge to I-676 S. Follow the signs to RT-42 S and Atlantic City Expressway. Once on the Expressway, get off at Exit 7S to the Garden State Parkway. Follow the parkway until it ends and you're in Cape May!

Total driving time: 3.5 to 4 hours, depending on traffic

If you are coming from New York, there are three ways to get to Cape May. Holland Tunnel, Lincoln Tunnel or George Washington Bridge. Once you've made it through or over one of the aforementioned,  follow the signs to the New Jersey Turnpike South. From the Turnpike, get off at exit 11 and continue to the Garden State Parkway heading south. Follow the Parkway until it ends.

Total driving time: 3 hours from Baltimore, depending on traffic

If you are coming from Baltimore & southern locations, you may want to consider the Cape May-Lewes Ferry (see below). Otherwise, take 95 North and cross the Delaware Memorial Bridge. Take the bridge to Route 40 East. Follow Route 40 to Route 55 South. Take Route 55 to its end, which is at Route 47 South. Continue along Route 47 South toward the Garden State Parkway. Take the southbound GSP (there is a toll) until its end.

Where can I park in Cape May?

Learn more about Parking and Getting Around.

If traffic is backed up across the main bridge, try the alternative. The West Cape May bridge leads into (what else!) West Cape May. This bridge is most commonly used when coming into town by way of the Cape May-Lewes Ferry. But to get to the bridge from the end of the Garden State Parkway, go North on Route 109 (a right turn). Follow 109 (or the signs to the ferry) around a jug handle. At the first light (Route 626 - Seashore Road) turn left and drive straight across the canal into West Cape May. This road becomes "Broadway" and terminates at the Atlantic Ocean in Cape May City.

Flying into Cape May

For most travelers, the closest major airport is the Philadelphia International Airport. It is an easy drive from Philadelphia to Cape May which takes just under two hours. From there, please follow the driving directions below.

Rental cars, taxis, and shuttles run out of Atlantic City. If you need an alternate form of transportation into Cape May, you can take a taxi or a shuttle to the NJ Transit Bus Station in Atlantic City. Buses run from this station directly into Cape May. Visit NJTransit.com for more information.

Time from Cape May airport: 10 minutes by car

Time from Ferry Terminal to Cape May: 10 minutes by car

The Cape May-Lewes Ferry is a great option for drivers coming from the South. The ferry will take you from Lewes, Delaware (17 miles or so) over the Delaware Bay to North Cape May. From North Cape May, you are only a 5 minute drive into Cape May. The ferry crossing takes approximately 80 minutes to cross the Delaware Bay. This is another great option for foot passengers or day trippers who want to leave their car behind. There are shuttles on the Cape May side of the ferry terminal to take you into Cape May.

If you take the ferry across to Lewes, Delaware and points south, allow yourself 20 minutes to get to the ferry dock from the center of Cape May. You need to cross a bridge and traffic can build up easily.

Is there a bus that runs directly into Cape May? Yes. NJ Transit buses run from Philadelphia, New York and from many locations in New Jersey to Cape May via Atlantic City.

On the NJ Transit site, select "Cape May Bus Terminal" as your destination. We are on the 552 Atlantic City - Cape May bus route. This drops you off right by the Welcome Center, in the heart of town, in walking distance to many B&Bs, restaurants, and shopping.

In some cases, such as coming from New York City, you will need to use a combination of public transportation, including subway trains. The NJ Transit website will help you create a full itinterary or you can call their customer service line at 1-973-275-5555 for assistance with schedules and fares. 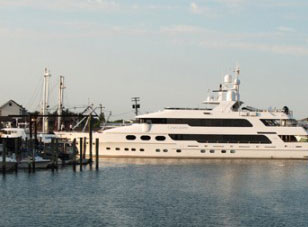 Cape May is a popular vacation spot for boaters, and numerous marinas here make your visit enjoyable whether you're just passing through or planning an extended visit. Our full-service marinas that provide first class service, offer transient dockage for the visiting boater, and are a short cab or bike ride to downtown Cape May.

The Cape May Inlet Sea Buoy leads to the entrance of Cape May Inlet and is home to a large commercial fishing fleet. The inlet is wide and deep with long jetties on each side allowing these commercial vessels and pleasure craft to pass side by side safely. Cape May is home to the United States Coast Guard Training Center. Once inside the harbor, there's a no-wake zone that is strictly enforced.