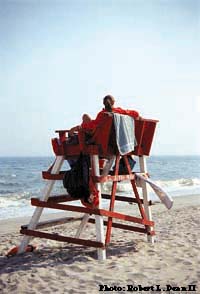 Cape May is a town that is proud of its rich heritage. An often ignored but vital part of that heritage belongs to the Cape May Beach Patrol.

In 1865,as the Civil War was ending, there was a feeling of prosperity in the land. For the first time, thanks to the railroad’s arrival at the Jersey Shore, large numbers of folks from the big cities of Philadelphia, New York, Baltimore and Washington began arriving in Cape May.

They came to stay in the new hotels, sample the cool summer breezes and wade in the surf – much the same as we do today. In those day’s most people didn’t swim; they “bathed” in cumbersome, heavy, waterlogged attire. Getting caught in a heavy surf or a riptide could have disastrous results! The hotel owners realized that this was not a big plus for the tourist trade and decided to hire men to help bathers who might get in trouble. The idea was good one and in the early 1900’s the City of Cape May hired a paid force of professionals to patrol the ever more popular beaches. Thus the Cape May Beach Patrol was born. 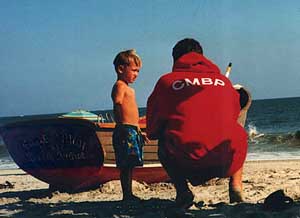 Changing of the Guard

More than just swimwear has changed during the last century. We no longer “bathe” in the surf. Our time in the ocean is extensive We swim, surf, ride waves with and without boogie boards and just enjoy the sparkling sea. As a result, the vigilance of the Cape May Beach Patrol has become even more important.

Today’s Beach Patrol in Cape May is responsible for protecting 2.2 miles of beachfront. The patrol’s members are posted at 21 lifeguard stands from 10AM to 5:30 PM, 7 days a week.

Their duties also include patrolling the surf in a Mercury Jet Boat and a Wave Runner. Two 4wd vehicles were recently added to assist in their beach protection mission. And there’s another change from the Beach Patrol’s origins: These days when you pass a lifeguard stand on the beach and look up there’s a good likelihood you may see a woman guarding the beach (see below.). The CMBP has eight women among its ranks, including several long-time veterans. The Beach Patrol admission requirements are rigorous. Perhaps that is why Cape May’s is one of the only nationally certified beach patrols on the whole South Jersey shore.

Off-season the members of the CMBP are students, teachers, college professors and registered nurses, even a few lawyers and doctors. During the summer they all have one thing in common – making the beaches of Cape May as safe as humanly possible. The fact is that no one has drowned in Cape May at a guarded beach while lifeguards were on duty throughout the long history of the Cape May Beach Patrol. That’s truly an outstanding achievement that CMBP members, past and present, reflect on with great pride. 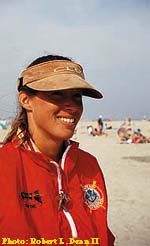 When Patrice came to the beach about nine years ago she was a real novelty. For the first time it was the boys ( big and little) who hung around the lifeguard stand. Fascinated 10 year old kids followed Patrice into the water as if she were the Pied Piper.

She never lost her patience with all of this attention. When asked why she became a lifeguard – and why she continues her watch year after year – she’ll tell you she initially tried out for the force as a college student who loved to swim and who loved the shore – Cape May in particular. Now she’s a college graduate with a Master’s Degree, and she coaches college swimming in the off-season. Her husband is a lieutenant of the Cape May Beach Patrol.

She says she still loves the beach, loves to swim and compete with other guards each year from the various resorts. She always enjoys returning in June to Philadelphia Beach (her post) where she can renew old acquaintances with all of those families “down below” the stand.

And they look forward to seeing her too. Those ten-year-old boys are all 19-year old men now, who probably see girls differently as a result of having Patrice in the stand, guarding them. 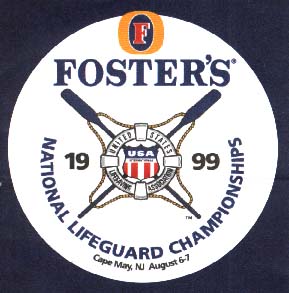 You can see Cape May’s Beach Patrol compete with lifeguards from as far away as Australia during the 1999 National Lifeguard Championships. This year they are hosted in Cape May from the August 5th  through the 7th. Lifeguards will be competing in surf swim heats, surfboard rescue racing, team relays ironman- ironwoman competitions and more. No matter who wins, the sure bet is that Cape May’s beaches will continue to be safe long after the fun and hard work of the competition is over.