People and events which go beyond tales of Victoriana and visiting presidents. Ancestry dating to colonial days. Remembrances of community life during the last century. Stories of life, love and loss — stories that never made the history books.

“The way I look at it, we’re going to leave a legacy,” says Emily Dempsey, a fourth generation African-American living on Cape Island. “Nobody can come up and say, ‘it never happened, we were never here.’ People ten, twenty, thirty, a hundred years from now can’t say there were no traces. We’ve documented the history and we’ve put it in a place where it will be cared for. People will look at it and say, ‘this happened in Cape May. This is part of the story.'”

And part of Cape May’s annals it is. 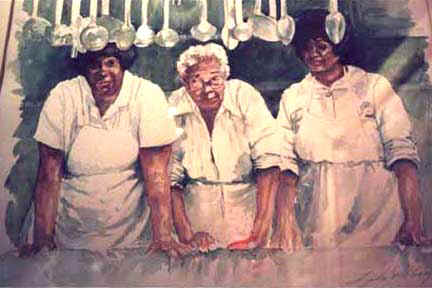 A portrait of the famous Chalfonte cooks: Dot, Lucille, and their mother Helen.

History books record founders with names like Shellenger, Hand, Leaming and Hughes, well-known to those familiar with Cape May. Most of these families owned large tracts of land and like many of their day, kept slaves. Early county records confirm slaves living in the area as early as 1688. Slaves with unfamiliar names like Armour, Lively, Cox, Squirrel and Coachman. And many of these African-American families remained in the area after the institution was abolished in the 1840s.

Records, as well as interviews with descendants, indicate a settlement of free blacks was founded around 1830 in Lower Township just north of Cape Island. By 1847, this settlement, known as Union Bethel,, was large enough to include a church doubling as a school and proper burial grounds.

A second settlement named Mount Zion was founded closer to Cape May City when jobs grew plentiful as Cape May flourished as an important summer resort towards the latter half of the 18th century.  In 1850 the county census finds one Harriett Tubman listed as living on Cape Island at Union Bethel and working in one of Cape May City’s grand hotels. Tubman had escaped slavery the prior year and history documents she then went to Philadelphia to work in the city’s hotels. Many of the city’s African-American population and those simply unemployed traveled to the New Jersey shore resorts — ever-gaining in popularity — to find work.

Though mostly through verbal tale, history recounts Cape Island’s role in Tubman’s Underground Railroad. Rumor on the island tells of various homes with secret rooms and long tunnels dating back to the Civil War. It is a common knowledge within the community corroborated by local historians that the railroad did indeed run through the island, with many of those “riding its rails” remaining in the area.
Though just remnants of the Union Bethel settlement remain and the church at Mount Zion no longer exists, the Mount Zion cemetery does. Suffering from years of neglect and decades of overgrowth, the cemetery was recently restored by the help of community and governmental volunteers. Headstones were found bearing names like Harmon, Squirrel, Lively, Trusty, Moore, Cox, Coachman and Collins — many dating from the Civil War era. These memorials pay tribute to descendants bearing the same names still living on Cape Island. Those now preserving this heritage for future generations. 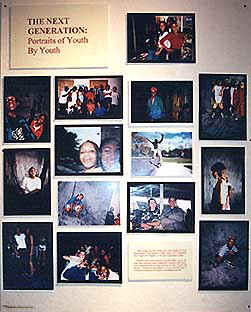 Co-sponsored by the Center for Community Arts (CCA) and the Mid-Atlantic Center for the Arts (MAC), the exhibit includes, among other displays, a look at employment in the Cape’s famous beachfront hotels including famed Chalfonte Hotel chef and author Helen Dickerson; the similarities between the communities of Whitesboro and Cape May; mementos through the years; the decades of prosperity and a photographic glimpse at the future by the next generation through their own eyes.

Since the 1997, CCA has shown the exhibits in schools, libraries and museums throughout the county.

“A Feeling of Community Revisited: Cape Island’s African-American Heritage” runs through February 27, 2000 at the Carriage House Gallery, 1048 Washington St., and admission is free. Call 884-5404 for gallery hours and further information.

Mount Zion Cemetery is located on Shunpike Road in Cold Spring, just south of the Cape May Canal.