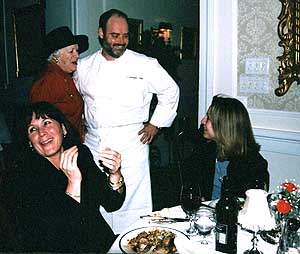 He’s cooked for Julia Child and at the James Beard Foundation. A graduate of the Culinary Institute of America in Hyde Park, New York, he’s worked in four-star restaurants from Philadelphia to Vail, Colorado. For seven years, he operated the Ebbitt Room at the Virginia Hotel in Cape May, leaving early last fall only to replace Tony Clark as executive chef at Philadelphia’s Sheraton Rittenhouse Hotel.

Since opening in the mid-1990s, Union Park Restaurant at the Hotel Macomber has gained a superior reputation for fine dining fare and finesse of service. When the restaurant closed for the winter months after losing its executive chef Michael Giampa, there was concern it might not reopen when it was put up for lease.

But the opportunity to lease Union Park was a chance for Hubert to finally be in business for himself. And one he couldn’t pass up. Indeed, Hotel Macomber owner Dale Hardin said, “From the moment we knew Chris was interested, we knew he was the one. And we knew we could work with him and trust him.” Dale’s wife Patricia agreed, “We had lots of interest from many chefs, but we knew Chris was it. We’re very excited to have him here.”

That the occasion brought Hubert back to Cape May from Philadelphia was the icing on the cake, so to speak. His wife Pam was born and raised here; they married in Cape May and have a three-year-old son, also born here. Hubert says Cape May is a “nice place to raise a family” and is really very glad to be back. 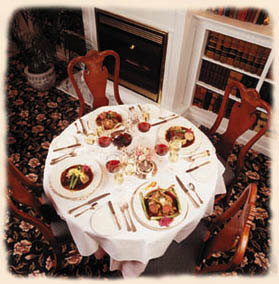 Visitors and locals alike can remember other Hubert signature dishes at the Ebbitt Room — the Cervena venison with a truffle tart and pomegranate jus which won him the Kump award, steamed black bass with water chestnut dumpling and a cilantro scallion aoli — which now appear on the Union Park menu, but Hubert has new creations specially designed for the restaurant and its established reputation.

Hubert says though the decor, style and silver service will remain the same, formal in a relaxed atmosphere — casual elegance, Cape May style — there will be no carry-over dishes from the former menu. New items include appetizers tuna carpaccio with artichokes, smoked salmon and Yukon gold potatoes as well as Vietnamese spiced beef and vegetable spring rolls with dipping sauces and entrees, according to season, like spiced stuffed pork loin with mustard spatzeli and a chili succotash.

Desserts are made in-house as well — classic creme brulee; banana chocolate bread pudding with a liquid center; sautéed brioche “French toast” with saga bleu and Sauterne wine —and Hubert plans to offer a selection of cheeses as an alternative.

The reputation for fine service as well as fare is not overlooked by Hubert. Most of his staff have been with him for years. “I like to train them young,” he laughs. “Mold them my way.” Many accompanied Hubert to the Rittenhouse from the Ebbitt Room and some have become chefs in their own right. Mason Mullock, who started working with Hubert at the Ebbitt Room when still a teenager, graduated from Hubert’s alma mater and has just completed a 26-country boutique cruise line tour serving as executive chef. He’s back between jobs helping Hubert open Union Park. Clay Brandenburg and Mark Brown, Hubert’s perennial sous chefs, are also on board.

Through March, the restaurant is open Friday, Saturday and Sunday nights from 5 p.m. Reservations are highly recommended. Having no liquor license, BYOB is encouraged. Hubert plans to remain open year-round and accommodate weddings and private parties.

Crystal Hardin, Dale and Patricia’s daughter and innkeeper, says “We’re really looking forward to a good season,” she said. “I’m very proud of the ‘union’ between Hubert and the restaurant. It gives even more significance to our name.”

Hubert and Union Park: perfect together.