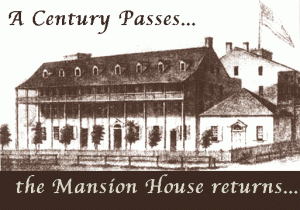 It was to the Mansion House that U.S. statesman Henry Clay came for recuperation after the death of his son during the Mexican War in 1847.

Built in 1832, it was the second grand hotel built on the island. Built on four acres of land, it was the first lathed and plastered hotel — its predecessor, Congress Hall, simply weather-boarded and sheathed.

Clay’s visit caused quite a stir in Cape May. Unfortunate for Mr. Clay who wanted nothing more than to be left alone.

“I must tell you the motives which brought me to the shores of the Atlantic,” Clay told a crowd of

admirers. “Finding myself in a theatre of sadness, I thought I would fly to the mountain top and descend to the waves of the ocean, and by meeting with the sympathy of friends, obtain some relief to the sadness which encompasses me. I came for private purposes, and for private purposes alone.”

His reference to the ocean he made quite literally. It is said Clay was an avid swimmer and would visit the beach twice daily. “It was while enjoying it (the ocean) that Mr. Clay lost a great deal of hair,” reads an 1897 account of Clay’s respite. “The ladies would catch him and with a pair of scissors carried just for that purpose, clip locks from his head to remember him by. When he returned to Washington his hair was very short, indeed.”

Five years later, Henry Clay died. And five years after that, the Mansion House burned to the ground

“The old, two-story house on Mansion Street has been here longer than anyone can remember,” the brief history on the back of the menu reads. “When my wife and I bought the house, eight years ago, we wanted to know exactly how old it was. After tracking the house back through old deeds, we discovered that the house was built in 1860.” 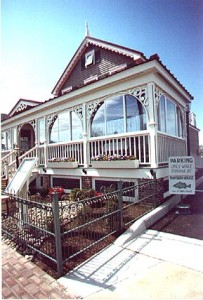 as “the Mansion House property.”

“I had never really heard of the Mansion House or knew anything of its history,” Perry Collier told CapeMay.com. “I couldn’t find any photographs of it, but I did find some old etchings and drawings. And at the county museum housed a copy of a guest register and an actual sign from the hotel.”
Collier’s initial intent was not to turn the building into a restaurant, but simply save the old house and land from being condemned by the city.

“There was concern the City of Cape May would tear down the house and turn the property into a parking lot,” he said.

With parking at a premium within the confines of this small city, Collier’s concern was real. He also owns Collier’s Liquor Store adjacent to the Mansion House, and in fact, he later found out, the very spot on which the original Mansion House stood. The store is already surrounded by a parking lot easily paving the way for more.

Mansion Street has long been home to the Collier family business. Perry’s uncle, Charles Collier ran a speakeasy there during Prohibition. After the Volstead Act was repealed in 1934, he built a nightclub — the same building now housing Collier’s Liquor Store. Perry’s father Harry, went into the business after being discharged from the Navy in 1945, eventually buying out Charles. In 1963, he turned the club into a liquor store. Perry has been in the business since he left the Army in 1963. 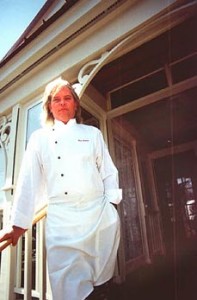 “In order to improve the property’s value, we decided to open a restaurant. A seafood restaurant,” Collier said. “When it came to naming it, there was no question. It had to be the Mansion House. And when it came to hiring a chef, Joe Lotozo was the only one I considered.”
Chef Joe Lotozo is well-known in Cape May. His first independent restaurant was the much-celebrated Bayberry Inn at Congress Hall. When the Virginia Hotel on Jackson Street opened in the mid-1980s, Joe was hired to launch the highly-successful Ebbitt Room. Through the years, Joe’s wife, Susan — “we’re both married to Susans,” Collier said affectionately — worked side-by-side with Joe at both the Bayberry Inn and the Ebbitt Room until their first daughter was born. A second daughter was born and Susan, an artist, decided to go into business for herself. Joe took a parenting leave to help his wife.

It took a bit of coercing to convince Joe to take the job, but Perry persisted.

“I’ve known him and his work through the years and admired it. Coincidentally, my wife and I ran into Joe and Susan in Paris. We had many meals together. When we decided to open the Mansion House, Joe was the only one I would consider. I look at it all as karma,” Perry laughed.

Joe told CapeMay.com there hasn’t been a restaurant in Cape May devoted to seafood for a long time. “We wanted seafood but also wanted to make it contemporary, upscale. I call this seafood with a twist.”

In designing the menu, he revisited the culinary influence of his travels in Asia and the

Caribbean. Appetizers like Go Ba, grilled rare beef filet with cellophane noodles and a Thai peanut sauce, and a seviche of scallops marinated in lime juice, coconut milk, chiles and cilantro illustrate both cultural influence and creativity.
Other appetizers such as chilled jumbo shrimp with a Bloody Mary Gazpaucho and fried calamari with aoili and a tomato-scallion relish reflect Cape May’s seafood industry and Joe’s desire to take advantage of the area’s bounty of seafood and produce.

CapeMay.com’s dinner at the Mansion House Seafood Restaurant sampling appetizers, entrees and desserts proved refreshing and invigorating. It was opening night — an evening which could have been fraught with disaster, and certainly one full of trepidation for all.

The grilled rare filet in the Go Ba appetizer was just that, cooked to perfection, the sauce rich and nutty with just the right amount of spice. The pan-fried oyster roast, oysters dusted with stone-ground cornmeal served with a Cajun remoulade and a pepper hash, was equally satisfying — the remoulade reigning supreme.

A calamari connoisseur ordered the dish. He was intrigued with the aoli sauce, tired of the typical marinara accompaniment so many restaurants offer. For those who don’t know, calamari is squid. It’s hard to cook properly — overcooking turns the squid quite literally to rubber — and the dish has to be served immediately or the crust gets soggy. The “squid specialist” declared the Mansion House fried calamari to be the best he’d ever eaten.

Though the Mansion House specializes in seafood, there is one beef entree and one duck entree available on the menu which will change seasonally. Cape May.com ordered two seafood entrees and the 21-day aged Black Angus filet for the token “landlubber.”

Destined to become a Lotozo “signature dish” is the Shellfish Pan Roast with Chorizo sausage, saffron rice and sofrito. Described as an “inside-out paella,” one of Spain’s national dishes, Joe’s twist on the dish bakes mussels, clams, shrimp, scallops, lobster and the day’s fish selection in a pepper, tomato and saffron base — called sofrito — and mounds the rice in the middle. Traditionally, the sofrito is stirred into the rice at the end of preparation.

Though the menu is quite sophisticated — Asian Bouillabaisse with udon noodles and wasabi rouille, cod filet in Moroccan spices, oven-roasted Florida Grouper with tomatillo-cilantro salsa, deep sea scallops with red pepper coulis, grilled Muscovy duck breast with a rhubarb red wine jus — it must be noted that special attention was given the child at the table. The pan-seared salmon dusted in curry accompanied with red pepper, carrot, cumin slaw and fried basmati rice with almonds, currants and green onions was a bit intimidating. The request for a simple piece of grilled salmon with haricots vert on the side did nothing to deter the smile or demeanor of the waiter — and she declared her meal “delicious.” 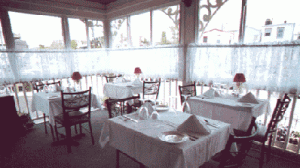 Though the restaurant is small, just three separate dining rooms on the first floor of a house, seating is not cramped nor must one strain to talk over a din of activity. The view may leave a bit to be desired — a parking lot out one window and the back of the Washington Street Mall out another — lace curtains amply add to the tasteful, sophisticated and somewhat whimsical design of the rooms.

Of special note is a reproduction of the original Mansion House sign (see above). Meticulously copied from the museum-housed original, the sign states the regulations of the house a la 1850. “Breakfast at seven and one-half o’clock, ” it proclaims. ” At table guests will take their seats at the foot as they arrive and proceed to the head as others leave the house,” it advises. “In order to prevent intrusions, a white flag will be on the bath house during ladies hours and red flag on the gentlemens,” it warns.

The sign is a Perry Collier treasure. Honestly, the entire Mansion House is. One can read it in his eyes and see it on his face. “The sentimentality of re-opening the Mansion House restaurant after one-hundred and forty-three years means a lot to me. Henry Clay stayed here for two weeks and like so many other buildings in Cape May, fire was its demise. I think what goes around comes around. And a Cape May treasure is back.”