Before the dawn of the automobile age, railroad tracks ran through mainland Cape May County. 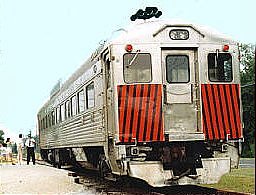 By the turn of the 20th century, the Atlantic City Railroad and the West Jersey and Seashore railroad competed for passengers, racing to Cape May on tracks set miles from each other. For many a summer wayfarer, buying a ticket to Cape May was the only way to travel. Train stations today mostly non-existent or shells of their former selves were once cluttered with passengers switching trains, boarding and disembarking. Stations like Tuckahoe, Cape May Court House and Cape May were the most used.

In 1933, the Atlantic City and West Jersey and Seashore merged and became the Pennsylvania-Reading Seashore Lines.

The age of train travel competed steadily with the automobile. During the 1920s, when automobiles became popular and affordable, railroads saw a deterioration in passenger volume. And this progress was the death knell for passenger train service to Cape May.

By 1981 all service to Cape ended. The rails carried freight to Tuckahoe until 1983. Then, for almost two decades, train tracks sat vacant and unused while the shore town tourist industry flourished just miles from the very tracks which created them in the first place.

But now the sound of train whistles once again echo off Cape Island, as refurbished trains again bring tourists to Cape May. This time, the trains are part of a local short line railroad, Cape May Seashore Lines.
Founded in 1984, Cape May Seashore Lines, owned by New Jersey Transit, is licensed to operate passenger rail service between Tuckahoe and Cape May, a 27-mile distance.

Currently, the railroad provides service from the 4-H Fairground north of Cape May Court House to Cape May, a distance of 13 miles, after the restoration of the Cape May Canal Bridge reopened passenger rail service to Cape May on June 12, 1999.

Cape May Seashore Lines CEO and president, Tony Macrie, began his railroad career as a track laborer for a Pennsylvania railroad.

Macrie rose through the railroad hierarchy, working as a track supervisor and a qualified engineer. As president of Cape May Seashore Lines, he reintroduced passenger train service to Cape May County, a marriage of conveyance and tourism. 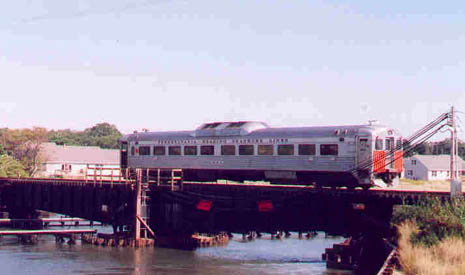 Besides the 4-H Fairgrounds and Cape May, the rail line has train stops in Cape May Court House, the county seat and commercial hub, and Cold Spring Village, a historical recreation of a 19th century hamlet.

“It’s like we’re re-inventing the wheel,” Macrie said of the current train service.

For just $8 for adults and $5 for children, passengers can board the train at the 4-H Fairgrounds and travel to Cape May round-trip. One way tickets cost $5.

Macrie hopes the train service depended upon by many past generations will remedy a modern problem: increased traffic in Cape May.

“It’s been very good for us. We carried a large number of people last year. We believe that’s a good solution for alleviating traffic and congestion problems down there,” Macrie said. “We hope the city would be more cooperative for using train. Its economical and an efficient way of moving people in and out of the city.”

Cape May’s traffic woes are the stuff of legend. A town with a 19th century street plan only had to deal with horses, buggies and pedestrians a century ago. Now, the influx of 21st century tourism has strained the city’s limit on parking spots and caused a burden on city fathers to find a solution.

Macrie believes Cape May’s rail line will cushion the city’s traffic malaise.
“We need to work closer with the city of Cape May. We need more cooperation. Parking garages aren’t the answer. You have to intercept people before they get into town,” Macrie said.

Wayne Piersanti, president of the Chamber of Commerce of Greater Cape May, attests to the railroad’s impact on the tourist industry. “Public transportation is very difficult to look at because we recognize we have to wean our customers from the use of their automobiles when they come to town,” Piersanti said. “With the train bringing people there are mixed reviews because we have a viable bus business bringing people in,” Piersanti said.

No parking for large busses exists in tourist-rich destinations such as the quaint Washington Street Mall or the many beach entranceways. Busses drop sightseers off at the historic train station, currently undergoing restoration to become the city’s transportation center. Piersanti said for many Cape May visitors not inclined to gas up and drive to Cape May, the preferred conveyance is the bus.

However, he added an “inter-modal” transportation system, one where the train and busses work in harmony, is what the city needs to reduce in-town traffic. By utilizing a jitney service already in place, train and bus passengers can freely move about the city, not worrying about traffic jams or finding all-too-elusive parking spaces.

“The problem with public transportation is if it becomes too cost effective, people will continue to use their automobiles. Automobiles are cheaper. To take the train from here to Court House is expensive. People will always rely on cars,” Piersanti said.

Macrie disagrees that the train is relegated to an antique curiosity bereft of benefits for travelers. An average rail car can hold as many passengers as 30 automobiles.

That’s 30 cars that won’t be causing traffic headaches in Cape May, Macrie reasoned. According to Macrie, passenger numbers for Cape May Seashore Lines increased 18-percent last year. “Besides being a tourist attraction, it’s actually a mini-transportation system. Besides being recreation, it’s honest-to-goodness transportation,” Macrie said.

The ghosts of a southern shore railroad may be resurrected with an ambitious new project planned to restore rail service farther north to Tuckahoe and maybe even Atlantic City. Exactly $3.6 million in funding is in the works by the New Jersey Department of Transportation (DOT) for repairing a trestle in Woodbine and track rehabilitation to Tuckahoe. If the state green lights the funding, passengers can park their cars in Tuckahoe and ride the 24 miles of track to Cape May.

“We get a lot of riders from Ocean City, Atlantic City and people driving down from Cherry Hill. You intercept them before they can drive the congested Garden State Parkway. We see the train opening more markets for us,” Macrie said.

Merry May, past president of the Greater Tuckahoe Merchant’s Association, an entity consisting of 40 members with businesses in Tuckahoe, Corbin City and Estelle Manor, believes Cape May Seashore Lines’ extension into Tuckahoe Junction could help with Cape May’s tourist traffic.

Map courtesy of Yahoo.com     Tuckahoe, a section of Upper Township in northwest Cape May County, lies along the Tuckahoe River, across from Corbin City in Atlantic County. In its salad days, Tuckahoe had a vibrant boating industry, and its train station brought scores of visitors to the shore. Now Tuckahoe hopes to cash in on the Cape May Seashore Lines’ plans to extend the track. The Tuckahoe train station is being renovated and local businesses such as craft stores and artisans shops are opening, hoping visitors will make Tuckahoe a stop in vacation itineraries.

“We’ve been behind the project to move it forward so South Jersey isn’t left behind when it comes to transportation,” May said. “It would bring people into town to park their cars near the station and commute to Cape May. It’s important in the summer so people won’t park in Cape May.”

May, owner of Schoolhouse Enterprises, a quilting shop, said parking in Tuckahoe is currently limited, but hopes the township will find a way to add more parking spaces so Cape May-bound motorists can park in Tuckahoe and ride the train to Cape May.

“Every time we have an event we hear people say, ‘When’s the train coming?'” May said. “We’ve been waiting for it for years. We hope legislators look our way and filter out funds for the project.”

A long-range goal Macrie sees as “inevitable,” one destined to change transportation for the South Jersey shore region is the tying in of Cape Seashore Lines with the Atlantic City line. If the New Jersey DOT and New Jersey Transit permit the lines to connect, visitors from Philadelphia and Atlantic City can ride the rails directly to Cape May.

But before that can happen, Cape May Seashore Lines must reach Tuckahoe.

Piersanti believes train service to Cape May will increase passengers only if tourists resist the urge to use their automobiles, a tough sell for many who view the car as a symbol of independence and mobility. “If the train becomes a more viable source of transportation, then people may start taking the train into town,” Piersanti said.

Macrie said train service is a sensible alternative to driving to the shore, battling for parking spaces, and constantly feeding parking meters. “Every shore community from Atlantic City to Cape May had rail service. That’s how those communities were built,” Macrie said. “People now would like another alternative to the automobile.”