One can quite literally see its affect on land and ocean, along the beach front and under bridges, on jetties and rock piles be it bay or sea, and on skiffs and dinghies and dories and cruisers and crafts of all shapes and sizes.

Its fervor is heard everywhere.

The gas station attendant invariably questions, “you catchin’ yet?” this time of year. “The weakies are running,” reports the mailman. And the woman standing in line at the local hardware store? That woman who’s a member of the Board of Education as well as the city’s Planning Board, and the one who manages the church food closet? “Caught a keeper striper yesterday!” she boasts.

Yes, fishing fever is here. It’s more like a fishing frenzy in Cape May, a town with eleven commandments — thou shall fish rounding out the bunch. A place where being “seaworthy” is next to Godliness. An island uniquely placed where the Delaware Bay shakes hands with the Atlantic Ocean.

Fishing begins earlier in the year in Cape May than in most other seaside towns along the New Jersey coast. The warmer bay waters lure mackerel and herring mid-March, followed quickly by weakfish and the most revered of all local fish — the striped bass, known simply as “striper” in these parts. To land a “keeper” striper, one measuring 28 inches or longer, is certainly a trophy to brag about.

Living by the sea — and for some, from the sea — generates extraordinary circumstances and responsibilities. It becomes a way of life with its own language, both verbal and physical.

Notice the barefoot man riding an old bike, milk carton strapped to the back and fishing pole in hand. Anywhere else, one would consider him secondary, hardly worth the glance. But in Cape May, he’s the vice president of one of the largest insurance agencies in the state.

Annually, spring fishing begins on land and sea. Party boat captains — those who earn their living running charters — fish for the mackerel and herring for use as bait during the summer months when fishing for the larger catch. During this mackerel “trip” as it is called, the fish are caught hand over fist, most poles averaging six hooks apiece. 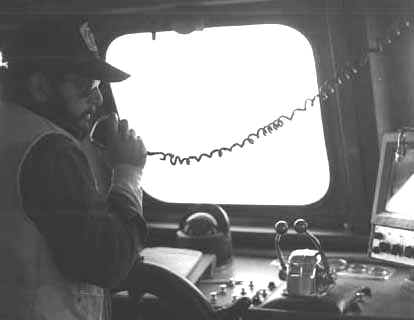 “Captain Fred” Ascoli runs the Miss Chris Fishing Fleet out of Cape May.

With eyes ever watchful and words matter-of- fact, his face does not belie the fact he’s a man who’s spent most of his life at sea – respectful and reverent of its ways, reaping its benefits. Living off the sea is a difficult existence, financially inconsistent at best and deadly at worst. A life governed solely by the weather where one checks wind conditions and tide tables as regularly as a landlubber glances at a watch.

But Captain Fred says he wouldn’t have it any other way. The sea is everything, he says and plans to fish as long as he’s able.

“I’ve loved to fish since I was a kid,” he told CapeMay.com. “And I’ve always liked taking care of other people fishing. My dad would take me out and I’d help net and cut the bait. As soon as I turned twenty-one, I got my captain’s license.”

Twenty years later, Captain Fred says his knowledge of ocean’s bottom is “priceless.” “Forty miles out, I know every wreck, hole, rock and slew,” he says. “I fish eleven months of the year in every kind of weather imaginable.”

From February through December, the Miss Chris ventures to the “rips” — the natural area at the mouth the bay where the “upwelling” of water entices marine life of all sizes to feed – and further.

“Between the weather, the varieties of fish and the ocean itself, no two days are ever the same,” Captain Fred says. “And that’s the challenge and thrill of it for me. I enjoy seeking out the fish and watching my charters catch them. For many it’s their first fish. Their excitement is mine, and that’s what it’s all about.”

So it seems it’s the challenge of finding and catching – whether keeping or releasing – that leads people to dedicate hours to the hobby and lifetimes to the profession.  On the water, or off, the same thrill is there.

For Bob Jackson, this thrill of the catch combines with a passion for nature.

He fishes the beaches, jetties and rock piles along the bay and the beach.  A surf fisherman, Jackson owns a bait and tackle store in West Cape May where he rents equipment and leads surf fishing expeditions. He told CapeMay.com it’s the same challenge on land as sea and of the integral part nature plays in a fisherman’s world.

“I come out here practically every day,” Jackson said during an interview on the beach. “Right now, I’m waiting for the weakfish to come in. I heard a few were caught already.”

Jackson explained his passion for fishing as he wedged the four poles into the sand. “I love the beach and the ocean, watching the birds and other life,” he said emphatically. “Watching the birds, where they flock and feed tells fishermen where to look.”

“This place we have here, this place we call home, is one of the most unique areas around. And I worry about it. If we don’t protect it now, it won’t be here for the next generation.”

“I don’t always take the fish home that I catch,” he continued. “Mostly I catch and release, unless I know I’m going to have it for dinner that night. I’ll never freeze fish, if I know I’m not going to eat it that night I always throw it back.”

Over-fishing, in fact, has forced state and national regulations on most types of fishing. The striper population, for example, was so depleted that strict rules have been enforced this last decade. Until this year, only two fish — both measuring 28 inches or longer — were allowed to be kept. This year, a third is being allowed and must measure at least 24 inches — a good sign that these regulations are working.

But over-fishing is but one threat Jackson sees. Over development and man’s seeming insensitivity to nature could put Cape May’s current “quality of life” as well as its economics in jeopardy. 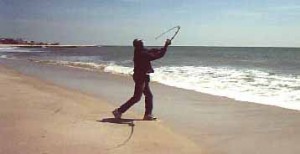 “Cape May is one of the world’s foremost bird migratory paths,” Jackson said. “Thousands of bird watchers from all over the world come here. The World Series of Birding is held here. And birds follow food. Over development removes exhausts their food supply and natural habitat.”

Jackson cites the town’s beach cleaning machine as another infringement on the environment. It’s a large sweeping machine which does its job well, removing all debris from the beach. Jackson thinks it does its job a bit too well.

“I remember for years there were huge amounts and varieties of crabs that lived on the beach,” he said. “Today I’m hard pressed to find any. The beach cleaner eats up that which they need to feed on. And remember, sea birds and fish feed on crabs. It’s all connected. And we as a people are connected to that, too. We must think about these things.”

Nature’s vulnerability is not lost on those who “fish the big ones” like marlin, shark and tuna. Beginning in  mid-June, these “sports fishermen” often fish near the 100 fathom line, locally called “the Canyon,” the edge of the Continental Shelf which attracts small bait fish that draw in the larger ones.

Captain James “Rookie” Heinold fishes the canyon every summer in various tournaments including the prestigious Mid-Atlantic $500,000 — one of the largest cash purses in the sport. Rookie — captain of the 48-foot Ocean Yacht Second Time Around — told CapeMay.com tournament fishing is a “gentlemen’s sport,” mostly catch and release.

“Most of the big fish caught in tournament fishing are catch and release,” he said. “Because there are no tournament monitors per se on the boat, your word is your honor. Often there are hundreds of thousands of dollars at stake. If you’re caught cheating, odds are you’ll never be allowed to enter another tournament.”

These fishermen go so far as to tag the fish before releasing them so they may be monitored by the Billfish Foundation, a non-profit organization conserving and enhancing billfish populations worldwide through scientific research, education, and advocacy. If by chance the fish is caught again, the original angler receives a plaque from the foundation.

Of course, not all fish must be thrown back and certainly not all are. Fish caught and cooked the very same day is commonplace in these parts. And it’s the rare resident seen during fishing season at a market buying fish. 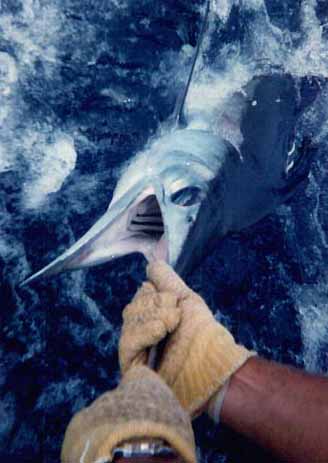 “Caught a bunch of weakfish, want some?” asks the neighbor around the corner. “How ’bout some sea bass? The drumfish are starting to run. I’m goin’ fishin’ next week. They’re good eatin’!”

Whether fishing the rocks, chartering a party boat or deep sea fishing, the thrill and challenge of fishing can be addicting. “Hooked on fishing,” reads many a bumper sticker in Cape May.  Smiled Jim “Rookie” Heinold, “It’s something you’ll never forget.”

Boat charters to the Canyon can be booked by calling the South Jersey Fishing Center at 884-0177.

And if you get lucky!

Striped bass has been long admired as one of the finest “eating fishes” around. Firm and white-fleshed, it’s subtle flavor can stand alone grilled, baked or pan-fried. For a delicious treat — especially with freshly-caught striper — try this simple beurre blanc sauce.

Combine shallot, garlic, lemon or lime juice and white wine in small saucepan. Over medium-high heat, reduce mixture to 3 tablespoons. Set aside. Grill, bake or pan-fry fish. Just before serving, return pan to low heat and whisk in butter, a piece at a time stirring just until soft (not melted), removing pan from heat if necessary, until mixture emulsifies. Spoon over fish and garnish with fresh chives, if desired. Serves four.

Tags: fishing, recipes, This is Cape May