In April, National Geographic Traveler Magazine published a story and provided readers with an Internet open forum regarding Cape May’s traffic problems. Interestingly, many pointed to the Cape May Seashore Line Railroad as a definitive answer to parking difficulties and traffic congestion. But some are not pleased with this “solution.” Author Brad Murphy presents the other side of the coin.
To many, the Cape May Seashore Lines Railroad is a pleasure to behold and to ride. A nostalgic mode of transportation that adds to the historic lure of Cape May, and according to some, one which could help alleviate the city’s traffic and parking problems.

But there is a group that is generally unhappy about the railroad’s return to Cape Island. And it’s a large group, one which encompasses Cape May’s second largest industry. 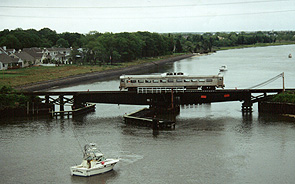 Many pleasure boaters and those who earn their living on the sea and in the bay dislike the swing bridge across the Cape May Canal which closes to allow the train to cross, delaying boat traffic.

After an 18-year hiatus, trains returned to Cape May last year. They operate on weekends during the late spring and early fall and daily during the summer, this year starting June 12. There are four round-trips scheduled daily between Cape May Court House and Cape May City.
Each trip requires the closing of the bridge twice, once on the southbound leg then again 40 minutes later when it heads back north. Usually, the canal is closed for five to ten minutes each time. When closed the boats must wait and depending on the season and the day’s weather, vessels can accumulate rather quickly on each side. Further delays are incurred when the bridge reopens and the boats try to navigate through the small channel.

Party fishing boat captains say that safety is the major problem. “From day one it has been a safety issue for the boating public in the canal,” said Fred Ascoli, captain of the fishing boat Miss Chris. “There is two-way traffic and only a single lane at the bridge. Boats have been hitting the bridge.” 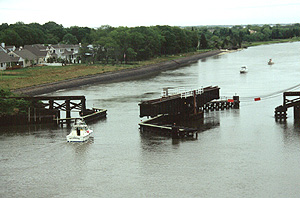 “There is another problem, the bridge does not work properly, it gets stuck,” he continued. “Last year there were boats that sat there for over an hour.”

He said that on one occasion he had to go out and around, and instead of arriving back at his dock at 5 in the evening as scheduled, he didn’t get back into port until 7 p.m.

Some of last year’s problems were due to brownout-related power shortages to the bridge on hot days, says Seashore Lines president Tony Macrie. But his company has since installed an automatic generator that kicks in when the power drops below a certain level.

Traffic congestion is another major concern.

“With the tide and a lot of boats there is going to be an incident,” said Bob Schumann of the Sea Star fishing fleet. “We’ve had our problems with it but lately it’s not been too bad.”

Paul Thompson, skipper of the party boat Porgy III said he’s living with the situation. “I can work around the problem,” he said. “I am aware of the schedule of openings and closings.” In addition to the advertised scheduled train crossings, the bridge tender announces it over a radio navigation channel and sounds a warning signal and swings the bridge closed.

When open, the bridge sits in the center of the canal and is aligned parallel to the boat traffic and water flow. While there are channels on each side of the bridge, only the northern passage is open to boating (see photos).

“There is no two-way traffic,” Thompson said. “So when the bridge opens there is a potential for problems.” Captains Schumann and Ascoli agreed. “We want to get the south side of the bridge opened,” Ascoli said. “We went to the Coast Guard and they are looking into it.” But there is much more to it than simply opening the channel. 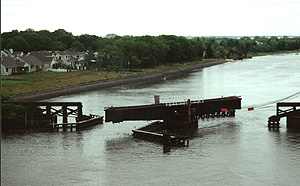 Currently, electric power cables are suspended relatively low over the southern channel. Additionally, there are no fenders to protect the bridge on that side, nor does anyone know for sure whether the channel has enough depth to support boat traffic.

The United States Coast Guard is looking at the situation, according to Waverly Gregory, a civilian Bridge Management Specialist with the Coast Guard.

“We are still trying to get it investigated,” he said. “We were asked by the marine community to open the south channel for bi-directional use. But the south channel has never been an authorized or a federally-maintained channel.”

Many things need to be done. Funding must be had, commitments need to be made and the environment must be considered.

“We have to find out who will maintain the fender system,” Gregory said. “Environmental issues must be addressed with New Jersey Fish and Wildlife Department, National Marine Fisheries, the Corps of Engineers and the Department of Environmental Protection (DEP). There are a lot of agencies to make application to. But we took this on for the mariners.”

He at first hoped that New Jersey Transit, owners of the bridge and track, would voluntarily take on the task, but this is not the case now. New Jersey Transit intends to stay with the historic status quo of the system, according to spokesman Mike Klusas. “It is only closed for 80 minutes out of 1440 minutes in a 24-hour day,” he said. “We and our predecessors ran the service until October 31, 1981. The bridge was then left open until we renovated it.”

“Basically all we are doing is following the historic patterns,” he continued. “Basically it is only open for a brief time in an overall day. We have no plans to make changes or to make Tony stop running his trains.”

“Whether there is one channel or two it really doesn’t affect our operations,” he said. “New Jersey Transit and the Coast Guard are responsible for any and all decisions regarding the issue.”

Gregory said that “Macrie goes above and beyond” what other rail lines do regarding their bridge crossings.

“The Cape May Seashore Lines Railroad has issued approximate times when the trains cross that bridge,” he said. “Normally boaters don’t know when a bridge is going to close.”