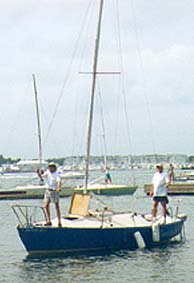 The sport of fishing is one that includes both luck and talent. Fate plays a big hand, as does Mother Nature. Being in the right place at the right time and knowing how to hook the “big one” – well, that’s what it’s all about.

As the daughter of a sport fisherman, I watched from afar, and learned to respect the ocean early in life. I saw the passion and enthusiasm this powerful body of water put into my father’s eyes.

The month of August is inarguably one of boating’s busiest. Be it the party boats, filled with first-timers heading out to the bay; 55-foot sport fishers, filled with tanned fisherman with stars in their eyes hoping to catch that big one in the canyon and winning a tournament’s big purse; or sailors, spinnakers flying, all vying for first place rounding the mark.

The Corinthian Yacht Club of Cape May hosts its seventh annual Volvo Leukemia Cup Sailing Regatta from August 11 to 13. Sailors compete in two days of sailboat racing raising funds for the Leukemia Society’s research grants and patient service programs. The Leukemia Society sponsors some twenty regattas around the nation including Annapolis, Maryland and San Diego, California.

Ralph De Simone, Leukemia Society public relations manager, told CapeMay.com that in the past six years the regatta held in Cape May has raised at total of $235,000 for the Leukemia Society – one of the most successful in the country. 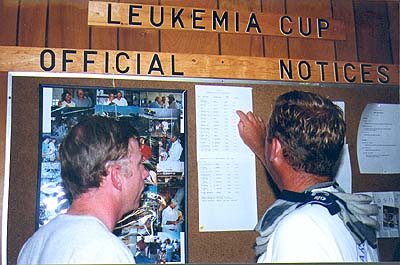 “The Leukemia Society does an outstanding job organizing the races. Their full-time staff does all of the leg-work and logistics of the event,” Schultz continued. “They organize the parties, dinners, and awards.”

Schultz, who has played an active role in organizing the regatta for the past seven years told CapeMay.com volunteer efforts from the Corinthian Yacht Club members also make the event possible. He said he has six to eight committees with more than one hundred people working to make the weekend a success.

“There’s something for everyone to participate in,” Schultz added, “It’s a family event.

A new addition this year is a Junior Sail-A-Thon. On August 11, young sailors, ages eight to 16, will participate in a sailing parade and help raise further funds for the society.

Raising money for to help those with cancer is the Leukemia Cup’s main objective. Being able to sail for such a worthwhile cause has made it one of the most popular events the yacht club sponsors. For all of their hard work and dedication, regatta participants receive awards and incentive prizes such as gift certificates and entrance into a nationwide drawing for a Volvo car and a $5,000 West Marine shopping spree.

All the incentive prizes are donated by national corporations and local businesses, and volunteers, like Lisa Thorndike, work throughout the year to collect them

Thorndike told CapeMay.com an auction open to the public is held the last night of the regatta with one of the prizes being auctioned off a one-night stay at the The Southern Mansion in Cape May.

Direct donations can be made to the Leukemia and Lymphoma Society, Southern New Jersey Chapter, 216 Hadden Ave. Suite 328, Westmont, NJ 08108.

“The Richest Marlin & Tuna Tournament in the World” 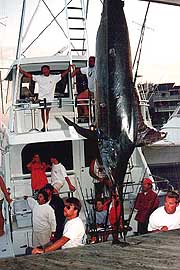 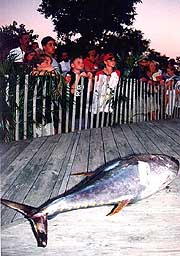 The Mid-Atlantic $500,000 Tournament, scheduled to begin August 20, is advertised by its sponsor, South Jersey Marina, as “the richest marlin and tuna tournament in the world.” This is indisputable, with $1,290,500.00 in prize money paid out last year alone. One hundred and fifty boats from California to Texas to New York travel annually to Cape May to participate in this tournament. The pressure is high, as are the expectations, while the captains and crew prepare for three days of competitive fishing.

The rules are simple and limited: five days are allotted for the tournament, each boat fishes only three of those days – the captain’s choice, and all-tackle International Game Fish Association (IGFA) rules must be followed.

Sport fishing, specifically off-shore tournament fishing, is truly the rich man’s sport. The entry fee alone is $6,000. This does not include money for calcuttas (side wagers), which are optional and cost an additional $10,000. Add on bait, tackle, food, drink, lodging, the captain’s wages, the mate’s wages, wear and tear on a boat, approximately $2,500 in fuel, you’ll find – excuse the pun – the tournament awash in money.

With over 2,000 people to accommodate during the week of August 20, assistant tournament director Rob Starr is a busy man. He did take a minute to talk to CapeMay.com. Starr told this magazine that fishermen participate in the tournament for the money but added that the other important aspect of the tournament is the friendly competition among the fishermen.

“The initial attraction to the tournament is the money,” Starr said. “But it’s just as much about the camaraderie.”
Starr said the Mid-Atlantic $500,000, now in its eighth year, was the first million-dollar tournament of its kind in the United States. It has started a trend of big money tournaments spreading from its origins in Cape May all the way to California.

The month of August comes to an end with a third boating event on August 30 in the Atlantic Ocean off Cape May. The Special Kids Fishing Tournament, begun in 1987, has become a favorite of local party, charter, and private boat owners and captains. These men and women forfeit a day’s revenue to treat the Association of Retarded Citizens’ members and coaches to a day of fishing.

Approximately 100 area boats participate in the tournament, the sole purpose being to show the more than 300 athletes and coaches a good time.

There’s no money involved — the owners, captains, and crews of the boats volunteer their time in exchange for the smiles and celebrations that follow the catch of a flounder, weakfish or even a pesky stingray.

The event is sponsored by the Cape May Marlin and Tuna Club, the Cape May County Party and Charter Boat Association and the Elks Lodge of Somers Point, New Jersey.

Bob Rasmussen, a member of the Cape May Marlin and Tuna Club, owns a 53-foot Ocean Yacht sport fishing boat and has volunteered his time and boat, Razzy’s Raft, in the Special Kids Tournament for more than ten years.

Tags: angling, fishing, sport fishing, This is Cape May