Robert Heinly, an interpreter and Museum Education Coordinator for the Mid-Atlantic Center for the Arts, is an authority on the life in Cape May during last half of the 19th and early 20th centuries.

This month and next cars by the hundreds will stream into Cape May. Once parked (an adventure in itself), tourists will browse in tiny and quaint shops along the Washington Street Mall, and frequent restaurants all over town. Families with small children will gather along the water’s edge, building sandcastles and swimming in the surf. Horse-drawn carriages will take passengers for leisurely sightseeing trips through the city’s bed and breakfast-lined streets. Ice cream, salt-water taffy and fudge will satisfy their sugar cravings.

Summer in Cape May is a calming yet vibrant experience. Being a tourist in Cape May means making memories in a place distinctly different from home. A century ago, in the Victorian age when American society emulated that of Great Britain, tourists flocked to Cape May too, foregoing the crowded streets of Philadelphia and New York for the calm cool breezes of the southern New Jersey coast.

From 1850 through the early 1900s, Cape May came into its own as a summer resort. In fact, those early tourists didn’t “vacation” in Cape May, says Robert Heinly. “They ‘resorted’.”

“Resorting” then was the equivalent of “vacationing” today. Later it evolved to become the noun, “resort,” which we use commonly today.

Not Half the fun…

Getting to Cape May was itself an adventure. Until the middle of the Civil War, in 1863, when railroads connected Cape May to Philadelphia, many shore-bound travelers made the arduous overland trek to reach Cape May on horseback or carriage. The 100+ mile trip took two to three days, with overnight stops at inns and taverns along the way.

Late in the 1870s, another popular means of getting to Cape May was by steamship, the most luxurious of the time being “the Republic.” A large side-wheeler, she would leave from Race Street in Philadelphia and sail down the Delaware River and across the Delaware Bay. Passenger boat traffic landed at Sunset Beach, with passengers reaching Cape May by coach via what is now Sunset Boulevard, then a clamshell-covered road.

Again Robert Heinly: “With the arrival of railroads, you had the arrival of day trippers. Back in those days, they would call them ‘excursionists.’ Today we call them ‘shoobies.’ The quicker transportation allowed less wealthy people to take day trips; wealthier people were here for the whole summer.”

The length of stay in Cape May was different than by today’s standards. Modern tourists come to Cape May mostly on summer holidays and weekends; some rent rooms, apartments or private houses for a week or two or maybe a month. The Victorians, especially the well-to-do, spent the entire summer (June through late August) in Cape May, enjoying a large stretch of time in their “summer cottages.”

In the pre-Civil War years, some families brought their servants with them or they hired local servants to assist them. For those Victorians renting houses, the landlords sometimes provided servants with the house. With over two months to kill, one wonders what these early tourists did with their time. Much of the what Victorians did then isn’t very different from what modern tourists do at the shore; they just had more time… and fewer conveniences.

Bathing on the strand 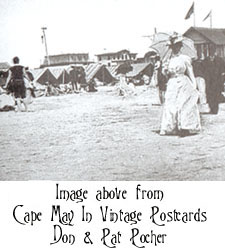 The primary reasons Victorians resorted in Cape May were “bathing upon the strand” (a euphemism for swimming in the ocean) and “promenading” (taking walks through town). Strolling the streets of Cape May, gentlemen in their straw hats and ladies with their parasols, couples could have a relaxing chat with a touch of intimacy in public. “They were really into promenading because it was one of the few socially acceptable ways that couples could actually touch each other in public,” says. Robert Heinly:

As Mr. Heinly puts it. “In the beginning of the Victorian era, bathing upon the strand was regulated according to gender. White flags flying on the sand designated timeStockton Beach 1907 from Cape May in Vintage Postcards by Don and Pat Pocher for ladies to use the beach, and red flags flying meant the beach was ready for the men to use. The flags would change every few hours during the day. The only time that a man was allowed on the strand when those white flags were flying would be if a Victorian lady became distressed and required male assistance. As the era progressed, more and more Victorian ladies almost on a regularly scheduled basis were becoming in need of male assistance by design. By the middle of the Victorian period, in the 1870s, men and women bathed together.”

The choice of bathing attire was very different in the Victorian era. “When they bathed, they were very much concerned with modesty, especially the women. The men on the other hand, were known to go naked, but then bathing suits came into style, especially when the two sexes were together on the beach.”

Victorians changed into their swimming attire in bath houses and tents that sprang up along the Cape May strand. According to Heinly, “You’d never be seen in town in your bathing attire. That was totally classless and vulgar, so they would always change in and out of their bathing attire on the strand.”

Bathing suits differed drastically from today’s standards; no bikinis for women or brief-shorts for men. The Victorian virtue of modesty played a role in how one was attired at the beach. For the men, bathing attire consisted on a tank top and trunks resembling biking shorts. Women wore full outfits, covering even their ankles and forearms.

Prudishness and Victorian demure didn’t end at what women wore on the strand; it also influenced how they entered the water.

Again Robert Heinly: “Some Victorian ladies were so modest that they had things called bathing wagons. Picture an old covered wagon going west, and you would back that up with the women in it into the water and the bottom would open and they’d bob around inside and no one would see them bathing. If they were adventurous they’d wade around and hold onto the outside of the wagon.”

That whiter shade of pale

One thing popular with today’s tourist was definitely not popular with the Victorians; sunbathing. Pale skin was the desirable look.

“One of the things [Victorians] didn’t do was tanning on the beach. They viewed a suntan, especially in ladies, as a sign of the working class that had to be laboring in the sun all day. They went the opposite way and cultivated a very pale skin color,” Heinly said.

The porch became the focal point for life in Victorian Cape May’s many homes. Large, wrap-around porches offered shade from the elements but exposed visitors to the salty air. Many Victorians sought respite in the cool refreshing atmosphere the porches conveyed, often spending hours talking and sharing gossip.

“The porch in the summer was the social center. They’d talk to people passing by or have readings. These were very status-climbing social people, and this was also a great way to check up on each other.”

The town’s major hotels would often sponsor weekend balls and less-formal dances called “hops.” These major social events were popular and widely attended. Some hotel owners hired local bands of musicians brought from Philadelphia or invited groups in the entertainment circuit to play.

Being a good sport

“New things were happening in the Victorian era. There was a wonderful new invention called the lawnmower which allowed relatively smooth, flat lawns as opposed to when the goats would come and eat the grass. With the lawnmower came the advent of tennis, croquet and golf. Popular recreation in and around Victorian-era Cape May included lawn sports (badminton, croquet and tennis) and a new sport called baseball. Games were played on the Congress Hall Hotel lawn and at a ball park on Columbia Avenue.

Robert Heinly: “There was a regular summer league. Cape May was a power in that league. Interestingly enough, the restaurant owners would get together and recruit the best baseball players from Princeton, Penn and Rutgers and get them summer jobs here so they would play for the Cape May team. Cape May dominated the summer shore league.”

As it is today, bicycling was also popular with Victorians, with bicycle ovals and tracks in West Cape May north of Sunset beach.

When they weren’t peddling their cycles or promenading, some Victorian tourists enjoyed horseracing. Around the 1870s a racetrack in Town Bank provided amusement and sport, but the track folded at the close of the 19th century. Town Bank still shows evidence of the racetrack with two streets; Clubhouse Road and Race Track Drive.

Yachting was also a popular pastime in the late 1800s But “yacht” for Victorians meant any boat, not just luxury vessels. Fishing wasn’t popular as a sport in early Cape May by the wealthier guests. According to Heinly “They liked fishing, but it wasn’t as major as today because it was kind of dirty. They did more boating than fishing in the Victorian period. Later on, fishing becomes more popular than boating, which it is today.”

So except for soaking up the sunshine, it seems no matter what you do in Cape May this summer, the Victorians have likely “been there and done that” – and maybe even more.