CapeMay.com’s first in a series of “Postcards from Cape May” is from the classic collection of Don and Pat Pocher, to whom we are indeed grateful.  A wider selection has been published in their book, Cape May in Vintage Postcards, one of Arcadia Publishing’s  “Images of America” series.  The accompanying descriptive text is mostly from that book.

Series One: “Destroyed by Fire”

About 1911, Joseph K. Hand used old engravings and photographs for a series of at least 6 cards illustrating early hotels lost to fire. 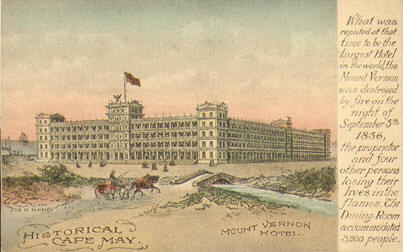 Started in 1852 on 10 beachfront acres near Broadway, the monumental Mount Vernon Hotel boasted hot and cold running water, a gasworks, pistol galleries, ten-pin alleys and accommodations for 2,100 before its post-season devastation. 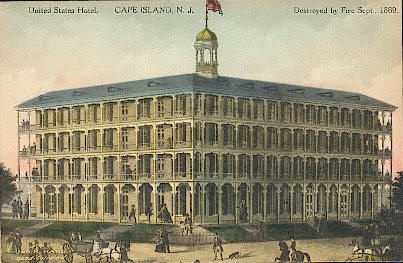 The United States Hotel, built in 1853 once stood at Washington and Decatur Streets.  One windy August morning in 1869, a fire that began at the nearby Pearl Diver’s curio shop quickly engulfed the hotel and its neighbors.  Fortunately, Camden sent volunteer firemen and apparatus 90 miles by train to “extinguish the raging flames.” 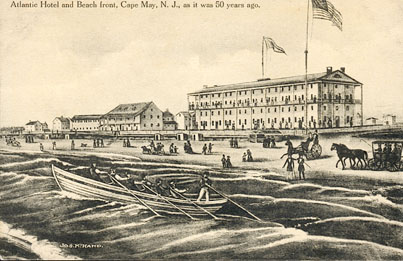 The New Atlantic (pictured 1848) also a victim of the 1869 fire was built on the east side of Jackson Street by Philadelphia’s McMakin Brothers, Delaware Bay steamboat operators. The Atlantic was the first Cape Island hotel with a painted exterior. 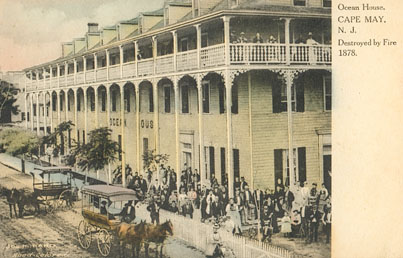 Cape May’s Great Fire began in the vacant Ocean House, on Perry Street at about 7 a.m. on November 9, 1878, shortly after proprietor Samuel Ludlam had left his insured establishment for Philadelphia.  Firemen struggled to subdue the flames that swept rapidly from building to building, destroying over 35 acres by evening. 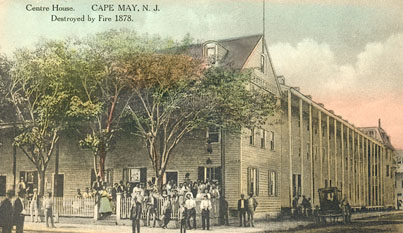 Centre House, completed in 1840, was another victim of the Great Fire.  It was still morning when the fire jumped back across Perry Street from its second victim, Congress Hall, to envelop Jeremiah Mecray’s hotel, shown here with its Jackson Street wing on the left and tall columns extending along Washington Street to Perry on the right. 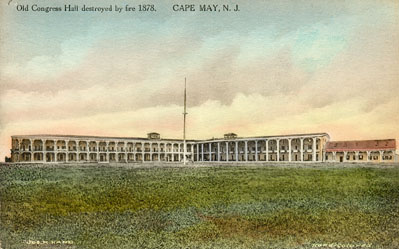 Congress Hall, c. 1875. When Thomas Hughes built the first large hotel on Cape Island in 1816, dubious residents nicknamed it Tommy’s Folly. Hughes election to Congress inspired the present name.  Shown here is the enlarged frame 1854 building, which sat on 7 acres stretching from South Lafayette Street to the beach and from Perry to Congress Street.c. 1875 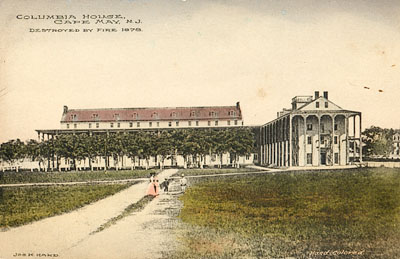 Captain George Hildreth chose a swampy meadow between Ocean and Decatur Streets for his Columbia House in 1846.  By 1850 it had expanded to be the largest and most “aristocratic” on Cape Island.  Though Columbia House escaped the 1869 fire, it could not be saved in 1878. 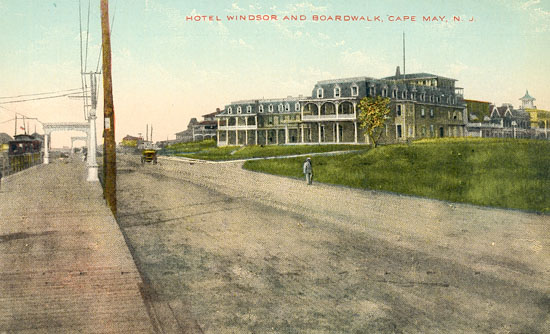 c.1920. The Windsor Hotel was popular through the 1960s, but, instead of celebrating its centennial in 1979, it was destroyed by a suspicious fire.  (In this card, note the trolley between the beach and the boardwalk) 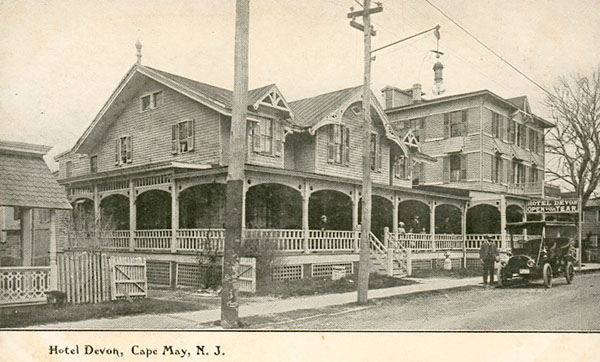 And just when Cape May thought it had seen the last of fire destroying old frame hotels in town, The Hotel Devon on S. Lafayette St. (which in recent days was managed by a condominium association) burned to the ground in Winter of  2001. Picture c.1907-15.