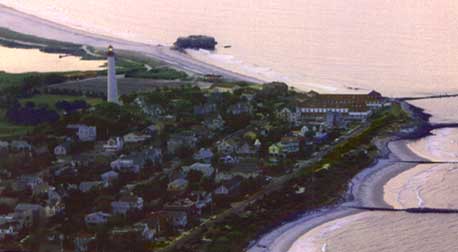 If you asked ten people “What and where is Cape May Point?” you’d probably hear ten completely different answers. For instance:

“It’s a little piece of heaven.”

“The lighthouse is there.”

“That’s where the birds migrate.”

“They have a big lake there, don’t they?”

“We have a very special place. People who live here and people who visit can feel it.”

Geographically, Cape May Point is the southern-most tip of land on the Jersey Cape, the spot where the Atlantic Ocean mingles with Delaware Bay. This sometimes violent mingling has washed portions of the area, including streets and houses, completely away.

Politically, Cape May Point is a municipality with its own mayor, post office, fire department, one general store and just over two-hundred registered voters in less than one square mile. The summer population swells to four and five thousand. What this town lacks in size it makes up in heart and spirit.

“For our size, we’re a very concentrated bit of energy,” said Sachs, who has served on the Cape May Point Environmental Commission for fifteen years, the last five as chairperson. “We’re all naturally inclined here.”

This natural inclination has resulted in a town that now serves as a model for other communities not only in Cape May County and New Jersey, but throughout the country, especially along the coasts. Zoologist Eric Stiles, who works for the New Jersey Endangered Species Program calls it “a model community in the use of planning to sustain a high quality of life. People lament something once it is gone; Cape May Point is a strong example of what a community can accomplish.”

What has been accomplished seems nothing short of amazing in light of the current real estate frenzy. In spite of skyrocketing land values and booming growth all around it, Cape May Point has managed to hold on to its small town “feel.”

While neighboring Cape May revels in her history and celebrated Victorian architecture, Cape May Point residents quietly cherish their natural wonders. Sachs listed them, “Two kinds of beaches, ocean and bay, a lake, a circle park lovingly landscaped to attract birds and butterflies and the Cape May Bird Observatory, all within a ten minute walk of each other.”

But what makes those features so unique and gives the whole place an extra special feeling is what was done well over a decade ago to protect habitat for migrating birds. Sachs and her husband Walter (who served on the borough council until his untimely death) realized in the mid-1980s that there was very little in the way of planning ordinances on the town’s books. Walter, who had taught city planning at the University of Pennsylvania “had the tools to explain planning and educate the community,” explained Sachs. “He felt he was saving the town. Some people thought he was meddling, but he helped keep it the way it is.”

There were some feelings against the new ordinances, but most of the residents supported them. “The landscaping ordinance came from the people, not the government,” asserted Keith Rice, president of the Cape May Point Taxpayers Association. “We are a very environmentally-conscious community, because we’re a stopover for migratory birds and butterflies. We’re different from most shore towns; we have no stone lawns, no houses five-feet from each other, we wanted to maintain the green look.”

Perhaps the most important ordinance is the dealing with landscaping and vegetation, or naturally growing plants, trees and vines.

“What precipitated it was seeing lots indiscriminately cleared,” Sachs went on. “We said, ‘We’ve got to do something to preserve this.’”

Pat Sutton, Program Director at the Cape May Bird Observatory remembered 1987 when three lots next to the Bird Observatory were “bulldozed flat. It was appalling. The community was appalled. Pebble lawns were going in. The Environmental Commission under Sally and Walter got active. They had a lot of work cut out for themselves.”

Sixty-seven ordinances were passed. One of the new laws set limits on how much floor space a home could contain relative to the size of the lot it sat on. “Walter knew the importance of town planning,” related Malcolm Fraser, mayor of Cape May Point for the past eight years. “Seashore communities were growing topsy-turvy in the 1980s. He was trying to keep Cape May Point from suffering the wall-to-wall building that is in many communities.”

The Bird Observatory was trying to help Cape May understand what they were sitting on, or under, or both. “Cape May is a crossroads of migration,” explained Sutton. “Millions of songbirds, shorebirds, hawks, owls, bats, butterflies, and dragonflies migrate through this area every year.”

Sutton began Operation Flight Path and the Backyard Habitat Program in 1987. “The Atlantic City casinos were going full steam, and a lot of growth was being funneled into Cape May County,” remembered Sutton. Acres of bird habitat were being transformed into manicured lawns. “Rather than be depressed, I thought I’d see what I could do with what I had to work with.”

She put together a handbook describing which trees, shrubs, vines, and perennials are most important to birds for food and cover. All are native species, plants that grow here naturally, rather than Asian ornamentals, and those birds look for to find food and shelter when they arrive here on their long journeys. They include trees like the Red Cedar, American Holly, Crab Apple, and Wild Black Cherry. All are uniquely adapted to weather and soil conditions found in this area.

Her work wasn’t lost on the residents of Cape May Point. “We shared a way of thinking and made information available. They were made aware that this is a really special thing they own. They embraced the idea; it makes sense.”

“Everyone here realizes how important Cape May Point is internationally. We are the last gas station for birds and butterflies,” said Sachs. “If we took it away, where would they be?” 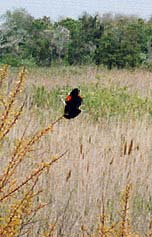 Eight years later, the state required each community that draws water from Cape May’s wells to pass a landscape ordinance similar to the one Cape May Point had worked out.

Both Cape May and West Cape May looked to Cape May Point and patterned their ordinances after the Point’s. “Indeed we were ahead of our time,” reflected Sachs. “This community is a very thinking, caring group of people.”

What surrounds Cape May Point besides the ocean and bay contributes to its natural ambiance as well. Its neighbor to the northeast is Cape May Point State Park, which in addition to the famous lighthouse, contains miles of trails through a gorgeous maritime forest and several fresh water ponds. The park, until it was turned over to the state in 1962, was a World War II U.S. Navy coastal artillery unit.

Beyond the park, lie the South Cape May Meadows. Donated to the Nature Conservancy, these acres of open space provide habitat and feeding grounds for the huge numbers of birds that migrate through Cape May each year.

On the other side of the Point is Sunset Beach, a popular spot for visitors to search for Cape May diamonds, bits of quartz which have been polished smooth by the surf. Just past the waves, rest the remains of the Atlantus, a two hundred fifty-foot “concrete” freighter built during World War I.

Intended to serve as a dock for the Cape May -Lewes Ferry, this mass of steel and concrete broke free from its mooring during a storm and became stuck bow first in the sand where it sits today, lapped by gentle waves.

Heading north again is the site of what was once the Northwest Magnesite Plant.

Closed decades ago, the land has recently been purchased by the state to remain as open space. Ornithologist Witmer Stone studied birds there in the early 1900s, publishing the findings in his Bird Studies of Old Cape May. After his death in 1939, the land became the Witmer Stone Wildlife Refuge, until 1942 when the magnasite plant was built to supply special bricks used in manufacturing steel. One can’t help but imagine that Stone would be pleased to see this land once again dedicated to wildlife. Next to it is Higbee Beach, a State Wildlife Management Area running all the way to the Cape May canal.

Cape May Point and its surroundings have become a popular destination for visitors and locals alike. Many consider a bicycle ride to the Point to enjoy the circle or walk around Lily Lake – an essential part of the Cape May experience. Birding has grown in popularity so much that the state last year quadrupled the size of the hawk watch platform in Cape May Point State Park.

The area continues to attract bird lovers, some eventually buying homes here. Judy Lukens and her husband Karl bought a second home at the Point four years ago made it their permanent home this year after retiring. They now work for the Bird Observatory as volunteer associate naturalists, chosen for their birding skills, and lead five or six birding expeditions every week.

Judy tried, too, to put Cape May Point into words. “I love it here,” she said. “I love the quiet, I love being out seeing migrations in progress everyday. I feel like I’ve been here forever.”