On June 7-8, 2002, Congress Hall Hotel opened its doors once again in Cape May.  More than a grand moment …it’s a  significant step in Cape May’s future.

For years, she sat facing the sea, slowly fading away, sadly remembering bygone days of splendor,  her grand evenings of mingling with the rich and famous, and afternoons listening to celebrated entertainers — days when she reigned as queen of  Cape May.

She was one of many large hotels in the late 1800s that catered to the elite. Massive hotels they were, with broad verandahs and sweeping lawns facing the ocean. Most have perished, victims of modernization.

Of the handful that remain, Congress Hall is one of the largest and best known. 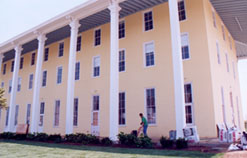 And if ever a faded queen deserved a $22 million facelift, this one does.

It’s a warm and sunny day in late May and she looks positively radiant in her new yellow coat. Coat of paint, that is.

Multitudes of construction workers buzz like bees around the hive, painting this and nailing that. Everyone is pitching in — the hotel’s new chef Kevin Pomplun is steam cleaning the lobby’s marble floor; two women peer from the top of the lobby’s front desk, organizing papers and ledgers, all the necessities for welcoming guests; and even Curtis Bashaw, co-managing partner/owner of Congress Hall is 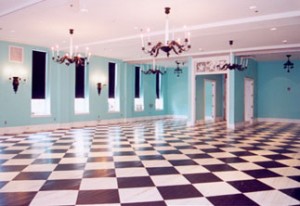 getting in on the act, lugging the paintings which will adorn the inside walls.

These are the finishing touches to the $22 million renovation of Congress Hall, Cape May’s foremost historical landmark. Finishing touches to a project that used 75 tons of steel, 47 miles of wiring, 2,400 gallons of paint, 11 miles of plumbing pipe and approximately 650,000 nails — much more than a simple facelift.

And the renovation was the easy part. Getting to the point where restoration could even begin was much more difficult. Impossible, some said. Even Bashaw considered throwing in the towel, if only for a brief moment. One might honestly say the renovation of New York City’s Grand Central Station was easier — at the very least, less complicated. 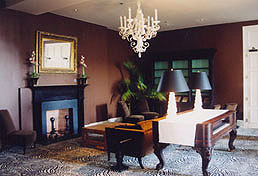 Congress Hall was built in 1816 as a simple boarding house. The owner, Thomas Hughes called it “The Big House.” Local people had other ideas, convinced the building was far too large to ever be successful they nicknamed it “Tommy’s Folly.” Though fire destroyed the original wooden building in 1878, it was quickly rebuilt, this time of brick. Between 1880 and 1920, Congress Hall served as Cape May’s “premiere” destination hotel and was nicknamed the “Summer Home of Presidents” when Presidents Buchanan, Pierce, Grant and Harrison set up summer offices in the hotel.

Early hotels were quite different than those of today. Congress Hall housed a single room which served as the dining room for all guests who stayed in simple partitioned quarters on the two upper floors. The walls and woodwork were bare and supplies of provisions were at times unreliable. 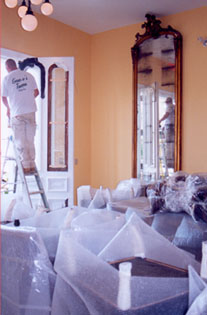 The sprawling lawns of Congress Hall were as important as the hotel itself. The nation’s burgeoning ardor for the sport of baseball spread throughout Cape May in the summer of 1865, and the lawns of Congress Hall hosted the county’s first game played between the Athletics of Philadelphia and nine “gentlemen” vacationing at another hotel. The local paper boasted, “The tour of the victorious Athletics of Philadelphia witnessed no better battling and fielding than that displayed yesterday.” It may be said the sport hasn’t changed very much.

Nationally-renowned bandleader John Philip Sousa played on the lawns of Congress Hall as well and composed the “Congress Hall March” in honor of Congress Hall owners H.J. and G.R. Crump who erected a special seashell-shaped bandstand for Sousa.

At the turn-of-the-century, one Rose Halpin operated the hotel as a kind of “speakeasy” flowing with liquor and complete with gambling slot machines. Though the hotel itself was closed during World War II, her lawns saw Ann Dupont, “Queen of the Clarinet” along with her “Rhythmen” drawing large crowds on the lawns of Congress Hall. 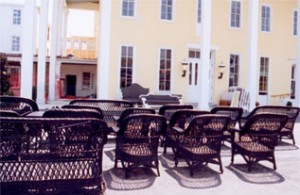 Congress Hall was last renovated in the 1920s when bathrooms were installed and rooms enlarged, reducing the total number of rooms from 300 to a little over a hundred. From 1968 until 1995 Congress Hall operated as part of the Cape May Bible Conference led by Reverend Carl McIntire of Collingswood, New Jersey . McIntire also purchased the old, vacant Admiral Hotel as well as the Windsor Hotel which stood next to Congress Hall.

The Windsor burned to the ground in 1979; the Admiral was demolished in 1996. (see below). And so Reverend McIntyre’s grandson, Curtis Bashaw was left with the last of the three great old hotels, Congress Hall. By the late 1990s, she was in dire need of repair.

Bashaw, along with Congress Hall Partners LLC, applied for federal and state funding to rehabilitate the building. With this funding came strict guidelines regarding historical integrity.

“The devil is in the details, but God is too,” said Department of the Interior National Historic Landmarks Manager Bill Bolger during a November, 1998, visit to Cape May regarding the renovation. 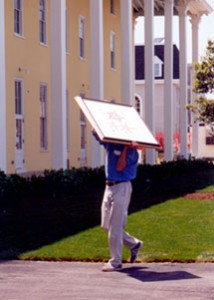 “The building is in desperate need of repair,” he said. “It has to be saved. It’s a very important part of the town. I want the building preserved.”

But financing such a large project was difficult, to say the least.

“When we first looked for financing, the banks didn’t want to underwrite it as an entire hotel because there couldn’t be enough money made. They wanted to ‘condominiumize’ the fourth floor leaving 70 rooms instead of 102 as a hotel,” Bashaw said. “I didn’t want to do that. I felt nostalgic and wanted to keep the whole thing a hotel so we looked at other avenues through the New Jersey Economic Development Authority which led us to the Housing and Urban Development fund. The whole reason we shifted to preservation was not to have to ‘condominiumize’ and destroy the building’s historical integrity.”

Both state and federal funding was eventually approved with the City of Cape May chipping in approximately $600,000.

Many in town were skeptical as to Bashaw’s intentions. And city funding didn’t help. One group formed to stall renovation efforts, another filed a lawsuit over Bashaw’s parking lot plans. 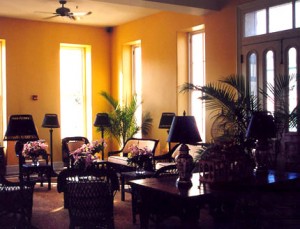 As with any large facility, space for parking has to be provided. Cape May already has an existing parking problem — there just not enough space on the tiny island. Bashaw’s original plan to provide underground parking at Congress Hall was immediately shot down, so he turned to the lawns. According to Bashaw, for the building to last another hundred or so years, it must be economically viable. Providing parking is imperative, he said, and plans for a conference center addition would bring the old hotel into the twenty-first century— which, of course led to more controversy.

Department of Interior guidelines are very specific and state, “new additions, exterior alterations, or related new construction shall not destroy historic materials that characterize the property. The new work shall be differentiated from the old and shall be compatible with the massing, size and scale, and architectural features to protect the historic integrity of the property and its environment. New additions shall be undertaken in such a manner that if removed in the future, the essential form and integrity of the historic property and its environment would be unimpaired.”

“There is no reason new construction, additions and restoration cannot become an intricate part of Cape May for years to come,” said Bill Bolger. “They can become, in their own time, contributing parts of the town.” 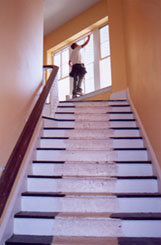 He admitted setting new construction guidelines is extremely difficult. “The worst building I’ve found is the one designed by a committee,” he says, adding that basic regulations should “prohibit the building of Victorian imitations.”

Bolger said Cape May is leading the nation in the field of preservation in many ways. Other towns today look to Cape May as an example.

“The most damaging thing is for a town to be frozen in time,” Bolger continued. “We should preserve the town and add to it.” New Jersey State Historic Preservation Specialist Daniel Saunders calls this a “new design challenge area” and says the field of preservation is “very young.”

As Congress Hall prepares the finishing touches, with a Grand Opening Gala set for Saturday, June 8, this project could well pave a new way for the field of preservation.

A Matter of Historic Preservation…

In 1976, the entire City of Cape May was designated a National Historic Landmark (NHL) by the Department of the Interior — one of only a few towns or cities with “entire city designations.” 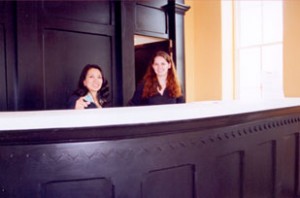 This NHL distinction brought Cape May into the national spotlight, fueled further by the city’s then Mayor Bruce Minnix, director of the soap opera Search for Tomorrow whose brief appearance on What’s My Line? (the panel knew him as a television director, the question was “What’s his other line?).

Cape May ’s tourist industry is successful today due primarily to the landmark distinction. But with this honor come many rules, regulations and restrictions. And those who live here care immensely about the town’s character and historical integrity. Emotions run high.

600 Victorian buildings are considered “contributing structures” and a few considered “anchor” buildings. Congress Hall is one of these anchor buildings as was the Christian Admiral, as Dr. McIntire renamed it. The McIntire years were tumultuous, to say the least. In the summer of 1964, McIntire moved his four-year Christian liberal arts school Shelton College from Ringwood , New Jersey to Cape May . His plan was to develop a 24-acre campus behind the Christian Admiral. A fundamentalist minister, it wasn’t long before he became entangled in extended

controversy with city officials over taxes and zoning. The college lost state accreditation failing to meet New Jersey Department of Education guidelines and academic standards. Eventually, he moved the college to Florida .

Running the Christian Admiral as a bible conference center and the Windsor Hotel as an inn, McIntire crusaded to obtain tax-free status for his holdings as part of a religious institution. At one point, he and his followers seized the beach in front of the Christian Admiral to protest against his treatment by city government.

He lost his bid, the buildings fell into disrepair and he eventually filed for bankruptcy. In 1979, the Windsor Hotel burned to the ground. Arson was immediately suspected, but never proven, though the wind was blowing just right, and the beachfront land worth a small fortune.

In 1996, the Christian Admiral was demolished. Neglect and new building codes forced changes the hotel would never recuperate from. McIntire’s grandson, Curtis Bashaw, explained the reasons such in a 1996 interview with the Cape May Star and Wave: “First it was the transoms — those lovely glass windows above the doors that tilted into the room. They had to come out … then the doors had to have sheet metal tacked on the back … the gorgeous stairwells had to be enclosed … the long corridors shortened and the old fire towers enclosed. One thing led to another — code upon code — none of them unexplainable, but nevertheless closing up the place. Rehabilitation costs were in the tens of millions.”

The demolition of an “anchor” building put Cape May on the Department of Interior’s “threatened National Historic Landmark” list in 2000 causing much furor among townspeople and city government.

According to the average man on the street, McIntire had struck again, this time in the guise of his grandson, Curtis Bashaw. That Bashaw had inherited Congress Hall and was intending renovation, simply heightened mistrust. Would Congress Hall be the proverbial third building to go? How much would renovation cost, and was it worth it? Or would he just sell the building? The questions are now answered.