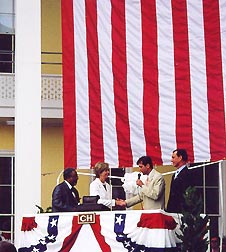 Hundreds of people line the lawn, stroll through the ballroom and dally on the verandah. I’m among them and overhear snips of conversations.

“They’ve done a wonderful job here,” murmurs a husband to his wife.

“Didn’t think we see the day,” comments one bystander as another leans towards me asking, with a twinkle in his eye, if he himself doesn’t throw one hell of a party.

I laugh.  It’s not his party of course, but who wouldn’t want to take credit for such a bash? 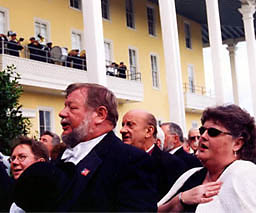 Cape May City Mayor Jerome Inderwies attends as do several council members, and the American flag flies high and large, as well it should at this summer house of presidents named for its first owner, Congressman Thomas Hughes.

Principal partner/owner Curtis Bashaw stands on the podium with Whitman, LoBiondo and Davis. After brief comments from all parties, Whitman cuts the ribbon as white doves are let lose to fly over the crowd gathered on the lawns.

The ribbon cutting is followed by a lavish Open House, everyone in town is invited to see what has been done with Congress Hall. Everyone is impressed, delighted, and relieved. 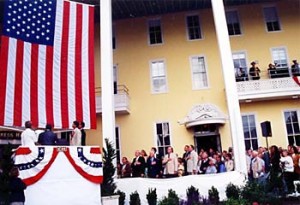 The entire weekend is planned to celebrate the opening. Special guests have been invited to stay overnight in the rooms — guest quarters not used for more than two decades. A weekend schedule of events includes complimentary breakfast on the verandah, cocktail receptions throughout the hotel, a Gala dinner in the Ballroom followed by dancing and an after party in the downstairs tavern.

“What else can it be but grand?” commented a guest of Congress Hall in the year of 1854, “At night, when the hall is cleared of its tables and chairs, and hundreds of gas jets are brilliantly burning and flickering, and the gay and elite are flushed with the giddy dance, then you behold a hall-scene, beautiful and fair.” 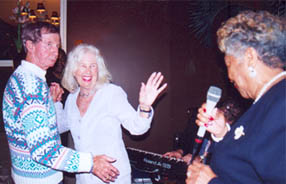 And so she is too in this year of 2002, the weekend of June 7 and 8 — beautiful and fair with the gay and elite flushed with joy. I can feel her pride, and perhaps a bit of smugness, as if saying this is who I am and should be, a fashionable high-class lady, one who demands and deserves admiration. A one-of-a-kind.

Admiral and Congress Hall. His grandfather, the Reverend Carl McIntyre operated both as bible conferences. Bashaw well remembers running through the halls of both hotels and days of youth spent on Cape May beaches.

When, in 1996, the Christian Admiral had to be demolished, I was allowed three days inside to document through photographs what was left of the old hotel and what would never be again.I remember standing in the dining room with Bashaw as he reminisced about his childhood days.

“This is where we ate dinner with Grandmother,” he said nostalgically, pointing to an empty corner of the room. Then he asked me to take his photograph in that spot where he dined so many times with his family. It was a poignant moment.

During demolition, the famed glass dome of the hotel was painstakingly removed and stored. It is to be installed in Congress Hall’s planned conference center.

Though Congress Hall is not Bashaw’s only historic preservation project — in Brigham City , Utah, he is renovating a “new-urbanist” residential community of moderately-priced townhouses and apartments and in New York City, Bashaw is 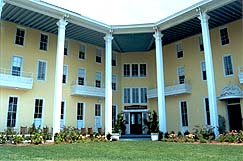 restoring a residential apartment retail building and hotel in Manhattan , it may be the project closest to his heart.

Initially considering renovation, Bashaw had many options, the obvious financing it himself and with partners through typical financial institutions. There was also rumor of major hotel chain interest. Bashaw chose to finance the $22 million project through the Department of the Interior National Park Service, as well as the New Jersey State Historic Preservation Office and the City of Cape May hoping to retain the building’s historical integrity as well as satisfy the city’s National Historic Landmark status. 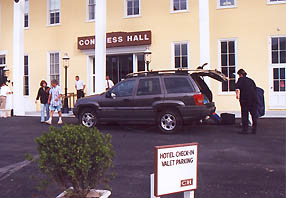 Guidelines were many and stringent, but the end result was well worth the aggravation. Says Bashaw, “The architectural vernacular was set. Our job was to grasp it, respect it, and preserve it.” Bashaw’s sister Colleen Bohuny is the interior designer credited with “respecting the serenity of the nineteenth-century building while infusing a vibrant atmosphere of modern-day comfort for the twenty-first century guest.”

Bashaw says Congress Hall is a building of “clean lines and simple elegance” and his goal was to “let it breathe again.”

“The building blends history, local materials and craftsmanship, luxurious color, and simplicity: the old and the new coming together to create a fresh interpretation of a classic seaside hotel in America’s oldest seashore resort town.” 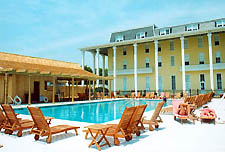 So Congress Hall is back among the living, her history vibrant — originally built in 1816, summer home to various presidents, once a speakeasy, the dwelling of the famous like John Philip Sousa — and her future bright. It’s funny how an old hotel — even without the wishing well — can tug at your heart, bring tears to your eyes, and make you just feel good.

But Congress Hall is not your average hotel. And, of course, Cape May is no ordinary town. 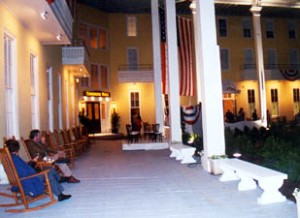 Freshly-painted its traditional pale yellow, the exterior replicates the hotel’s original design with sweeping verandahs, a sprawling back lawn with an in-ground swimming pool all facing the Atlantic Ocean. The hand-carved roof slates, window casings and balcony gingerbread — a Cape May tradition — have all been painstakingly restored. 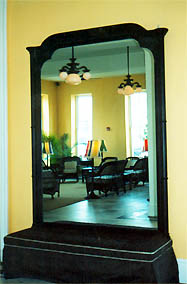 Sitting on the side porch just the other day, I was pleased to see local residents as well as summer visitors strolling around the property, sensing the renewed vibrancy of the hotel, simply happy Congress Hall was once part of the community. Later that evening, over a glass of wine on the beach side verandah, a full golden moon shone through the white columns of the hotel over the ocean, a symbol to me that the renovation of Congress Hall has not gone unnoticed.

The hotel’s lobby maintains the original 12-foot tall doors, the black and white marble floor and the black wicker furniture. Bashaw calls the lobby, “refined yet relaxed and luxurious yet approachable, forecasting the gracious ease that permeates the hotel.”

Connecting the lobby with the ballroom is the lounge which Bashaw says is the “true hub” of the hotel calling it “warm and luxurious, yet fresh and fun.” Antique oil paintings line the walls and upholstered Hamilton furniture offer comfort and relaxation. The chocolate-colored lacquered walls with a large fireplace surround a table given to the hotel by the United States Congress and a fully-stocked marble and 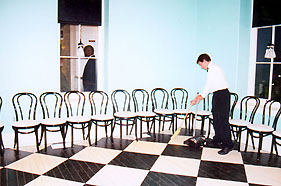 ebony bar. Somewhat out of character, however, is the zebra-striped rug which makes me feel as if there was a safari somewhere I missed.

The floor of the ballroom, officially named the Whitman Ballroom for Christine, is another case entirely. Breathtakingly restored — each original piece of wood removed, weathered, replaced and painted into a checkerboard of large black and white squares — is a sight to behold nestling underneath Tiffany-blue walls.

Lit by its original chandeliers, the room is fully-wired for sound, data and with moveable walls, the room can be used for any event including conferences, weddings, charity balls, concerts, film and theater.

Underground is the Boiler Room, a bricked nightclub, drinks flowing and dance abounding. I must admit, I “endured” two evenings here hesitant to leave. Being underground offers an escape from r 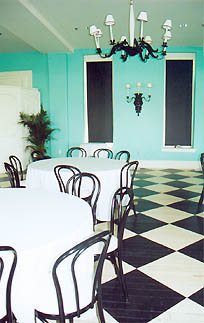 eality, or the “above-world” and also buffers the loud noise from the hotel which neighbors have objected to in the past. Loving this kind of escape, I may happily be found here on more than one occasion.

Congress Hall’s new restaurant, the Blue Pig Tavern, has two distinct dining rooms as well as outdoor seating. The first offers an airy, garden feel with a massive skylight. The second, adjacent to the first, is more a cozy tavern setting with dark green paneled walls, a large fireplace and natural wood floors. The menu offers nostalgic, simple, fresh American fare with classics like a half-roasted chicken with mashed 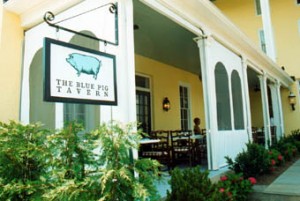 Nostalgic items like macaroni and cheese with stewed tomatoes, the “wedge” — iceberg lettuce with pickled onion and blue cheese dressing — and oysters Rockefeller work well with the building’s ambiance. Though sampling the food at the gala as well as one meal at the Blue Pig Tavern does not give enough to critique, I will say I have high hopes for the restaurant and plan to write a feature article on the restaurant and the chefs very soon.

The hotel’s corridors offer 16 retail shops including the hotel’s Museum Shop where one can purchase items from the Blue Pig Tavern. Other shops include a florist, jeweler, antique dealer, children’s clothing and a full-service spa.

I was fortunate to spend the night in one of the hotel’s guest rooms during the Gala and must say I have never slept in a more comfortable bed. I wanted to take 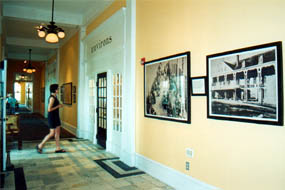 it home with me. Most rooms offer ocean views, mine did not, but I did have a nice view of a freshly-painted yellow brick chimney. But with pale blue walls, hand-painted custom headboards, cream-colored furniture and such a comfortable bed, I was not about to complain. The bathrooms — though somewhat limited on hot water — feature original porcelain tiles, with some offering original porcelain towel bars and 1920s bathtubs. Modern features include brand-new televisions with game and movie options, daily newspaper, DVD/CD player and alarm clock, two telephones and voice mail and dataport. The hotel offers four different types of rooms: premium, deluxe, luxurious suites and rooms which connect, ideal for families.