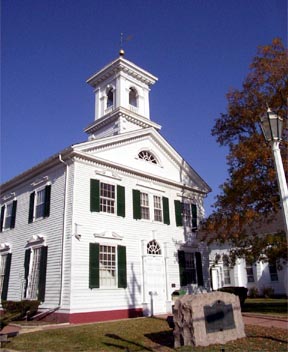 New to the Jersey Shore, Terri and Ted came to Cape May to test a dream of owning and running a retail store. They go to the bank to open an account. The bank manager tells them they must secure a certain document from the court before they can open a commercial account. The couple asks the banker where the courthouse is. “Cape May Court House,” he says.

Too embarrassed to ask passers-by, Terri and Ted spend the rest of the afternoon walking up and down Washington Street in Cape May  looking for the courthouse.  They find City Hall and the police station with no problem, but the courthouse eludes them. Finally, they determine that the banker must mean the Magistrate’s court in the basement of City Hall. They go inside and ask the City Clerk where they can pick up the needed document. “Oh, you have to go Cape May Court House for that,” she replies. “We can’t do that here.”

Not the first time those unfamiliar with the area have made that mistake. A recently published book, Cape May Court House -A Death In The Night, by best-selling author Lawrence Schiller was touted on a  network Morning Show where the hostess made the very same gaff as the couple, only to be corrected by the author. The book and the subsequent media attention its publication is commanding has put the tiny town of Cape May Court House in the spotlight, probably more so than the events which precipitated its writing.

A Brief History of Cape May Court House

In Colonial times, the village was called Romney Marsh. Later it became Middle Town, as it lies in the middle of Cape May County. By the early part of the 19th century, the county seat became known as Cape May Court House. According to an article written back in the 1940s by Edward M. Post, custodian of the Cape May County Historical Museum, the name started with Captain Mey, a Dutch explorer who landed at the southern tip of the state, hence the name Cape May. Cape May then became the name of the county and, according to a Post article, “when the courthouse was built, it followed the old southern custom and the site of the courthouse of Cape May County became known as Cape May Court House.”

So, that takes care of the name. But what about the town itself?  It was first settled over 300 years ago by Shamgar Hand in 1694. He was a whaler by trade in Sagg Harbor, Long Island, when he and his friend, Christopher Leaming, moved to Town Bank on the Delaware River bank just north of Cape May. Hand purchased 408 acres of land, situated on both sides of Crooked Creek from the West Jersey Society. He later bought 700 more acres, according to the Post article “comprising the present location of the town [of Cape May Court House] extending from Holmes’ run to the southern border of the high school grounds. The eastern boundary was the sounds and the western boundary was White Oak swamp.” 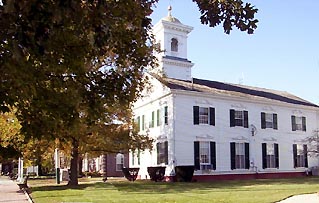 After the first survey in 1703 by Shamgar’s nephew, Jeremiah Hand, the property acquired the name “Romney Marsh” from the “fertile fields of Kent county, England, the homeland of the Hands.”

The first actual court house was originally the first Baptist Church in Cape May County.  It was built in 1715 and became the courthouse when the Baptists erected a new church in 1744.  A second court house was built in 1774 by master builder Daniel Hand, Jr. (Shamgar’s grandson) on an acre of land donated to the county by his father for use as a courthouse and jail.

Recollections of publisher, Alfred Cooper, who launched the Cape May County Gazette in 1880, appeared in the paper in March of 1929. Cooper recalled that in 1880 “there were no sidewalks here — merely paths by the side of the road. There was no building line on the main streets and houses were located where and as the owner’s whims dictated.” So far as the writer could recall, the only buildings then that lined Mechanic Street (more generally known as ‘the lane‘) were ten homes, a store, a house owned by Hannah Hand, a store owned by Mrs. Harry Stites, a barber shop, and a harness shop. “From this point to Main Street, on the north side, all the ground was occupied by William Ross’s lumber yard and store.”

Cooper refers to two major fires, one on the Centennial of the signing of the Declaration of Independence, July 4, 1876, which broke out in the Wheaton Hotel and another on Washington’s Birthday in 1905.

The publisher concludes that “until the building up of the seashore resorts brought into the county many people from other States, ninety-five percent of the population of Cape May County was ‘native born,’ and ‘class’ was almost unknown — 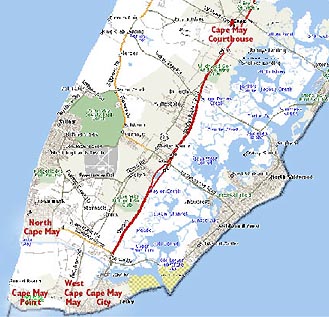 when deciding to have a surprise party no invitations were issued — a simple announcement of the party was made, and everybody in the community was welcome to attend. The same was true of the prevalent beach parties — the participants often numbered a hundred or more.”

Still an essentially quiet small town, but with no town government of its own (it’s part of Middle Township which has its own Mayor and Council), the outskirts of Cape May Court House today are peppered with commercial shopping centers. The remnants of the old “mechanics shops” from two centuries ago, echo in today’s Cape May Court House. As it was through the 18th and 19th centuries, the town is still the place to find what you can’t find elsewhere in Cape May County.

The current courthouse was built in 1927; the old courthouse and many Victorian and Colonial houses still line the main streets. And of course, they still hold court here — and this is where certain documents must be sought if an entrepreneur wants to get loans and start a business in far-away Cape May.