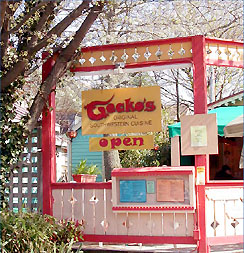 When Susi Bithell and her husband Randy, the former chef at Fresco’s on Bank Street, left Cape May for Santa Fe in search of a place to open a restaurant, they didn’t expect to be  back in Cape May.

But it’ is in Cape May that they opened the restaurant of Randy’s dreams -Gecko’s, where the menu is Southwestern cuisine, specifically patterned after dishes found in the Santa Fe area.

Susi, the pastry chef at Gecko’s is from Germany and grew up in the restaurant industry. Randy is from Salt Lake City, Utah and has always had a yen and a knack for whipping up such Mexican delights as Northern Mexican Vaquero Fajitas, a dish that originated as campfire food of the cowboys of northern Mexico.

The Fajitas are made with your choice of grilled chicken, grilled skirt steak, portabella mushroom ($15.50-$16.75) and there’s Chiles Rellenos Camarones ($18.50) made with roasted poblano chiles (imported from New Mexico) stuffed with grilled shrimp, jicama, pumpkinseeds and cheese baked and served with a roasted tomato cascabel sauce.  This is not the usual Mexican fare found in the Northeast and a far cry from Susi’s native German cuisine. “But I’ve come to love it,” she says.

The couple, who have two children, a boy who is 8 and a girl who is 5, haven’t found being 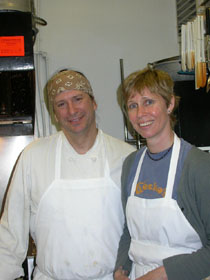 self-employed much different from working for someone else in terms of the work load and responsibility but Susi Bithell said they do find that owning their restaurant “has been a great achievement for us. We like how the restaurant turned out and the fact that our customers give us great comments.”

The favorite item on the menu for lunch as well as dinner are the Burritos. Two burrito styles are offered – a New Mexican Burrito stuffed with grilled chicken or beef and black beans, topped with red. green, or x-mas, sour cream and guacamole ($15.50-$16.75) or the Grilled Vegetable Burrito ($14.75) made with fire-roasted eggplant, squash, tomatoes and onions combined with mushrooms and spinach, topped with sour cream and peanut chipotle chile sauce ( imported from New Mexico).

A favorite dinner item is the Mesquite Grilled Salmon ($18.00) made with fresh papaya, mango, pineapple salsa.

Now in their fourth year of operation, Susi Bithell finds juggling restaurant operations and caring for children has, for the most part, worked out for the couple. Even though she is unable to be in the restaurant in the evening when dinner is served, as the pastry chef, she offers a number of tasty desserts to choose from including a Key Lime Taco- a cookie shell stuffed with a key lime filling – and an Avocado Cheese Cake.

It’s not desert hot in Cape May, but when you want a true taste of the Southwest, Gecko’s is ready for you.  As the menu says, “Come and get your chile fix!”