What do you do with your family on weekends?
Civil War re-enactors take their families– and the rest of us — back in time. 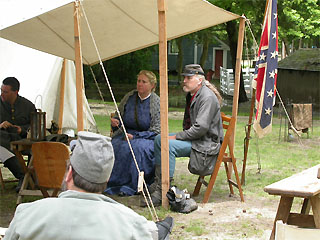 1st North Carolina Artillery.
When I went to see what it was all about, I expected to see grown men in uniform. I didn’t expect women and children gathered around campsites, dressed and acting the roles of Confederate families waiting alongside their husbands, fathers, and yes, grandfathers for their  marching orders.
Because I enter Cold Spring Village via Route 626, (locals know this as Seashore Road) instead of off Route 9, I don’t immediately see the campsites or the artillery canons. As I meander through the recreated 19th century village. I see plenty of soldiers strolling the soggy 22-acre site on this quiet Sunday afternoon. Two inches of rain fell the day before, putting a damper on Saturday’s activities, but the sun is shining now. 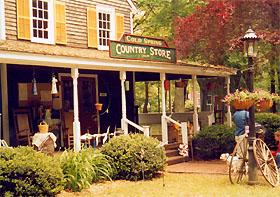 My first stop is to check-out the Country Store, circa 1790. It is the former Marmora Sharp House, moved to HCSV from Marmora, NJ, and inside, baskets hang over a brick fireplace. Bonnets are scattered about. Jellies and preserves line the shelves behind the counter. “Penny” candy is near the cash register. I can hear my footsteps on the wooden floor and I think, hmmm I’ve always wanted to can fruit and make my own preserves. I should buy a book and really do that, especially now that strawberry season is here. And while I’m at it, I think, looking over at the fireplace, wouldn’t it be great to at least know how to cook over the hearth? What if I find myself stuck someday in a wooden cabin with no electricity or running water?

Before I get too distracted, I better look for the soldiers. I spy a campsite up ahead, but am tempted to stop in and see the Dennisville Inn. This circa 1778 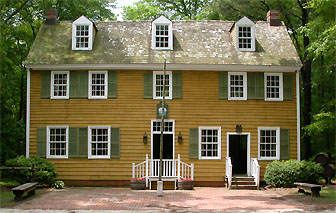 two-story building was the last stagecoach stop for folks traveling from Philadelphia on the way to Cape May. The current inn, which is celebrating its 225th birthday, features a restored tavern and dining room.
The gentleman in the room is very thorough and explains that the inn was a stop-over not a sleep-over and that lunch was provided in the dining room. Gentlemen could then retire to the tap room if they had business to discuss and while there, they could play a game of skittles. As I leave, I’m thinking hmmm…but I’d really like to hang out in the taproom with the men and discuss business and play skittles. I wouldn’t want to be left in the dining room where the ladies were encouraged to stay afterward to wait for the next 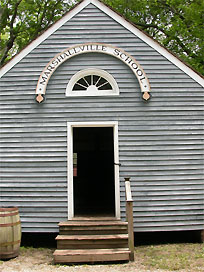 stagecoach to knit or chat or do whatever ladies do. Come to think of it, I’ve always wanted to learn how to knit. I should a get a book and learn how to do that. What if I end up stranded on a sheep farm and without knowing how to turn wool into yarn?

O.K. I’m really heading for the campsite now. I can see the smoke from the campfire up ahead. I’m sorry, I just can’t resist stopping in to see the Marshallville Schoolhouse. I’ll only be a minute. Circa 1825, the schoolhouse, my brochure tells me, is a good example of the use of local materials in the architecture of our region – our region being Cape May and Cumberland Counties. The gentleman in the schoolhouse is explaining how kids had inkwells in their desks and used quills to write with. As he talks, I remember that as a kid I had an “ink pen” which I used with an ink bottle, and ink blotter. I also remember that I was always spilling the bottle or dripping ink over the white linen table cloth where I wasn’t supposed to be using it. I think maybe I should go back to the ink pen. What a neat way to write to people, instead of e-mailing them.

Finally, I come up to the campsite. I’m struck by how neat it is. Tents and cots are clustered about and Claire Juechter is sitting with John Murphy and three-

year-old Mikey Snyder, who by the way is cleaning his rifle, just as a kid would during the Civil War. Claire, dressed in bonnet, petticoats and 1800’s attire has been participating in Civil War re-enactments for five years. “I was working at the Village when I got interested. I love history and I love theater. This is a great way to combine both,” she said. 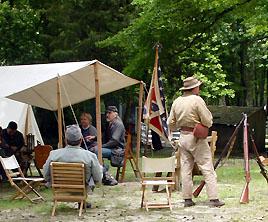 I want to chat more but I hear the canons going off and ask her where the artillery soldiers are. I scurry off past the topographers and engineers’ stand and find Battery A, 1st North Carolina Artillery already assembled. A man facing the onlookers explains that each of the five men has a separate function in preparing the canon to fire. Suddenly, one of the five is yelling “Fire.” And fire it does. The boom echoes throughout the trees disturbing the wet stillness of the 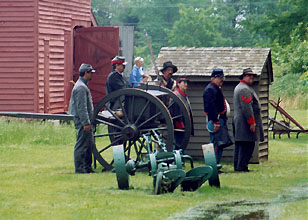 afternoon. Smoke billows over the soggy grounds. After firing a few rounds the artillery brigade walks off the field in perfect formation.

I meet up with Bud Sundstrom of Cape May, who tells me that he has been an artillery re-enactor for the past 5 or 6 years and that he looks forward to traveling to Gettysburg next month where 100 canons will be assembled and 20,000 re-enactors will be on hand July 4,5, and 6. He’ll be on 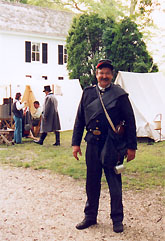 the Union side that day, a member of the Sixth Iron Brigade. He’ll also be a Union man when HCSV hosts its annual Civil War Weekend September 13 & 14. He tags himself a Civil War buff who took his interest one step further when a friend invited him to come along one weekend.
As I walk up the path to see the Topographers and Engineers, I spy wee Mikey Snyder walking down the path with his grandfather J.L. Snyder, who tells me Mikey’s father is back at the campsite, and I think what a great thing this living history business is – grandfather, father and son coming together for a trip not just back in time, but to a very specific era – 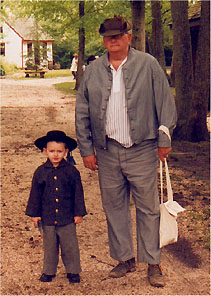 each person with a specific task or skill. In other words, they pretty much stay in character at the Village.
One character who looks a little off is Victoria Ervine ofVictoria is on the left speaking with Mikey Ocean City. I think, when I first see her, wow this is a very effeminate looking soldier – not that there’s anything wrong with that – and then he said something to me. and I thought wow,  this guy’s voice is – well there’s something off here. It’s not exactly Cold Spring Village’s “Victor/Victoria” but she then explained.
“Oh yeah. I went to the closet this morning and I looked at the Confederate soldier’s clothes and I thought, I can do this. I’m usually a Southern woman. Many times I do Susan B. Anthony at the Village. My 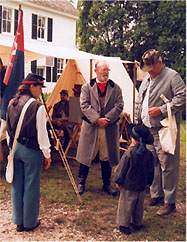 husband (Norman) is a soldier or he does the life of Allen Pinkerton ( who started the first detective agency in the U.S.). Being a Southern woman can be exhausting. You’re always on. I like this. I just sit back, and pretty much relax.”
Victoria’s been an historical re-enactor for ten years.  A friend who was teaching women’s’ studies in Chicago introduced her to the life of Susan B. Anthony and Victoria tried re-enacting. She’s been Betsy Ross too; but today she is a soldier.
In addition to Confederate and Civil War weekends, the Ervines’ bring their act to schools as well. Victoria really decided to stretch trek into history during last September’s Civil War Weekend when she and a few other members of the group turned the Dennisville Inn into “Victoria’s Palace.”  Victoria turned herself into – well – a lady of the evening.”The Provost Marshall arrested me during the antislavery rally and put me in jail” she said. 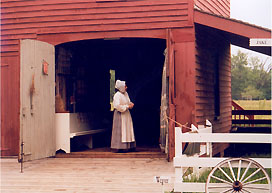 I bid the soldiers a fond farewell and make my way ’round the other HCSV houses.
At the Lewis Corson Gandy Barn (c1880) a lady shows me how to make rag rugs. At the Heislerville House (c1850) a man explains the art of tinsmithing. This place is filled people who understand the skills of the past, one specialty at a time.
I am reminded of Ray Bradbury’s novel Fahrenheit 451 about a society which bans books and the reading of them. Rebels in the society run away to a wooded land where each member chooses a book, reads it, memorizes it, then destroys 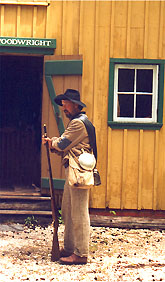 it. They spend their days reading the books to each other.
They become a living book just as the people at Historic Cold Spring Village become a living museum of history and they way life was in the 19th century.

So what are you doing this weekend? Why not expose your family to the past? Me? I’m going over to the Philip Hand House (c. 1824) to see how they spin wool from the Village sheep. ‘Cause you never know…

If you go..
Historic Cold Spring Village is located at 720 Route 9 Cape May, NJ, just a 5 minute drive off the island of Cape May.
There are entrances to the Village. One is off of Rt. 9 and the other is off Seashore Rd.
The Cape May Seashore Lines Train also makes stops at the Village.
Please visit the following web site for more information
Historic Cold Spring Village web site www.hcsv.org