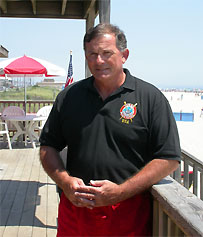 Well, that man is Harry “Buzz” Mogck (pronounced Moke). He’s a local boy whose family came to Cape May in the early 20s. His father and grandfather were boat builders who owned and operated Cape May Boat Works. Mogck became a lifeguard in 1967 after a stint in the Army. He couldn’t figure out what to do with his life so he decided to try life guarding for a summer. He has been at the helm of the Cape May Beach Patrol (CMBP) for 25 years moving up the ranks from part-timer to Lieutenant and finally Captain. 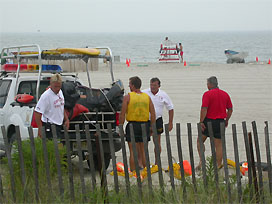 Not that anyone would have to tell you he’s the Captain. Just walk into CMBP headquarters on Beach Avenue and Grant Street. As soon as Mogck walks into the room, respect for the man bounces off the walls from the other lifeguards. He is referred to, of course, as simply “Captain.”

It was toward the end of the day the first time we chatted and it had been a particularly rough one with several rescues.

“The ambulance just took a guy a way a couple of minutes ago,” said Captain Mogck. “The way the beaches are this summer the currents are rough and guys get out there and act crazy and end up hurting their backs.”

As I look about the Captain’s office, which is up a winding wooden stairway above CMBP’s headquarters, there are plaques of achievement everywhere, but the one that most fascinates me is for the “East Coast Challenge” in 1989. In the middle of the interview about the USLA Championships, I can’t help blurting out; “You rowed from Cape May to Florida?” He acknowledges this feat quietly and without bravado. 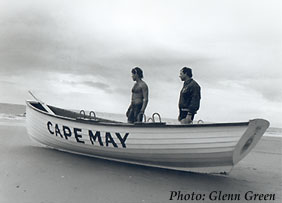 I, on the other hand, can’t let it go. “I row ten minutes in the gym and I think I’m all that. You rowed the ocean, the eastern seaboard, during hurricane season?”

He cracks a little smile and nods. I leave his office, but I can’t get this feat out of my head. I have to know more, because to know how a man (two men actually, lifeguard Richard Demers, 21 at the time, was his partner in the venture) rows 1,400 miles overcoming obstacles of nature, of the body, and of the spirit, is, I think, to know the mettle of a man. Mogck was kind enough to lend me clippings of “The East Coast Challenge.” 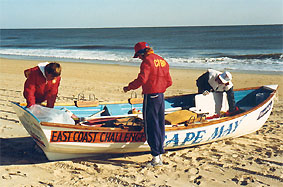 They took on the challenge for two reasons. One, to see if they could do it. Rowers had tried the feat before but they were traveling from Florida northbound in the spring when the waters and the weather are milder. Also, while one of the rowers was 21, Mogck was then 46.  Secondly, the duo wanted to use the event to raise money for The United Way Foundation.

Mogck and Demers shoved off at 8 a.m. on October 4 in a 16-foot surf boat, or lifeboat – the kind used during beach rescues. Rowing 8 to 10 hours a day, the two men camped out most nights, occasionally staying with friends along the way. 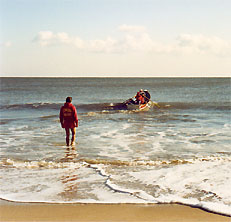 They had their share of “challenges.” They crossed the Delaware River and Chesapeake Bay in the fog without their ship-to-shore radio. In Kilkenny, N.C., their boat came up missing for about three hours until police found it off in a nearby marsh. Bad weather, high tides and dangerous currents greeted them in the Outer Banks forcing the two men to land at Kill Devil Hills, N.C. for several days until conditions became more tolerable.

Money problems plagued them. Donations were few and slow in coming. What if one of them wouldn’t have been able to finish? They had that covered with a 2-man back-up crew following them, as best they could, along the highway. But finish they did. Mogck and Demers rowed into Jupiter, Florida November 29th at 3:15 p.m. 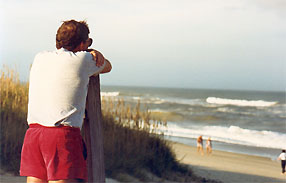 It takes great determination to see a thing through to its end. The same kind of determination it took to bring CMBP to the modern age. Mogck said when he took over as captain 25 years ago, the average lifeguard knew only the bare fundamentals of CPR. Now every lifeguard is certified. All the lieutenants are EMTs. Under Mogck’s leadership, CMBP has a Junior Lifesaving Program to “teach kids about water and safety skills.”

Are rumors true that he’s thinking about retiring? 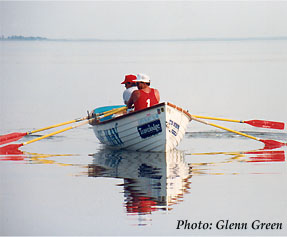 “Who told you that?” he asked indignantly. “I’m not retiring. I’m fit and I’m healthy. As long as I can do something each year to improve the beach patrol, I want to stay on.”

It would appear, then, that Captain Buzz Mogck will be around for a long, long time.