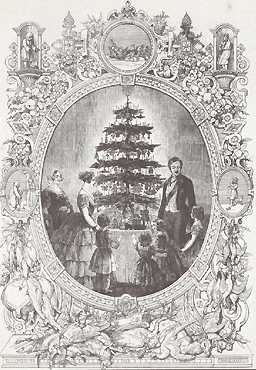 Most may not realize we owe many of our Christmas traditions to the Victorians, more specifically Prince Albert and Queen Victoria. When Queen Victoria married her German prince in 1840, he brought a new vitality to the German customs practiced by the English royals for the last half century, the most popular of which the Christmas tree – a rather scrawny looking thing which sat on top of a table in the parlor or sitting room.

The popularity of the Christmas tree is thought to date to 1848 when “The London Times” featured a full-page illustration of one of Albert’s trees at Windsor Castle. The custom took hold immediately as most everything the popular young royal couple did. And, adding to the mystique, Prince Albert was said to have donated decorated trees to schools and army barracks. 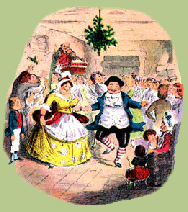 According Dane Wells, Cape May’s Victorian Christmas “guru” and co-owner of The Queen Victoria Bed and Breakfast, England was ready to embrace a joyful Christmas after having suffered through the anti-Christmas sentiment which came in the wake of the Protestant Reformation. Many scholars also gave the publication of Charles Dickens’ A Christmas Carol as much credit for bringing a joyful
spirit back to the holidays.

These forces combined with the Industrial Revolution that gave rise to a middle class looking to spend their money on anything which would highlight their new-found wealth.

However, early Victorian Christmas trees were simply decorated with nuts, fruits, buds, pretzels and decorated eggs, all of which, according to Wells, dated back to pagan fertility symbols celebrating the winter solstice. 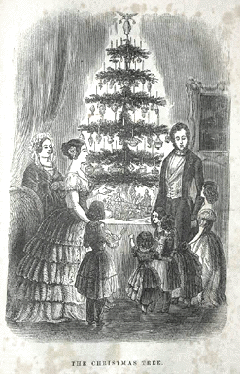 The Christmas tree tradition arrived in America around 1850 with the publication of Godey’s “Lady’s Book” which featured an engraving of the very same tree “The London Times” illustrated had two years earlier.

By 1901, buying a tree from a commercial vendor had become so popular the conservationist president Theodore Roosevelt refused to have a Christmas tree in the White House to protest the deforestation the craze caused. As a result, the first Christmas tree “farm” was started that year in Trenton, New Jersey.

We can give the nod to the Victorians for other traditions as well. Mistletoe, for example, started with the Victorians in the form of a glass ball called, appropriately enough, a kissing ball. They lined the ball with various greens, among them Mistletoe and hung them in the doorways. Anyone caught under the glass ball – well you know the rest.

Mistletoe goes even further back to earlier centuries when friends would be presented with a sprig of the evergreen (evergreens, any kind, were seen as a harbingers of good luck because, unlike other plants, they stayed green and did not die) as a wish for a prosperous new year, and the sprig offering was generally followed by a kiss on the cheek. 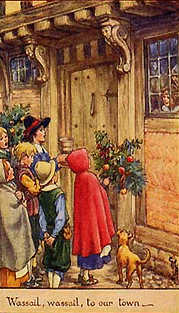 Wassailing or caroling actually began in medieval times, also as a pagan ritual, like decorating with evergreens. The wassail, a hot beverage usually made with hot ale or mulled cider, was a ritual honoring the apple and fruit orchards in the dead of winter. Farmers went from farm to farm pouring wassail on the roots of trees while making a lot of noise to scare off the bad spirits responsible for making the days shorter and colder. Eventually the custom of going door to door singing and drinking became a Christmas tradition.

Period magazines often offered gift-giving suggestions to their Victorian readers, anxious for something unique to give to their friends and loved ones.

As for fancy gift wrapping – that came much later in the century as store-bought gifts became more popular. Presents typically got the red ribbon treatment and were often hidden among the branches of the Christmas tree.

What did the Victorians buy? Here’s a sampling.

Gifts for the gentlemen included – Cigars, cigarette cases, scarves, mufflers, umbrellas, carriage robes, and we’re sure a nice port or bottle of sherry wouldn’t be turned down neatly filling – a silver vest flask. 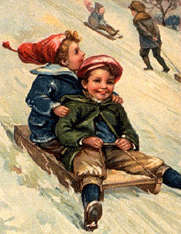 For the Victorian boy a nicely hand-crafted tool box would be received with glee, a sled, boxing gloves, stamps and stamp albums, a jackknife, books and, of course, marbles and whistles. A puppy was always appreciated as well as a Shetland pony for those with the means.

For the Victorian girl all the things listed for a lady would be appreciated save for the doilies and tea balls. For the Kraft-conscious, the gift of note paper with a monogram, and sachets made from dried flowers and herbs from the garden – specifically a lavender or lilac sachet which tended to hold their fragrance longer, or a small pine needle pillow. Books, canaries, and hair ribbons were also common gifts. And of course – dolls, doll houses, puppies, and the ever-popular Shetland pony.

Wondering by now what the Victorians did to celebrate the New Year? Well, it seems that during the 1870s the custom of young, eligible gentlemen calling on young, equally eligible young ladies came into vogue. New Year’s Eve celebrations did not occur until after World War I. The Victorians rang in the New Year with an elaborate open house which lasted from noon to 6 p.m. The gentlemen paid short calls at each household and left their calling cards. The young ladies, surrounded by family, of course, received the gentlemen and then offered them light refreshment. The custom became so popular that young ladies vied with each other as to the number of calling cards each had received. The custom quickly faded, however, some ten years later, when the young ladies’ families realized that more drinking than calling was being done. 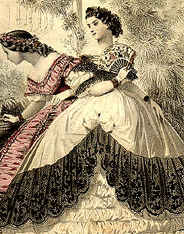 People still entertained on that day but their doors were open to family and close friends, not anxious young gentlemen callers.

So how hard is it to have a Victorian Christmas? It requires a gathering of greens, hanging of mistletoe, and the family tree trimming party, complete with ornaments selected or made by the whole family. And don’t forget the Shetland pony under the tree.

NOTE: A special thanks to Dane Wells of The Queen Victoria, as well as Elizabeth Bailey, curator at the Mid-Atlantic Center for the Arts for their research assistance in helping with the traditions of a Victorian Christmas.