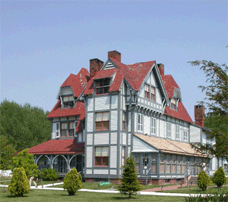 Today, ladies, the topic of discussion is “How to Create A Victorian Garden.”

Note I say ladies, because the gentlemen of the house have other duties like organizing hunting parties and, as every proper Victorian knows, it is the responsibility of the lady of the house to tend to the beauty of nature’s bounty.

I recently toured the Emlen Physick Estate’s newly restored front garden with the estate’s chief gardener, Hope Gaines. We talked about the Victorians and their ideas regarding gardening. Like all things Victorian, gardening comes with a definite set of rules.

An estate garden, according to Ms. Gaines, must be at least 150 feet wide and be 80 feet in distance from the road. But, If you think you might like to have your very own Victorian garden, as I do, fear not – the rules aren’t that oppressive and you don’t have to have a lawn the size of the Physick Estate. The only thing you really need is to be neat and well organized.

Oh dear. That could be a problem for me. I have always been more of a cottage gardener – meaning I am not neat, nor am I organized. I plant things willy-nilly. And that reminds me, I think the weeds I pulled last month are still lying there on the ground. This would never do in a proper Victorian garden.

Gardening is, after all, the one avenue of manual labor where it is acceptable for a lady to, dare I say, break a sweat. Of course, heavy work – like shoveling and digging must still be left to the servants.

Now, before we go any further, we must discuss the proper attire for a gardening lady. An old frock, one which does not restrict movement, is most advisable. Large brimmed hats and gloves are a must. Also, when the weather warms up, a bathing costume is perfectly acceptable –obviously this would be a costume where all vital parts are covered, otherwise, well – you might only imagine the talk and scandal. 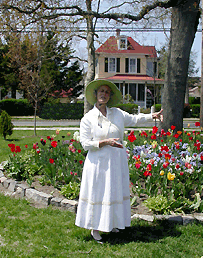 Rule Number One: “A good pattern” makes for a well tended garden, Ms. Gaines told me as we walked about. Although a bit windy, it is a beautifully sunny day. Ms Gaines is appropriately dressed in a garden tea party frock similar to one probably worn by Mrs. Frances Ralston, Dr. Physick’s widowed mother, and the person responsible for the front garden back in 1895.

An example of a good pattern, Ms. Gaines points out, is the arborvitae at the entrance of the front garden. The formal hedge-like trees have been planted in triangular patterns. Why arborvitae? Because, according to Restoring America’s Gardens, published in 1888, “no garden in city or country was considered quite complete without a protecting hedge, and the popular shrubs for this purpose were the cedar, arborvitae, wild orange, euonymus, box and cassine.” All of which are still as popular and plentiful in local nurseries today. 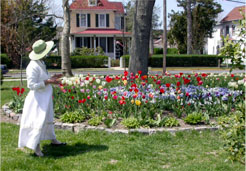 Rule Number Two: Pick a focal point by embellishing a structure, and making sure it is neat, well organized and harmonious. Nice as those arborvitae are, the eye keeps going back to the very large oval in the center of the garden.

The oval, or carpet bed as it is properly called at the Physick Estate, follows all of the rules. There are four concentric circles with a mature oak behind the carpet bed near the center. In the center caladium, followed by a circle of pansies. A circle of pink, red, and white tulips, many of which are heirloom plants, surrounds the pansies. The outer circle is comprised of hostas. That all changed, however, with the summer planting. Geraniums and Elephant Ear replaced the tulips and pansies. The original garden probably had begonias, but geraniums are a little tougher and more likely to flourish, according to Gaines. The pansies have been cut back to the ground, in the hope that they will come back when fall brings back cooler temperatures. 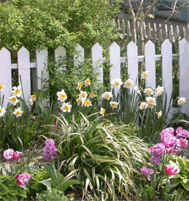 Rule Number Three: High privacy fences or hedges are taboo and considered “stupid, unchristian and un-neighborly, according to Frank J. Scott, a garden writer of the day. The Victorians wanted people to see their fine, pristine lawn, large trees (generally spruce, oak, beech evergreens, and maple) and front garden, giving passersby a “pleasing and uninterrupted view.” A picket or wrought iron fence, however, is acceptable, and in fact, recommended. (to keep out animals and boisterous children) Which brings us to another subject – paths. 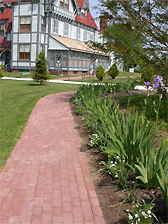 Rule Number Four: All paths must lead somewhere, preferably to the front entrance and to the back gardens. The Victorians did not approve of paths leading to nowhere (That is exactly what my garden paths do, by the way– they lead to nowhere and I end up trampling through the lawn, which is not at all pristine).

At the Physick Estate, for instance, the brick walk which leads visitors to the formal entrance to the Physick Estate, is filled with Iris, white and yellow tulips, narcissus and candytuft in springtime. Now that the hot weather has taken the blush of those blooms off, the tulips and narcissus will be cut back and the candytuft, which is an evergreen, will be left to takeover the pathway.

I don’t want to sound like a tour guide but before we leave the entrance area, there are two Yews standing opposite the tennis courts. In England these evergreens may be as old as 2,000 years. The two standing near the tennis courts are estimated at 100 to 150 years, which means they were planted around the time that the Physick Estate was built in 1879.

The Yew is considered sacred by various religions and, according Gaines’ research, certain yew objects such as drinking cups, are still regarded as having a certain spiritual potency. 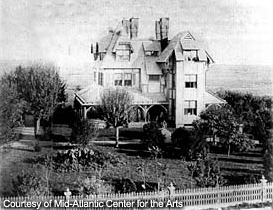 I don’t know about you (no pun intended), but I can’t get over how much thinking went into a Victorian garden. I’m more apt to walk into the local nursery and buy whatever I see, plant it, stand back and pray. I don’t know if Mrs. Ralston planted the Yews or not, but I can imagine her pouring over catalogs, looking out her bedroom window, and sketching her design plan, which is still in evidence 100-plus years later.

(Mental note to myself: Must do away with willy-nilly planting frenzies in the hopes my garden will still be around 100 years from now.) 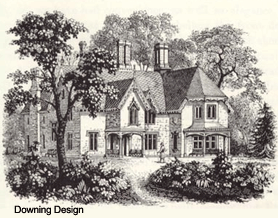 Now, you might be wondering why all the rules. Well, I’ll tell you. Another garden writer of the day – namely one Andrew Jackson Downing – felt we Americans were “bereft of tamed nature” and suffered from “that lowest species of idolatry. The love of money.” Gardening was thought to be a “morality lesson” which would root us and “cure the American’s drinking problem…” Well, you know ladies what they say about the best-laid plans….

I don’t know about morality lessons or curing America’s drinking problem; but I do know the Victorians have a good thing going with the carpet bed idea (see side bar)

Well, I think you have enough to get you started. And me? Sadly, the wind took my flour path willy-nilly and before I took proper notice, my oval turned into a zigzag. But you know what? It looks good anyway and that, ladies and gentlemen, is the real morality lesson – Mother Nature can make even the most inept gardener come off looking inspired because as John Keats once said;

A thing of beauty is a joy forever:
Its loveliness increases; it will never
Pass into nothingness.

Remember that large oval or circle filled with flowers planted in a circular pattern? The carpet bed remains one of the easiest and most eye-catching ways to accentuate a front lawn.

Since my visit to the Physick Estate, I am now infused with neat and well-organized thoughts on how to create your very own carpet bed, which I will share with you before they slip away and I regress.