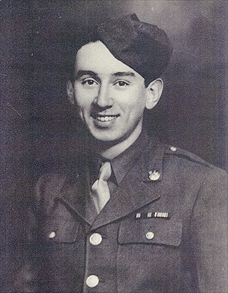 It isn’t easy coming up with a present for someone whose father is approaching his 80th birthday. But Mark Kulkowitz, proprietor of The Mad Batter Restaurant & The Carroll Villa on Jackson Street, found the perfect gift – a trip to France to commemorate the 60th anniversary of the Invasion of Normandy on June 6th.

His father, Harry Kulkowitz, started The Mad Batter Restaurant in 1978, the opening of which triggered Cape May’s restaurant revolution, participated in the Normandy Invasion and had not been back to those sites since the end of the war.

Father and son left for England about a week before the event. Mark organized the entire trip with the help of the French government which coordinated the event. Before they left, Harry received a handwritten invitation issued by the department of war. All the villages near Utah Beach, where Kulkowitz’s unit landed, participated in the event. 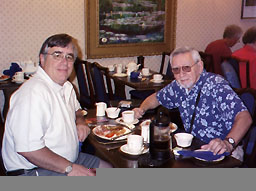 Harry Kulkowitz with his son Mark

So, why did he wait 60 years to return to this historic site? “My life has been wrapped up here,” said Kulkowitz, meaning in the United States, “It never occurred to me to go back. In those days, the government did so many things to help GIs forget the war. There were GI bills for your education, for housing, for a mortgage. It made it very easy to think about this life and forget about the other one.”

When the boats carrying the 60th-anniversary participants crossed the English Channel and landed on Utah Beach June 6th of this year, Kulkowitz was flabbergasted by the response. “I wasn’t aware of the impact we had on the people. The thing that came across very strongly was that we did something beyond what I thought it was.”

In 1944, when Kulkowitz landed on Utah Beach and approached the village of Houseville, he had only one thought in mind – to rid the world of Adolph Hitler. He felt it was his duty as an 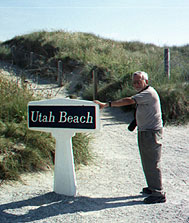 American and as a Jew to enlist. And enlist he did – at the age of 17, six months short of his 18th birthday.

Although Harry wanted to be in the photographer’s unit (he was already a studying under a professional photographer back in the States), he was instead assigned a job in the intelligence corps. He carried with him at all time a card which stated that he was never to be transferred into a unit where he might be captured.

As a radio operator, his unit went in ahead of the rest of the troops. He was assigned the task of trying to identify the location of German troops by listening to the enemy’s radio transmissions.

“Each radio transmitter,” he said, “has a fist” or a unique manner of signaling codes. His mission was to try and single out the particular radio transmission of the German operator and thereby identify his unit and the troop’s whereabouts.

Six months after the Normandy Invasion, Kulkowitz still found himself in France in The Ardennes. He and another radio operator picked up the signal of a German radio dispatcher. They told their sergeant that, according to their calculations, the Germans were right around the corner. “But the sergeant didn’t believe us and asked us to “get another beat.” There was no second beat. The Germans went off the air and six hours later The Battle of the Bulge started. Had that sergeant listened to us, I don’t know, I think we could have saved thousands of lives.” 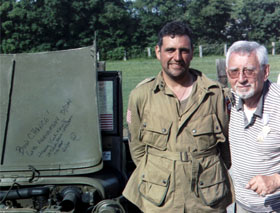 Later, Harry did get that transfer into the photographer’s unit. “I was so happy” he recalls, but he ended back in the radio operator’s chair when a few months later one of the units needed a replacement

Sixty years later, Kulkowitz was welcomed with opened arms in the small villages of France. The mayor of Houseville honored him with a special medal and accolades at a public ceremony. Women who remembered the invasion came up to him and kissed him. Women who weren’t even born in 1944 came up to him and kissed him. In one town a photographer waited for father and son to arrive. Mark and Harry got a little lost and arrived at the village three hours late. The photographer was still waiting for them and Harry’s picture appeared on the front page of the local paper the next day.

Commenting on the warm welcome Harry received, he said, “I just never thought of the other

aspects of the liberation. All I could think about was Adolph Hitler.”

What were his thoughts the morning of June 6, 1944? “For me, the most terrifying part of the war was the landing.” A freighter brought the troops in to meet the landing barge but the swell of the ocean was such that the barge and the freighter often collided and the soldiers who were climbing down the ropes onto the barge were sometimes crushed in the attempt.

“You had to time it just so,” said Harry, “but in the meantime, the Germans were shooting at you and the guy above you was yelling ‘get going, kid.’ For me, that was the scariest time of the whole war. Everything else was anti-climatic.”

What were his thoughts 60 years later? “To tell you the truth, I was very nervous. I don’t speak French.” No problem, the mayor of Houseville arranged for Mark and 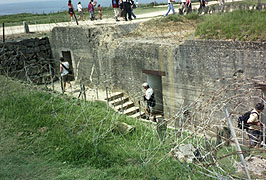 Harry to stay with an English couple who lived in the village. “They saved my life,” said Harry who was relieved to have someone who could translate for them.

As he sits on the veranda of The Mad Batter, he pulls over a scrapbook of pictures he took overseas during his enlistment. Also in the scrapbook are the newspaper clippings of his war years – one is in Hebrew – the other is the front page picture taken last month. “I just never expected such a reception. It had a profound effect on me.”

Always the consummate photographer, he took 38 rolls of film to begin filling a new scrapbook for new memories which his children and his children’s children can cherish for years to come.