Who are those horses riding through Cape May? We see them pulling wedding carriages, pulling tourists through the scenic areas of town, and waiting for passengers on Washington Street across from the Washington Commons shops.
But who are they? 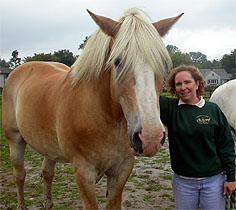 Duke is 18-years-old and has made Carriage Company his home for the past 14 years. A Belgian breed, he is in semi-retirement. His primary job is to train all the new drivers. Once the driver is trained and graduates to the field, Duke goes back out to pasture to enjoy the sun until the next newbie comes along.

Jenny & Judy are sisters. These two Paints are 15 and 16 respectively and were purchased when they were 2 and 3 years old so they have lived at the Carriage Company their whole working lives. Judy is a particular favorite for weddings. The sisters pull as a team or singly and don’t dare tell one she’s the pretty one ‘cause the other one gets a little huffy. 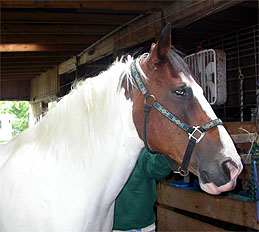 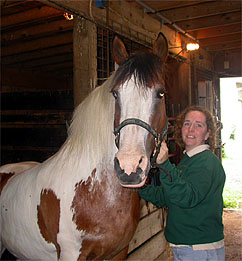 Simon is a 5-year-old Quarter Horse-Belgian cross breed. This naughty little horse ran under the chain blocking the barn door and tried to escape while our 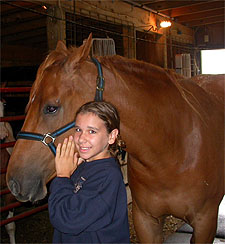 camera was poised. He was rescued from a hormone farm that collects the urine from the horse. When the horse has served his purpose, he is either rescued or sold for meat. It’s hard to look at the totally handsome Simon and think of what his fate could have been – but happy thoughts – because in his first year at Carriage Company he has learned how to drive and works the night shift. 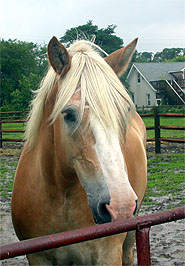 years. Although he is currently in semi-retirement along with Duke, he still pulls the wagonette in July and August and takes the rest of the year off. 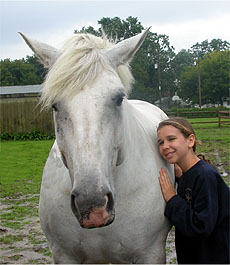 for 4 years. This filly works the day shift “because there is nothing in this world she is afraid of.”

Tucker is spending his first summer in Cape May. This 5-year-old was part of an 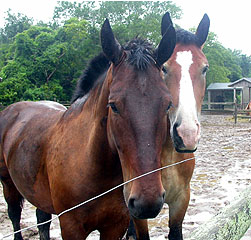 Amish plow team. The other team members, Jameson and Bishop (not pictured) joined Tucker this summer at Carriage Company. Tucker pulls the wagonette and only had to be in the training program for two weeks. “I think he said to himself, ‘I did not like plowing and this is so much better. I’m very happy.’ ” He particularly likes weddings.

Jameson and Bishop, however, are still in training after two months. Bishop, who was very shy about having his picture taken, is not quite as excited about his new job. Becky says this is because the Amish don’t treat their horses like pets and they are often not accustom to the social niceties that come with being a carriage ride horse. But he’s coming along.

Maxwell is a Belgian Draft horse who never grew to be as big as the Amish farmer who owned him thought he would. His loss is Cape May’s gain. He is 16 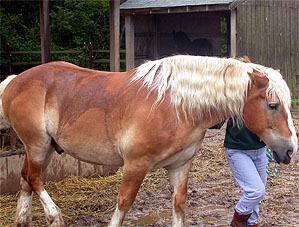 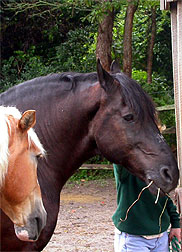 carriage company. He is 10 years old and has been pulling wagonettes in Cape May for two years. Because of his distinguished looks, he is a favorite for weddings.

Ulysses is the biggest horse in Cape May Carriage’s barn. He is a Black Percheron who stands 18 hands 2″ tall and weighs in at 2500 pounds. The 8-year-old 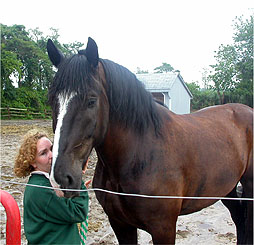 Ulysses has been a Cape May resident one-year. Previously, he pulled caissons as part of a Revolutionary War Reenactment. Can you figure out which side he was on? 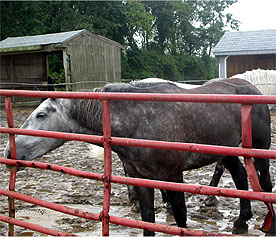 newcomer to Cape May. She came to Cape May three months ago from an Amish farm. She pulls the private carriage on the day shift.

Sterling is a Percheron Cross. He is 10-years-old and pulls the private carriage on the day shift, although he is flexible and will work at night if asked nicely. He 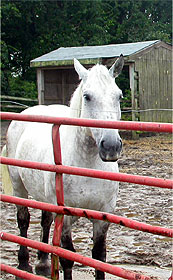 has a little quirk in his personality in that he is a “one driver type of horse.” So when his rider of choice – Monica Flad – is off two days a week, so is Sterling. Smart horse. And anyone else who tries to ride him? He bites and kicks and has a hissy fit until the driver gets off. 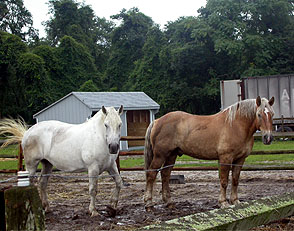 pulling carriages. She did pull carriages at one time for someone else but gave up her career to be a mother. She had four babies in five years and feels she’s done enough. Her main job at Cape May Carriage Company is to be Jackson’s sidekick. He loves her and she loves him. The end.
Jackson is 21-years-old and Becky’s mother, Gayle Donaghy’s personal horse. Gayle retired from Carriage Company three years ago but still comes in with Jackson one day a week to work the night shift. Jackson was in poor health a while back when he slipped on a manhole cover and went down on both knees. Gayle, who is a Reiki Master, worked with Jackson so he would not have to be put down. After a long rehabilitation, Jackson is now healthy and enjoying his semi-retirement.

Buck is the oldest horse in the barn. At 22 or maybe 23 years of age he has earned the title Senior Horse. He has been retired for two years. Because he worked so many years for Carriage Company, he has many devoted fans who 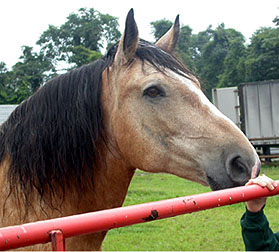 still request Buck so he is still on call for the occasional wedding. His story goes like this:
Buck was a logging horse down in West Virginia. When former Carriage Company owner Beverly Carr found him he was grossly underweight and very sick. Beverly  brought him back to health and, in response, Buck took to pulling carriages quite nicely. Because of his years of food deprivation though, Buck has a few issues. Every time he saw someone with food, he would steal it. The kid on the corner with the ice cream cone had to watch out because he or she might look up to see a hairy snout reaching down to steal the cone right out of the kid’s hand. Think you’d be safe in the car? Not with Buck out on the street. He’d reach right in and take that sandwich out of your hand. And Lord help you if Buck caught you wearing a straw hat. Off the head and into the tummy. Yum, yum yummy. Nor was anyone with food safe on the sidewalk. If Buck eyed food, he’d come after it. He even learned how to drink soda out of a soda can. His favorite treat? French bread. The folks at Carriage Company are planning a real retirement party for him in the fall. 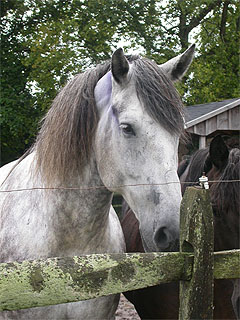 mother Patty. Prince is the second largest horse in the barn and the most commonly requested for weddings. He has a great personality and loves everyone except any male horse who comes between him and his mom.

Yes, he has mommy issues and still lives with her at home.

Patty, Prince’s mother, is a Black Percheron Mare, 12-years-old, and is the quiet level-headed horse in the barn. She works the night shift but is currently 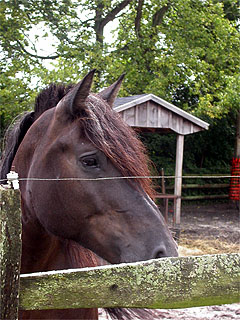 recovering from a pelvis injury sustained in July when a New Jersey Transit Bus struck her from behind on West Perry Street pulling her backwards. Becky hopes Patty will have recovered by next spring but her rehabilitation may take longer.

Prince has been right by her side the whole time.

Knight is an 11-year-old Clydesdale cross-breed. He’s been with the Carriage 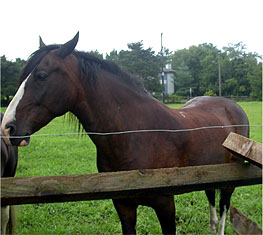 Company for 8 years. Knight is a true carriage horse and has a reputation for being an “endurance” horse. “He’s the energizer bunny of horses.”

Oreo is a 5-year-old Paso Fino breed. He is used only as a riding horse and is privately owned by former Cape May Carriage owner Beverly Carr. He stays on the property and his job is to “Meet and Greet” visitors and, of course, the other 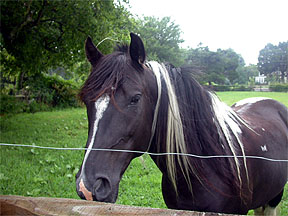 horses. He has been a resident for one year and knows perfectly well that he’s cutie-patutie.

You can have a mono y mono with most of the horses. The Cape May Carriage Company offers – weather permitting of course, half-hour tours on weekends during the spring and fall months, daily during the summer and during the Christmas season.

All carriage tours leave from the corner of Ocean Street and the Washington Street Mall and tickets can be purchased during regular hours of operation at this location only.

Sorry no phone reservations but you can contact The Cape May Carriage Company at their website at www.capemaycarriage.com