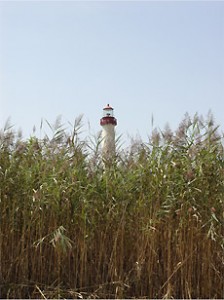 That is the question currently being posed by residents of Cape May Point as well as the New Jersey Environmental Federation, the City of Cape May, and the New Jersey Audubon Society (NJAS) as the U.S. Army Corps of Engineers moves forward with a plan to spray the glyphosate-based herbicide Rodeo on 57 acres of reeds or Phragmites at South Cape May Meadow in September 7. The Corps will then begin burning dead stalks during the winter and plant marsh vegetation determined to be beneficial to the area in the springtime. It is slated to be a two-year program. Another 43 acres would be sprayed in September 2005.

However, Jane Nogaki, the Pesticide Program Coordinator for the NJ Environmental Federation, disagrees with the Army Corps of Engineers’ approach to the invasive problem of phragmites.. The Environmental Federation is a non-profit citizen-based organization fighting to protect natural resources and clean up pollution in New Jersey. NJEF is the New Jersey chapter of Clean Water Action, a 30-year-old national organization based in Washington, DC. The group opposes the use of Rodeo or “glyphosates in wetland restoration projects such as Cape May Point because there are too many hazards associated with the pesticide.” 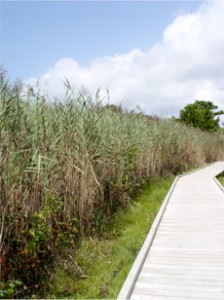 Additionally, the group feels the drift caused by a burn planned for winter could “pose risks of drift and fire hazards to the surrounding neighbors.” 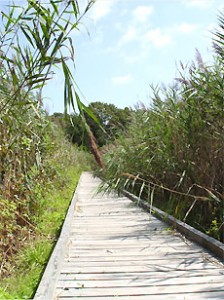 Finally, Nogaki points out that the use of pesticides and the burning of stalks has proved ineffective in the past in controlling Phragmites. Similar techniques were used on the Delaware Bay in Salem and Cumberland counties. The spraying of glyphosate-based herbicides has been used there since 1996 and the reeds still survive.

“There are two results of using pesticides,” said Nogaki in a recent telephone interview, “One is that the pesticide is so successful it wipes out all vegetation for two years. There are many birds and butterflies that feed in that area. Where do they go? Secondly, the project is only partially successful in which case they will be forced to repeat the process, 2,3,4,5 years, and the habitat will be pummeled with pesticides.”

Again, she cites the Delaware Bay in Salem and Cumberland counties. The restoration project there was planned for one year. It began in 1996 and is still on going and expected to continue until 2112. 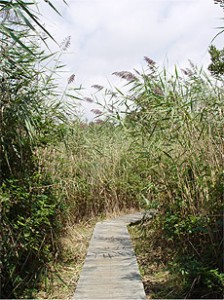 NJEF instead, recommends mowing, which they acknowledge may be more labor intensive but far more effective in that other plant life is allowed to grow.

Another government agency – the U.S. Department of Agriculture’s Wildlife Habitat Improvement Program, or WHIP, has provided one local resident with funding to explore alternative methods to the use of herbicides. According to an article that appeared in The Press of Atlantic City, August 21, WHIP provided Middle Township property owner Dr. Russell Down with a grant of $2,500 to mow seven acres of Phragmites for five years. Dr. Russell uses an old walk-behind mower with a single whirling blade powered by an 8-horsepower engine to keep his 49-acre Bayside property in check.

Dr. Down’s idea is that mowing the thick reeds allows other species a chance to root, thereby permitting a more natural diversity of plant life. Down started cutting the Phragmites down in 1999 and has been able to control three quarters of the seven acres. 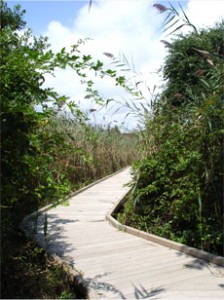 One thing all parties agreed on is the fact that Phragmites are invasive and if allowed to go unchecked will alter the biodiversity of the area. They create a “monoculture” in which no other plants can survive.

At a recent presentation by the Army Corps of Engineers held at West Cape May Borough Hall, the use of herbicides and the burning of stalks received the stamp of approval by the U.S. Fish and Wildlife Service as well as The Nature Conservancy, Cape May Point State Park, and the State Department of Environmental Protection.

A representative of the Nature Conservancy Jay Laubengeyer was quoted in an article that appeared in The Press of Atlantic City on August 17 in support of the Army Corps of Engineers’ project. Laubengeyer noted that the Conservancy, which owns the land trust, has taken over 10 years to analyze the project and concluded that “It’s either support the project or watch the biodiversity go downhill.”

NJAS’ Department of Conservation, however, seems to take another approach. Eric Stiles, vice president for conservation and stewardship for NJAS e-mailed CapeMay.com with a summary of the NJAS’s position on the proposed Phragmite treatment plan. It concludes: “This project could potentially create a significant amount of valuable habitat in an area that is critically important to wildlife. However, the proposed management strategies may negatively affect significant populations of wildlife, including endangered species and rare plants.

“NJAS believes that additional attention should be given to expected impacts on wildlife and human visitors, timing of the herbicide application and strategies for replanting and restoring the area after phragmites removal. Absent this additional information, New Jersey Audubon has serious reservations and concerns about the Phragmites removal project as planned.” 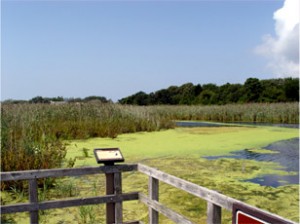 Local resident Barbara Skinner calls the Army Corps of Engineers’ project “asinine” and is anxiously trying to organize concerned citizens who are interested in learning more about the September 7 project. She can be contacted at 609-884-3951.

“The timing of this,” she said, “couldn’t be worse. They’re going to start spraying right after Labor Day and the burn is scheduled right before the fall migration. This could affect the migration of the monarch butterfly as well as fish” and other species which make the Lower Cape May Meadows their home.

On Aug. 3, Cape May City Council passed a resolution urging the Army Corps of Engineers to use mechanical means to remove the phragmites instead of spraying them. The resolution states that spraying “might pose a risk to humans and non-targeted species.”

The area in question is approximately 350 acres and contains Cape May Point State Park and the Cape May Migratory Bird Refuge. The first area to be targeted for spraying is near the concrete bunker in the park. The other area is further east near the Cove beach. An additional 27 acres will be sprayed using a truck. Approximately one acre will be hand-sprayed by workers.

Project Manager for the Army Corps of Engineers J. Bailey Smith said recently in a telephone interview that “spraying is not unsafe. The herbicides are absorbed more effectively” by the phragmites’ rhizomes or root system which moves horizontally and spreads quickly. The plan is to dispense the herbicides by helicopter with an aerial spray in September and use “hand application methods” in 2005.

“When we use the term aerial spray, it’s really not spraying. They’re droplets” as opposed to a spraying mist and will be dropped by the helicopters hovering only a few feet off the ground, for better control and concentration.

“The herbicide will be applied in such a manner,” said Smith, “as to not affect other natural vegetation.” Smith further attests that the herbicide has “no effect on living organisms” such as humans, butterflies and birds which are prone to make Cape May Point and the lower meadows their home or respite.

Nogaki disagrees and said NJEF is looking at “every avenue” available to them to stop the September 7th spraying.