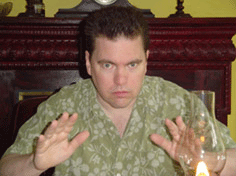 Well, it’s October, so you know what that means. That’s right. Look for ghosts.

I’ve been looking for ghosts for three years running and have yet to see one, hear one, or feel one – let alone talk to one. Everyone else seems to see them and sometimes even photograph them. What’s wrong with me? I’m a nice person. Why don’t they show themselves to me?

So, here’s how I figure it. I’ll go to someone who has contact with the spirit world on a regular basis. What about a psychic? What about Exit Zero columnist Craig McManus who has helped me out before on my futile quests?

Like the gentleman he is, Craig opened up his psychic world and welcomed me to come aboard. We paid a visit to the Columbia House at 26 Ocean Street. The Columbia House, circa 1885, is a guesthouse and is currently owned by Laura and Jim Zeitler who took over ownership in June, 2003. 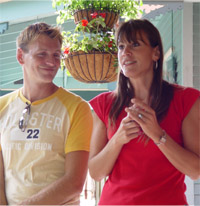 Both Laura and Jim are sensitive to the psychic vibes associated with old houses and passed up a couple of B&B deals because things didn’t feel quite right. Columbia House, however, has, as Craig confirmed a positive vibe even though there are a few ghosts watching over things or maybe it’s because they’re watching over things that the vibe is positive. But Laura is particularly skittish and holds her ears when Craig starts talking ghosts.

“I just don’t want to know about any bad experiences,” she says sitting on their wide, comfy porch. “But it’s ok if the channeling is about good things. Nothing negative.”

Craig, who is accompanied by his assistant Will, has invited Greater Cape May Historical Society historian Jim Campbell to join him and the Zeitlers (and yours truly along with our 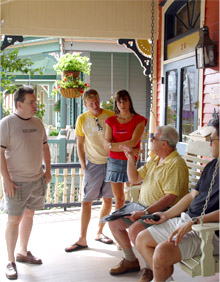 photographer Stephanie Madsen) to take a walk inside Columbia House and explore the “other world” for a few minutes.

So what we really have assembled here according to Craig are people from the “paranormal, the hysterical, and the historical.”

All bases covered as far as I’m concerned.

Actually, Craig had already done most of the ghost hunting earlier in the summer when he took a mini-holiday to Cape May – destination Columbia House.

But before we talk about ghosts, let’s talk history because you can’t understand the ghost without understanding the times they lived in.

Columbia House was named after the old Columbia House on Ocean Street built in 1850, which ran from Beach Avenue to Hughes Street, with a dining room accommodating 800 people. Columbia House was destroyed in ten minutes in the great fire of 1878 that also leveled 35 acres of land (including 7 hotels) situated in the heart of Cape May. No. No one was in the hotel at the time.

Jim Campbell says that Columbia House is actually the Essen House built by the Essen family. Wilhelm (William) and William Essen, father and son, respectively, were bakers in town. Their bakery was located at 524 Washington Street, where La Patisserie (a bakery) and A Ca Mia Restaurant are currently located.

Next to the bakery, the Essens had a confectionery and next to that an ice cream parlor.

Craig says he’d like to ask Jim Campbell a few questions to confirm the sensations he had during his previous visit.

A couple of things happened while Craig and his entourage stayed on the second floor suite at Columbia House – one of which was that the chair arbitrarily pulled out from the table and went back in as though someone were sitting down. 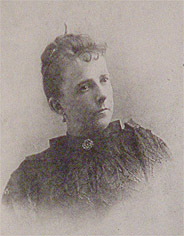 Another incident involved the basement and letters, or a name that came to Craig. “I see the letters t-r-i or tri something. Does that sound familiar?” he asked Laura at the time. She can still be heard screaming, running upstairs and holding her hands over her ears. Later, however, it was discovered that William, the younger had a wife by the name of Tryphene.

“When I stayed here,” said Craig, “I had the sense of a ghost, a man, and one with an attitude.” In fact, Craig told him that – “him” being the ghost. At that point the air conditioner malfunctioned never to work again. According to Craig, the temperature went up to 90 degrees, back down to 60, up to 70, down to 50 and then blip, nothing even though he told the ghostly man: “OK. You don’t have an attitude.” Too late. William must have said, “Hmm. Let ‘em sweat.”

“Also, I had the sense of someone in a wheelchair,” said Craig. 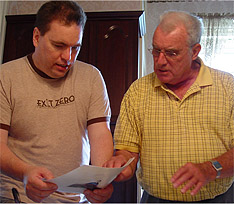 “Yes,” said Campbell, “the younger Essen did end up in a wheelchair. He had one leg cut off” apparently as a result of his diabetes.

I must interrupt our story to tell you this. I keep trying to write this story and five different times the story flashed off the screen onto an entirely different computer program. Each time I lost the story and had to start all over again. Then, out of the blue, the printer started printing the story with absolutely no direction from me. It was almost as though two forces were working against each other. One to kill the story and a second to save it. Now, you don’t think…Nah.

Just to be on the safe side, I e-mailed Craig and asked him what he thought. His reply? “Mr Essen seems to like to keep things about his life quiet. My camera batteries failed twice after being fully charged. Stephanie’s [our photographer] did the same I think. Perhaps he is watching over you or wants you to recheck something you’ve written!”

If you dare, let us return to our story.

Craig asked Jim if it was true that William Jr. had a little attitude problem. 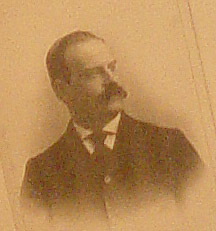 William was quite a wealthy man, but he used up all of the family fortune trying to find a cure for his diabetes. When he died, he left his widow Tryphene penniless. Because William’s father, according to Jim, died without a will in 1900, ownership of the Essen House was shared among William and his four sisters: Caroline, Edith, Bertinia and Della. When William died in 1938 the sisters let Tryphene live in the house and allowed her to collect the rents from the many rental properties the Essens’ owned thus ensuring her financial security.

We are sitting around the dining room table on the first floor of the Garden Suite. Jim pulls from his briefcase a chart of the Essen family tree. Because I have THE worst eyes in the western world, I take off my glasses and lean my nose right over the chart. I can’t say for sure but somebody had a lot of kids. Of course, there were four daughters. Jim also has family pictures of the Essens and an incredibly detailed knowledge of the family as well as the house – right down to who got what piece of furniture and where it is now and what happened to the family jewels.

Nah. Forget about it. I can’t tell you what he said because he swore us all to secrecy.

Laura and Jim are fascinated and soak up each piece of information as though they were nuggets of gold.

“One suggestion I have,” said Craig, “Is to hang a picture of William Essen upstairs to appease him. He’s obviously a strong personality and sometimes just talking about him and unearthing the Essens’ story, as we are today, helps.” 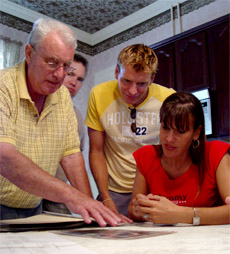 Laura reminds Craig that Mr. Essen was quite happy until :Mr. Paranormal Man” came along and stirred the pot. She said there have been a couple more incidents of electrical malfunctions. It would appear that the microwave ovens too have been misbehaving.

Electrical malfunctions are a particularly common occurrence in ghostly sightings as the ghosts, according to many experts, including Craig, feed on energy sources to exist.

We move from the Garden Suite over to the Parlor Suite, also on the first floor. The Parlor Suite is a combination of two parlors from the original Essen house. One of the parlors was used as the Death Room which may or may not have served as a dining room in the, shall we say, off season. 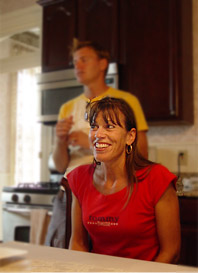 Laura informs us that the term “Living Room” came as a result of the Death Room being placed off the Parlor. Parlor then mutated into Living Room. Makes sense, don’t you think?

“Wouldn’t it be fabulous if he [William Essen] were laid out here?” You can only guess who asked this question. Yes. Paranormal Man.

“Don’t start that. And don’t say his name.” That would be Laura, aka, Hysterical Woman.

“I believe he did, yes. He and his father were both living at 26 Ocean Street at the time of their death. Both funerals were held here.” That would be Jim Campbell, aka, Historical Man.

That brings us to another question. How does Cape May rank in terms of hauntings? 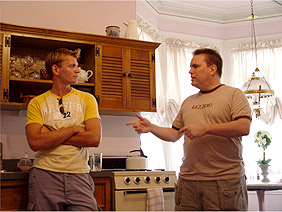 “Cape May is, in my opinion,” said Craig, “one of the most ‘concentrated’ areas for hauntings. Certainly Gettysburg and other Civil War battle grounds have more ghosts but, for a resort, Cape May certainly tops the chart on peaceful places that are haunted. I do believe the energy of the place has something to do with it and perhaps that is coupled by the fact that Cape May is surrounded by water. The water may just enhance the energy in some way.”

We are standing in the middle of the front parlor and Craig stops us:

“I just heard a roar of laughter. I think William’s pleased.”

What roar? I don’t hear a roar. I can’t tell if Laura hears a roar because she’s holding her hands over her ears and singing “lalalalalala” to herself.

Nothing ever happens to me. 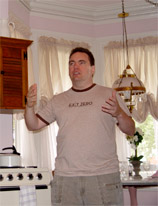 I have to go now because my computer is ………

EPILOGUE: Just so you don’t think I’m making this up. I received the following e-mail from Craig just as I was finishing this story.

“You think you have had problems with the Essen piece! My two hour tape of the event was completely BLANK when I tried to play it back to write the article! The batteries on my digital camera also went dead that day at the house, so I could not take pictures. I think Stephanie also had camera problems in the house. (Yes, she did.) I know the cassette recorder was recording because we stopped and started it and flipped the tape once. This has NEVER happened to me before. Obviously Mr. William G. Essen does not like to be recorded or photographed!”

Does a stay at the Columbia House intrigue you? Please visit www.thecolumbiahouse.com

Would you like to know more about Craig McManus? Please visit www.channelcraig.com