It’s the very merry month of May. And you know what that means… No, not Maypole dancing – Birding. Two of birding’s biggest events occur in the month of May here in Cape May. The World Series of Birding is May 14th and Cape May Spring Weekend is May 20-22.

The World Series of Birding is a 24-hour contest in which teams compete for the honor of being the team to spot the most species of birds in a single 24-hour period. Each team raises money that goes entirely to conservation – be it a high school conservation program, saving the Rain Forest, or preserving our nature trails.  Because there are various levels of competition from the corporately sponsored to youth teams, anyone can participate. West Cape May Elementary School, for example, already has 20-plus participants.

And the teams can pick from a variety of geographical perimeters. For example the overly zealous can try to cover the entire state of New Jersey or just concentrate on the areas south of the canal. They even have something for the incredibly stationary types called The Big Sit. Yes, you can just sit in one spot and see how many different kinds of birds come your way.

Next is Spring Weekend. “Birds know this (Cape May) is the place to be…” according to the brochure and the New Jersey Audubon Society invites you to come on down for the show of shows.

Did you know that Cape May has been a destination point for birds… and bird observers… for over two centuries? Well, we’re sure the birds have been in on the secret for longer but bird observers – among them John Audubon, who set out to paint and describe all the birds of North America – have found Cape May, West Cape May, and Cape May Point to be a migratory Mecca for our fine feathered friends.

But why? More than 400 species have been sited on the peninsula during the fall migration. Why do they pick Cape May as their stopping off point? 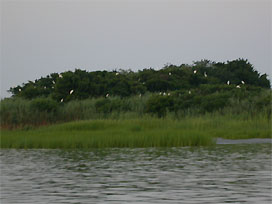 We posed this same question recently to Mark Garland, senior naturalist at the Cape May Bird Observatory on East Lake Drive in Cape May Point and as always, he was happy to answer the question.

Basically, he explained, those birds with “frequent flyer miles are tied to a certain habitat and right around Cape May, they can find a tremendous variety of habitats.”

In the spring, birds are looking for two things – a protected and diverse habitat for nesting. In the fall, they are also looking for food and shelter in a place that feels like home. The goal in the fall is to rest up and bulk up for the trip across the Delaware River.

“Think of Cape May,” said Mark, “as a Holiday Inn right on the main road.” Birds travel in a North-South line and Cape May is a good resting point on the journey. It represents the end of land in the fall and the beginning of land in the spring.

“You have 13-14 miles of open water you have to cross,” Mark continued, “You can’t stop like 5 miles into the trip because if you stop, you’ll die. So, you need to be well rested and well fed. Spring, however is the reverse. You need to rest after the journey and replenish.”

Preserving and expanding this “Holiday Inn for Birds” is vital for their survival as well as the survival of the plants, animals, and marine life that sustain the habitats found in Cape May, Cape May Point and West Cape May. 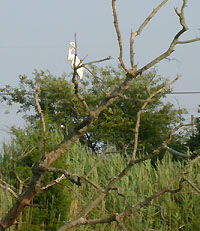 The next question though is “What are these habitats?”

Mark had no trouble rattling off the list. Salt Marshes. Swamp or Wet Woods (the difference between a marsh and a swamp is that the swamp equals water plus trees). Fresh Water Marshes and Ponds. Pine Forest. Salt Water. Grasslands and Open Fields.

Now the real question which I, as a non-birder feel compelled to ask – Who are these birds? Can you give me an example of a bird that only lives in these places and what does that bird look like?

No problemo, he said. Well, there is one problem – what do they look like? Telling me that the Cape May Warbler likes Pine trees is good but what does this little bitty Warbler look like? Thanks to the photography of Karl Lukens and with an assist from some other sources, we can put a picture to a name. Then, one day, when you or me find ourselves in a certain habitat and see a certain bird, we might have a pretty good chance of identifying that bird. Let’s just think of these examples as Birding 101.

We’ll begin with the very lovely and very tiny songbirds.

The Cape May Warbler can be found in the Pine Forests. Its only habitat is the pine forest. “If there is only one pine tree, like the one in my backyard,” said Mark, “the Pine Warbler will find it.”

It is a small, active, insect-eating songbird which is 4.75 inches in length. It has a thin, pointed bill with a bright yellow throat and breast. The male Cape May Warbler has more streaking across the breast and a pale mark on the side of the neck. 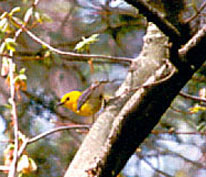 The Prothonotary Warbler’s habitat is fresh water swamps like the ones found at Rhea’s Farm off of Bayshore Road or at the back part of Higbees Beach, and the northern part of Cape May County.

Like its cousin, the Pine Warbler, the Prothonotary Warbler is also a small, (4.75 inches) active, insect-eating songbird with a thin, pointed bill. It has a brilliant yellow-orange head with blue-gray wings and tail. Mark said the name “Prothonotary” refers to the bright, yellow robes worn by the clerks in the Roman Catholic Church. The prothonotary winters in Central and South America. 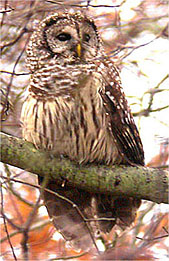 The Barred Owl can also be found in swamps, and wet woods. Mark says there are three pairs nesting currently on the island. They can be found at Hidden Valley Horse Ranch, Higbee Beach viewing towers, Pine Creek Marshes, Les Rhea’s farm, off Bayshore Road, and in the northern part of Cape May County. He says the Barred Owl is not a migrant bird but is an another example of a bird tied to a habitat – in other words it’s not going to be happy and therefore will not reproduce anywhere else. I’m sure we’ve all met people like that – I know I have.. 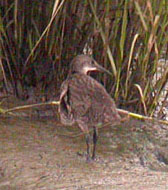 The Clapper Rail, aka, mud hen, inhabits the salt marshes which are so abundant on the shoreline of the bay. You can also find them in a little pocket of marsh behind the Marina on the west side of Cape Island Creek. The Clapper Rail is an example of a bird that is tied to that habitat and only that habitat and will not go anywhere but the salt marshes. It is a medium sized chicken-like bird. It stands 13-16 inches – with a wing span of 20 inches.  As you can see, not nearly as pretty and cute as the warblers but lovable just the same. 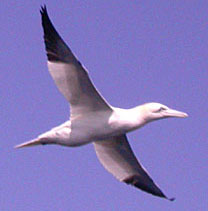 The Northern Gannet is tremendously cute – sort of like a seagull with a make-over. It is strictly a salt water bird. Mark says that if by accident it should wander out bayside, it will immediately turn around and head out to sea. These Pelagic birds are never found in any other habitat and only come ashore to breed. They average 31 inches with a wing span of 70 inches. The are amazing to watch over the water because they dive for fish from the air. Flocks engage in spectacular bouts of plunge-diving for fish, with hundreds of birds diving into the ocean from heights of up to 130 feet. So don’t be hanging out the back of a sightseeing boat with a fish in your hand.

The Eastern Meadowlark likes to sing its song in open fields like the ones found along Bayshore Road. Mark says they used to nest in the open fields along New England Road but new home construction over the last two years has stripped them of that habitat. Too bad birds can’t enforce their own eminent domain. They need to form a union because the Meadowlark is declining rapidly because of habitat loss. Anyway, they can still be found at Hidden Valley Horse Ranch, Higbee’s Beach, the northern part of Cape May County and the Cape May National Wildlife Refuge. The Eastern Meadowlark is not a Lark but rather a member of the family Icteridae, along with blackbirds and orioles. A male Meadowlark typically has two mates at a time, on rare occasions when he is feeling particularly frisky – three. And as you can tell my the picture – he is a shy guy when it comes to his photo being taken. 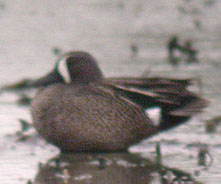 The Blue-Winged Teal frolics in fresh water marshes and ponds and can be found near the Nature Center on Delaware Avenue, South Cape May Meadows, Wildwood Crest and the Coast Guard Base, also at Delaware and Pennsylvania avenues. Its habitat is tied to the fresh water marshes and ponds. It is a small duck, 14-16 inches, with a wing span of around 2feet. The male’s call is a loud, high whistle or a nasal bleat. The female gives loud, evenly spaced quacks. These sounds are very similar to ones heard in my house around 6:30AM, not generating from the bird population, I might add

So there you go. I know this mini-birding 101 lesson helped me a lot because I can never see the birds even on the couple of occasions when I’ve gone looking for them so it’s good to at least know what you’re looking for. My thanks to Mark Garland and to the New Jersey Audubon Society and of course photographer Karl Lukens. Come to Cape May  – if not for the World Series of Birding – then for the Spring Weekend. “Congregate where the birds migrate” and you might get lucky.