I’ve been looking for ghosts every fall now for, I’d say about four years. I’ve taken walking tours, trolley tours. I’ve followed ghost writer Craig McManus around when he was looking for ghosts. I invited Craig to our offices last year in search of the ghosts I’ve heard about for so long. I even stayed in a “haunted “house one year and guess what? The only thing I got was a great night’s sleep and an even nicer breakfast the next morning with my friend and innkeeper Harriett Sosson of Poor Richard’s Inn. But not even a whisper of a ghost. I’m not saying, as former Cape May mayor and innkeeper Bruce Minnix maintains, that there are no ghosts in Cape May. I’m only saying, I haven’t found them or more to the point, they haven’t found me. 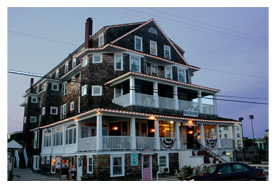 This year, I decided to take a walk-about for myself and see if I could spy any unearthly apparitions in my favorite haunts. It was a great night for it. Dark, windy and eerie. I didn’t know it but there were tornado warnings issued for the area. Perfect. I started at the Hotel Macomber, home to the original Haunted Cape May Tour run by ghost historian Diane Bixler and paranormal investigator Al Rauber. 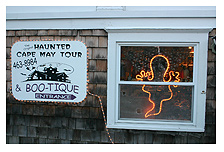 So legendary are its hauntings, that every ghost writer in town has written about and stayed at the Hotel Macomber, formerly the Stockton Villa, circa 1914 on Beach Avenue and Howard Street. The spooky activities begin in the lower level of the hotel where Diane’s Boo-Tique is located and include radios suddenly going on or abruptly shutting off or, and I love this one, turning the dial to Country Western music. Upstairs right off the lobby is the dining room at Union Park Restaurant which has also been the scene of many a sighting. There are tales of a woman walking through the dining room and kitchen “wearing a shabby waitress” uniform. Table cloths lifting up from the tables and the chef’s knives being moved from one spot to another. Patrons need not fear, however, because these spooky occurrences seem to only happen when the restaurant is closed and only the staff is on hand. But the most eerie story at the Macomber comes from Room #10. 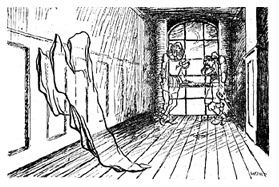 When I went on the walking tour, my tour guide Desiree told the story of an older woman whose children treated her to a stay at the Stockton Villa in the 1940s – the summer after her husband died. She came back summer after summer throughout the decade with her steamer trunk and always stayed in room 10 and, according to the experts, she’s still coming back. Heavy furniture or possibly a trunk can be heard moving across the room throughout the night whenever the lady is back in town, which according to Desiree, is about three or four times a summer. Psychic medium Craig McManus had extensive encounters with any number of spirits in Room 10 the night he stayed there. From the “trunk lady” to “Pinky” who told him all about the trunk lady because Pinky apparently has to wait on her every time she “checks in.”

I’ve never even been in Room #10 but I like the idea that someone who came here a long time ago still likes to come here. Wouldn’t you? And just looking up into the window of Room #10 from street – or for that matter – gazing at the Macomber in all her glory at twilight is enough for me to put her on my list of favorite haunts. 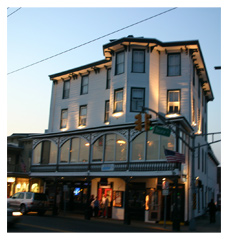 From here, I walk along Beach Avenue until I get to Cabanas and Martini Beach, which is upstairs. This is another classic haunt. And again, just look at the place. Of course there would be tales of odd events there and quite naturally they would come from the third and fourth floors when it was known as Denizot’s Ocean View House. The very first story I heard about the building is very sad and involves an Irish maid or prostitute, depending on who was telling the story, named Gloria (Cabanas has had many changes in ownership over the years and at one time was called Gloria’s) who worked at the hotel and kept her toddler close to her by putting a chair up as a barricade at the top of the third floor stairs. She, according to the story, hung herself from the third floor stairwell following the death of her daughter, who allegedly ran in front of a trolley car outside the hotel. 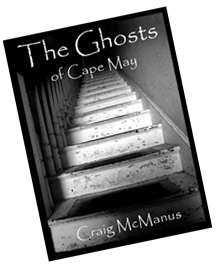 In his book The Ghosts of Cape May, Book One, Craig McManus tells a different story. He traced the origins of the first tale to a photograph someone took a few years back of the front window on the first floor. When the picture was developed there appeared to be a ghost of a young child standing in front of the window. Craig says he was approached by a ghost who called herself Julia and denied any hanging incident. According to Craig, she worked at the hotel as a domestic and traded her services for room and board. She did have a child out of wedlock, a boy, and she did try to keep him nearby by placing a chair in front of the door. He died at a young age but not because of a trolley accident. So, there you have it. A tale of two ghosts.

Here’s what I like about a lot of the tales. Whether they are accurate or not, they depict a time and scenarios which are very true to the period and take us back in time to a time of steamer trunks and Irish maids in white floor-length aprons. A time of when trolley tracks ran alongside railroad tracks and followed Beach Avenue all the way to South Cape May and Cape May Point. South Cape May is no more and can you imagine? Railroad tracks along a beach? What were they thinking? Clearly the term erosion and nor’easters were not in their vision. 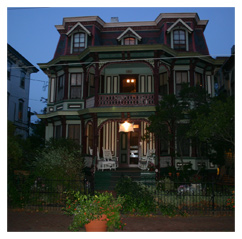 My favorite haunted street is of course, our oldest street Jackson. There are so many tales and legends and myths written about this street, we just don’t have enough time or space. I’m going to focus on my friend Harriett’s B&B because I have exciting updates for you.

Over the years, Harriett has heard ghostly shenanigans coming from various areas in the circa 1882 B&B. In what used to be the servant’s quarters, guests have reported seeing a “lady in her dressing gown” standing in front of a mirror brushing her hair. She is transparent, so the story goes, except for part of her face.

In Room #7, where I stayed one night in search of ghostly wanderings, three women friends shared the spacious room, which, at the time, had twin beds. The lady on the bed next to a curtained closet was reading a magazine when a sudden force of energy swept the magazine from her hand ad flung it into the closet. Said incident was witnessed by the other two friends.

In Room #3, which is on the first floor, more than one guest has reported pounding on the bed from underneath the box spring. 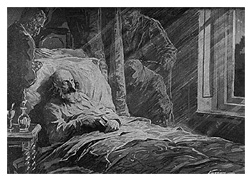 This summer, however, a new tale has emerged from Room #6 – where nary a ghost has ever appeared. As Harriett tells the tale, the guest checked into Room #6 with her six-year-old son whom she said has “paranormal powers.” Within minutes, the woman came out of the room with her son and asked if there were “spirits in the house?” Harriett said, “I never know how they want me to answer that, so I just said, ‘I don’t know, why do you ask?’” Her son, it seems, has “paranormal powers” and was hearing voices in the room. The next morning, mother and son reported that the bed was moving throughout the night. Harriett says this particular 4-poster bed has no box spring and is more of a platform bed. In other words, this isn’t the kind of bed that moves – easily.

It’s also a great house with some great history to go with it. It was built as the private residence for the owner of the Carroll Villa, just next door. It has been a B&B since 1977 and I strongly advise you do your own investigating here. What’s the worse that can happen? You’ll get a great night’s sleep and a great breakfast to send you on your way. 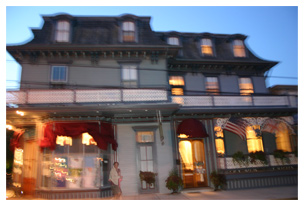 I think my next most favorite haunt has to be the old Ware’s Pharmacy, formerly Hairloom hair salon and B&B, presently home to Cheeks at the Beach and the Queen’s Hotel at the corner of Ocean Street and Columbia Avenue. It was also a law office at one time. Stories from here just abound. Apparently, Dr. Ware ran a pharmacy on the first floor (where Cheeks is). A gambling joint took up the second floor and a brothel occupied the third floor.

The very Victorian City of Cape May must have been akin to Sodom and Gomorra based on all the gambling and brothelling we hear about, especially scandalous considering the neighboring community of Cape may Point was established as a religious retreat. At any rate, it’s safe to say that a gentlemen looking for a bit of distraction would find it, especially on Columbia Avenue. Let’s not forget that the prestigious Mainstay Inn was also a gambling establishment.

According to the scuttlebutt, a lot of activity has been reported from Room #22 on the third floor or the Plum Room as it was once called under a previous owner. Most of the disturbance comes in the form of rocking. One of the ladies was assigned the task of look-out. If they saw the law coming, she would start rocking – the creaking of the chair on the floorboards would alert the gamblers down below.

When Dane and Joan Wells still owned the Queen’s, I spoke to them about the stories. He said several guests, prior to their ownership, reported a presence in the room, followed by the smell of woman’s perfume. He, himself, however did have one strange incident in which the guests were locked out of their room and he could never explain how it happened. 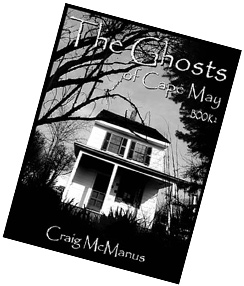 In his second book, appropriately titled The Ghosts of Cape May Book 2, Craig reports having stayed in the hotel, which is currently owned by Doug and Anna Marie McMain. He did not stay in Room #22 but nevertheless, was awakened in the middle of the night by the sound of knocking. When he opened his door all three times to see who was knocking there was only silence and an empty hallway. He later saw a vision of a tall woman walking through the corridor with a silver tray and beverages. He politely told her he was not thirsty and simply wanted to go to sleep and the knocking stopped.

I like that story. I like the fact that the ghosts of Cape May are always friendly and still looking to lend a helping hand whether we want them to or not. And if you don’t care to be bothered, all you have to say is, “No thank you.”

These are my favorite haunts and stories, but there are plenty more where they come from. Take a tour, read a book and find out more about our ghosts because a better understanding of our past often gives a hint to what our future might be. Besides, if nothing else, you really will learn a lot about how life used to be in the oldest seaside resort in the country.  Happy Halloween!