I remember a gnarled old beach plum in my mother-in-law’s back ally in Ocean City. That was a long time ago and the tree was taken out by new owners years later. This 95-year-old little lady told us of picking beach plums in 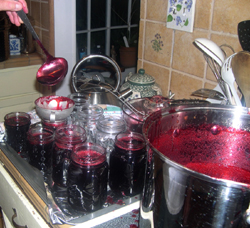 Ocean City when she was a child and later picking them as a young mother in Strathmore New Jersey she also told me of jars of jellies and jams she made with her grandmother and cousins.Years back this set the stage for my husband and I to plant some beach plum plants along the southwest side of our garden fence. Now we battle the birds for our share of this fruit to make lots of jars of tangy jam. Last year we gave out jars of it as favors at mom Kiefer’s September birthday party. We cooked the plums in a big pot and then stirred it through our colander that is in my big spaghetti pot. We worked on this fragrant project well into the night. The jewel-like jars were a hit and well worth the work, but the jelly was a just reward. We are already watching this year’s fruit and plan to cover it with nets.

We planted our beach plum, prunsis maritime, in sandy well-drained soil in full sun. They are mixed in with some Rosa rugosa, herbs, currents, black berries and raspberry all along our garden fence. T 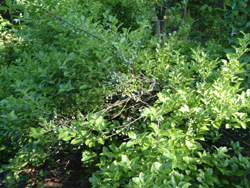 he only trouble we ever have is birds. Since we love birds and feed them year round we never complain about sharing our beach plums. In fact there is a blue bird family nestin in a box on one of the fence post that is nestled in this fence row of plants.

Although beach plums plants are often misshaped and more like a shrub than a tree they add some seashore charm to any well-drained garden. Nothing is prettier in early spring when they are covered with heaps of white blooms. They are quite a sight where they carpet the dunes in Delaware on the way to Ocean City, Maryland and other shore resorts in that area.

After the flowers fade and blow away in the breeze, leaves emerge and, along with small green berries, cover the plant. There is nothing unusual or showy about the plant at this stage. One day you notice that the green berries are a bit bigger than a large blue berry and they are beginning 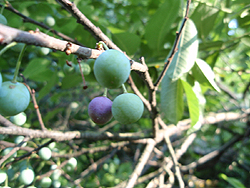 to have tinges of plum color. Soon you will notice birds darting into the bushes to snag a berry or two or three. Covering the shrubs with nets helps prevent this if you need lots of beach plums. For years we just shared with the birds, after all, how many jars of beach plum jam can we use and give for gifts? We bought nets this year.

The plants are rather small and often crooked and certainly not a big seller in our nursery. They are pretty in spring when in bloom, but after that hardly anyone ever notices or asks for a beach plum. Once a few people from Ohio stopped on their way to Cape May to buy a few plants for an Herb Society of America garden. Yes, beach plums are considered by some to be herbs.

I have friends in Cape May who told me that there is a beach plum association so I looked it up on the Internet and found that the Cape May County Beach Plum Association is located in Cape May Court House and can be reached by calling 609-412-3123 or visiting their website at www.cmcbeachplum.com.

People are very interested in native plants and this plant sure fits the bill.Prunus maritime, or beach plum was once found growing naturally in the sandy soils all along our coast as well as inland a bit. Since it thrives in environments with salt and drought it can grow where many other plants will not make it. It can be planted near dunes to help hold sand.

According to the Beach Plum Association website, the first recorded mention of the beach plum was by explorer Giovanni da Verrazano in 1524, who noted them growing in southern New York State. He called them “damson trees.” Later they say that Henry Hudson reported seeing an abundance of “blue plums” along the river named for him. 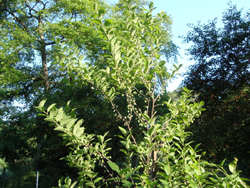 Even now beach plum is valuable in stabilization and restoration of coastal areas. It is well adapted to dry sites with moderately fertile, slightly acidic, loamy and sandy soils. In New England, many areas, even in Cape Cod, are trying to restore original beach plum dunes and planting more beach plum. I remember seeing it on dunes when visiting more than 30 years ago, but I read that now it is being protected and planted. People are actually growing it and using the fruits for jams and other products to sell to the tourist as they once did along our coasts more than 100 years ago. This native shrub is also very important in feeding coastal wildlife.

I think that plants like bayberry, blueberry, bearberry, raspberry, and other easy to grow shrubs that will tolerate and even thrive in shore conditions are the best to plant. They require little or no care once established. They attract and fed song birds and you will have a handful of fruit a day if you plant enough plants. So, go native now and plant some beach plums or other native fruits.