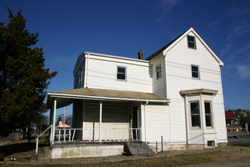 Most of the changes are on Lafayette Street or nearby and involve some neat, little known history. If you recall, Cape May City Council wanted rid of a house at the corner of Broad and Elmira streets in order to widen Elmira for two-way traffic. Problem though, it dates back to the 1860s and was deemed of historic significance. In April council decided to ke 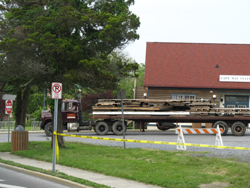 ep and not demolish the house, provided someone wanted to buy it. That someone stepped up to the plate. Shirley Phinney and Ron Long, owners of Elaine’s Victorian Inn on Lafayette Street, bought the house from the city for $100. City Council approved the sale and the last two weeks in May were spent moving the house. Phinney and Long brought in a team of experts (S.J. Hauck, Inc.) to move the house, which required taking it apart in five sections. Had the 19th century house been moved in one piece, the move would have resulted in a historic tree on the grounds of Elaine’s Dinner Theatre 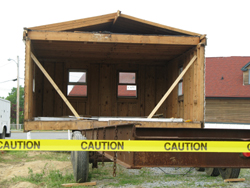 being torn down. “We moved it without tearing out any of our [historic] trees,” said Ron. “The movers had three inches to spare between the trees and the space where the house needed to be placed.”

Ron said they were able to move the house in such a way that it will be restored in its entirety. “We were able to preserve the original flooring and the framing. We paid $100 for it,” he said, “But it will cost hundreds of thousands of dollars to restore it. Everything will be the same except we will put cedar shakes 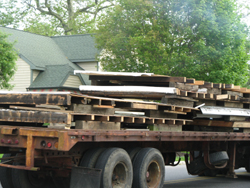 on instead of aluminum siding,” which is keeping with the period. As it turns out the new addition, which will be used for Shirley’s father, Mark Phinney’s, private residence, is of the same time period as Elaine’s Dinner Theater and Inn.

The two-story, six room house has a colorful past. According to Ron, it was once a speakeasy. When the movers were taking the house apart, Ron found fake walls and pipes behind it that were used for the stills. 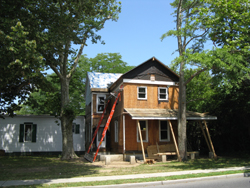 “I was told that the original door [with the window that opened and you said, ‘Joe sent me.’] was still in the house until just a few months ago.

Ron and the Phinney family are doing the restoration themselves and hope it will be finished and ready to move in before Christmas.

Right down the road from Elaine’s and just around the corner from the Broad Street Speakeasy was the home of The Village Bike Shop on Lafayette and Elmira streets. It is still home for the bike shop, but come fall, owner Dennis Flynn will have 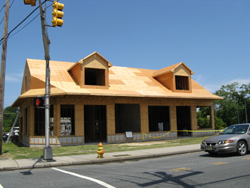 a proper place to sell and rent his. He and his partner at the Lafayette Street site, Bob Gilbert, are constructing a two-store retail space. The second building will be available for rent.

And speaking of a past, Flynn and Gilbert bought the property back in 1990. At the time it was the site of Pete’s Tavern, which the two demolished in 1992. Pete’s Tavern was owned by a Cape May Point couple. After the death of the wife’s husband, she sold the liquor license to The Washington Inn. 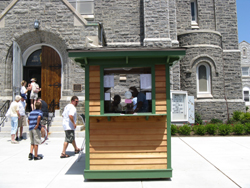 Hey Look at this! Along with a new landscape at Our Lady Star of the Sea Church, the car got a new ticket booth. Or was it the ticket sellers who got a new booth? Well, either way, it looks adorable.In terms of small changes which took place since last month, a new store next to Heather’s Hair Salon opened call Americana, selling, you guessed it, all things American. 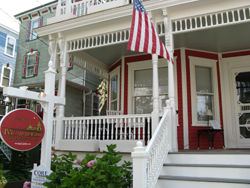 And make sure to take note of the new look at 22 Jackson Street. Spiffy new colors for a spiffy new season.