One of the joys of living in the Great Garden State is summertime produce. 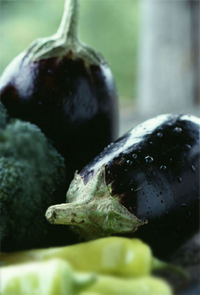 New Jersey corn and tomatoes get the big press and for good reason. They are well liked summer vegetables and Jersey grows some of the best in the world. But there is the ugly step-sister of produce, one people either love or hate. It doesn’t have the sex appeal of tomatoes or the iconic appeal of being a staple of Native Americans and early settlers. But this vegetable, technically a berry, is delicious and versatile. I am talking about that purple oblong absurdity the eggplant.

Eggplant – a member of the nightshade family just like potatoes and tomatoes – originated in India and Asia. That’s right. This staple of Mediterranean meals wasn’t introduced to Europe or the Middle East until well into the middle ages when Arab traders brought it home from their Asian trips. Due to its membership in the nightshade family, the eggplant was once thought to be poisonous, a fact not helped by its sometime bitter taste. The bitterness is caused by the tiny soft seeds which contain trace amounts of nicotine alkaloids. No, eggplant is not a gateway vegetable that will lead you to smoking tobacco (another cousin plant) or to hardcore vegetables like turnips and rutabagas.

Eggplant is bitter when raw, but with careful handling and preparation, it yields a golden buttery taste and texture.

When preparing eggplant you have a couple of choices to make. First, is skin on or off? The eggplant skin is technically edible, but is difficult for some people to digest. The skin also provides structure. Without it the flesh will be shapeless. Next choice is whether or not to salt the eggplant then rinse it to help remove the bitterness. Some modern varieties of eggplant are less bitter and don’t require this step, but due to the varying types of eggplant, it is a step that, in most cases, I prefer to take.

Eggplant has a unique capacity for absorbing fats and sauces. The salting process affects the ability of the eggplant to absorb fats. Aubergine (what the French and English call eggplant) is also incredibly versatile. It fries well, can be stewed, roasted, grilled, sautéed or baked. It features prominently in many cultures from its Indian birthplace where it takes starring roles in curries and chutneys to the Balkans and Greece where it is the backbone of the classic Moussaka. Then onto Italy where it is Melanzane alla Parmigiana. In the Mid-East it is roasted and combined with tahini in Baba Ghanoush – a wonderful spread and great fun to pronounce. In France it is the principle ingredient in the classic Ratatouille, the dish not the movie. In America it has taken a prominent role on the grill and in vegetarian sandwiches. Its versatility is not only in cooking methods, but its ability to absorb and take on flavors while still maintaining its own unique flavor and texture.

Before this summer is out embrace that oblong purple berry and try these eggplant dishes Baba Ghanoush, Moussaka and Grilled Eggplant Tomato and Goat Cheese “Sandwiches.” Until next month, Bon Appétit.

This dish has three parts – preparing the eggplant, the meat layer and the béchamel –then it is combined and baked en casserole. Bake in a lightly oiled 9x13x2 baking pan.

To assemble in baking pan:
Lay eggplant overlapping to completely cover pan top with a little meat mixture. Continue layers until all meat and eggplant is used. Top with béchamel and remaining cheese. Bake uncovered at 350° for 1 hour. Let set for 15 minutes. Serve.