American Spiritualism is “completely Victorian,” according to Elan Zingman-Leith, curator for the Mid-Atlantic Center for the Arts (MAC). And it all began with the Fox sisters up in Hydesville, New York in 1848. Strange noises – knockings and rappings – were coming from the bedroom of John and Margaret Fox’s two youngest 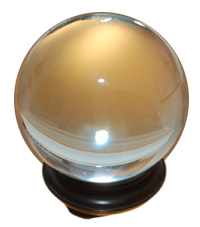 daughters, Katherine, age 11, and Margaretta, 13. Mrs. Fox heard the noises and came to the conclusion that they must be spiritual in nature. She brought the neighbors in to question the girls. Had disembodied spirits taken hold of them and if so, what information did the girls have of those “on the other plane” obviously so intent on making their presence known using these two young girls as their “medium”?

The girls answered all the neighbors’ questions – why wouldn’t they? It was a small town and they were intimately familiar with its comings and goings. The publicity surrounding their strange ability to go into a trance and call on the spirits of the dead aroused the attention of their older sister, Leah (Fox) Fish, living in Rochester, New York.

Leah knew a good thing when she saw it and made the sisters famous. On November 14 at Corinthian Hall in Rochester, Katie and Maggie called upon the spirits in front of an electrified audience of 400 people. Several investigative committees were formed to look into The Rochester Rappings and found the girls to be credible mediums. Their spiritual forays came to the attention of the very influential New York Tribune editor, Horace Greeley, who recently lost his youngest son, 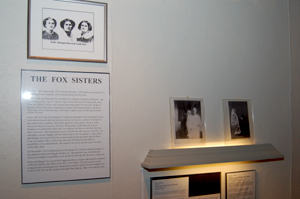 and was desperate to “contact” him. He was so impressed with the sisters he brought them to New York and made them national stars.

Eventually, many years later, Kathy and Maggie confessed that the “knockings” came from apples the girl tied to a string and dropped to the floor. The “rappings” came from a talent the girls had acquired – they could make rapping noises by flexing the joints of their big toes. They wanted to give up the charade long before. In fact, the first “knocking-rappings” were heard in March of 1848 and by November the sisters had tired of the attention and announced that the “spirits had left them.” But their sister, Leah who saw the fortune that could be made, wouldn’t hear of it and so the spirits returned.

At MAC, Elan noticed that ghost writer Craig McManus’s appropriately titled Ghostwriter Trolley Rides were so popular that MAC added more tours involving ghosts – Tale of Terror Trolley Ride, Miss Parmentier’s Psychic Teas, Historic Haunts Combination Tours, Phantoms of the Physick Estate. It seemed people couldn’t get enough of the spirit world and it got him to thinking: Why were the Victorians so enthralled with “the other plane?” He came up with a few ideas on that very subject and it has been the topic of an ongoing exhibit at the Carriage House of the Emlen Physick Estate on Washington Street called The Other Side: The World of Victorian Spiritualism which ends Nov. 9. The exhibit explores the world of séances, Ouija boards, fairies and ectoplasm through photographs and artifacts and shows why the Victorian 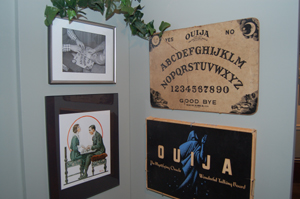 world was so fascinated by mediums and psychics and includes the story of the Fox sisters and several other noted mediums of the time.

Although interest in Spiritualism began before the Civil War, it really took off after the war in which at least 618,000 Americans died. Some experts say the toll reached 700,000. “So many people lost family members, especially teenagers, in the Civil War,” said Elan, “To believe that death was not so final and that their loved ones were still among us, but just on another plane, was one way to deal with death.”

Elan found the growth of Spiritualism curious because it “did not come out of either Protestant or Jewish theology,” but seemed propelled by people grieving their losses from the war coupled by a burgeoning interest in modern science and Darwinism which developed in the mid-19th century. “People for the first time were,” according to Elan, “beginning to look at the Bible symbolically and perhaps not reading the scripture quite as literally.” In so doing, he said, it appears as though they were 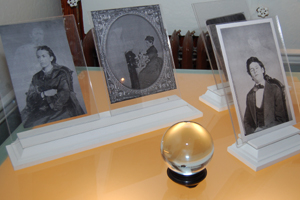 disillusioned, particularly with the Protestant religion, and were looking around for alternatives “and some found that alternative in the world of spirits and the other plane.”

It is then no coincidence that this was a time for new religions popping up. Western New York and the Boston area seemed to be the “hot spots” for their beginnings. Mary Baker Eddy’s the First Church of Christ, Scientist of Boston (Christian Science) was founded in 1879. In western New York, The Church of Latter Day Saints was founded in 1860 by Joseph Smith, Jr. The Theosophical Society of New York was founded by Madame Helena Blavatsky (a famous medium of the time) and Colonel H.S. Olcott in 1875. The pair threw themselves into the defense of reality of spiritualistic phenomena while attempting to purify the spiritualistic movement of its materialistic trend. One odd thing about Madame Blavatsky, according to Elan, even when she was “found out,” in other words, when someone spotted the “trick” in one of her performances, she unabashedly would admit the ruse, maintaining she didn’t care, she “did it for your own good.”

The role of the medium was one of the few times when a woman of Victorian America could make a name for herself and not fall under ill repute. Unlike actresses and singers, a medium was well-respected and could earn a significant income. Séances were common forms of entertainment in the most distinguished of parlors. 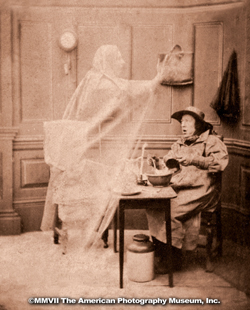 Unless someone was particularly religious and man of the cloth, most people did not seem the harm in “calling up the spirits.” And that popularity, curiosity and a genuine need to reconnect with the dead on top of the money to be made if you “had the gift” helped spawn some of the greatest con men/women of the time. Some of the tools of the trade are also on display. So, if you get a chance walk on down to the Carriage House, for the mere pittance of a $2 donation, you too can discover how to levitate tables and throw your voice across the room. Imagine. It all began with the Victorians, who so desperately wanted to believe. Séances, Ouija boards, spirit writing, levitation, spirit photography, trances and the mediums to connect the spirit world with the living began in the mid-19th century America.

Don’t miss it – it’s a fascinating exhibit especially if combined with one of the ghostly tours.

A sneak peek at the exhibit:

Tags: paranormal, This is Cape May, victorian