This is an abridged version of A Different Kind of Farm, which was first published in the Spring 2007 issue of Cape May Magazine. Text by Karen Fox.

Ever since she was a little girl in Ohio, Barbara Nuessle wanted to live on a farm. It would be 50 years before Barbara – with a stroke of luck – found the farm of her dreams. “I really thought I was going to raise horses,” she says. Instead she raises alpacas with her husband Warren. 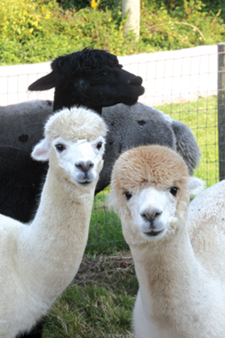 There’s a long clamshell lane that bridges over a spring-fed pond, and at the end sits a handsome cedar-shake farm-style house that Warren designed with wrap-around porches. Warren can be seen moving quickly to his commercial mower that he operates about three hours a day to keep up with the fast-growing lawn and pasture.

Barbara is standing at the fence on her 10 acres in the Cape May countryside admiring her alpaca herd – especially the new-born babies on wobbly legs. The other members of the herd are kicking up their heels in the meadow sprouting green in the warm spring sun. The delights of this perfectly picturesque setting are the alpacas walking, their heads up high. The little ones break away, necking and rollicking along the fence row. Barbara loves hanging out on the fence. The alpacas are mesmerizing. They are so quiet. The color of their thick fleece has a wide range: white, beige, light fawn, dark fawn, light brown, dark brown, rose gray, silver gray and black.

“My first impression was sweaters on legs,” says Barbara with a chuckle. As a serious knitter with an understanding of excellent yarn, s 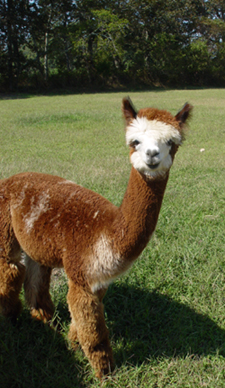 he knew alpacas grow a fine fleece that rivals cashmere in luxurious feel and durability.

The year was 1993, and the Nuessles decided to buy 10 acres of the old Doug and Carol McPherson farm, one of the last working dairies in Cape May County, which in 1993 grew lima beans.

Instead of planting lima beans, springtime at Bay Springs Farm now means shearing time when professionals are called in. Each alpaca produces five to ten pounds of fleece. The fleece is sorted and prepared to be spun into yarn for knitting, crocheting and weaving. Eventually the Nuessles’ homegrown fleece is available at their Farm Store at the rear of their home. Artfully arranged are skeins of alpaca yarn in soft colors plus items that Barbara has knitted herself. There are alpaca blankets, sweaters, socks, booties, mittens and scarves handmade in Peru.

Alpaca farming is an everyday commitment to nurturing. The barnyard chores come first, no matter how severe the weather. One 18-degree morning this past February, Barbara was up with the first streaks of dawn to see snow blowing sideways. “No golf for Warren today,” she said at breakfast. The bay winds cut icy swaths across their fields and into their layered barn clothes. Warren rides the golf cart, juggling buckets of warm water for the boys in the front pasture, but finds they have taken shelter in the barn. Barbara totes pails of hot water to the girls and their young ones snuggled inside. “Alpacas love the cold, but they don’t like wind and snow,” she said. Barbara mucks the barn and puts down fresh sawdust for the girls. 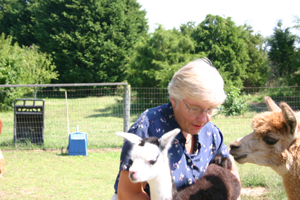 It’s 10 o’clock, time for alpaca breakfast: Barbara pours 10 pounds of feed into a large bucket, mixes in some minerals, and parcels out a cup or two into individual feeders. She scatters some hay, and a top dress of alfalfa, a gourmet treat. By 10:30 a.m., Barbara is peeling off her chore clothes, then ordering a case of kale and carrots for the herd. She’s off to the grocery store to pick up provisions, making a stop at the post office to mail fleece samples for a national yarn competition. Before a lunch of produce from last summer’s garden, Barbara and Warren bundle up again to check the alpacas, all snug and humming, as they do when they are happy, and stock up the many birdfeeders dotting the landscape.

Before and after 4 p.m. chore time, Barbara catches up on computer work: ads and photos for studs for hire, and for sale. She preps for an alpaca association teleconference from 8 – 11 p.m. She takes a look out at the barn at midnight. All is well, though the Bay winds howl. She curls up with a book and can’t wait to do it all over again tomorrow. Alpaca farming is a labor of love.

Mild-tempered and gregarious as alpacas are, they have their eccentricities. It’s true, they spit, Barbara confirms, rarely at humans – but occasionally at each other. 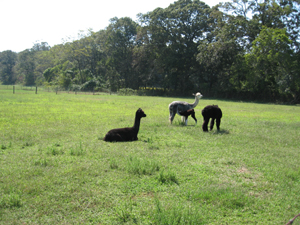 The spit is chewed up grass, odorous, but harmless. It’s their immediate defense system. They are herd animals but like their own space, especially when lounging in the barn.

Though located off the beaten path, Bay Springs Farm plays host to more than 3,500 knitters, spinners, tourists and families who want their children to see the alpacas. The farm is located in one of the only remaining natural dune forests, bordered by the 1,500-acre Higbee Beach Wildlife Management Area on one side, and the preserved Hidden Valley Ranch on the other.

“We just never know who might be dropping in,” says Barbara. “And you never know who is knitting these days. A lot of young people are taking up knitting because they appreciate handmade things, and they knit for social reasons. They call their groups ‘Stitch ‘n Bitch.’ Boys, too, are knitting. I had an 11 year-old customer who was totally into fiber and interested in becoming a designer.”

Planners that they are, Barbara and Warren have taken steps to preserve their dream-come-true for future 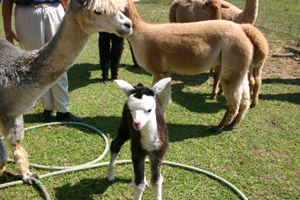 generations. Bay Springs Farm is now part of the New Jersey Farmland Preservation Program, which protects it from development. Their 10 acres joins the hundreds of preserved acres on their boundaries. The goal is to keep the fields and forest as they are forever.

Dreams? Well, Barbara got a horse of her own at age seven. He was a brown and white Pinto named Chuck-A-Luck, which she rode every day. “My horses were my loves,” she says thinking about those days. Today, when she walks out and gazes upon her herd, it’s easy to see who her new loves are.