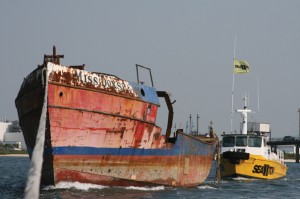 This article originally appeared in Cape May Magazine, Winter 2008.

On any given day the most popular fishing ground off Cape May is none other than the Cape May Reef, aka the Sanctuary. Located 9.1 nautical miles from Cape May inlet on a course heading of 128 °, it is home to more marine species than any other marine structure inshore. The Cape May Reef is man-made and is the largest artificial reef, at 4.5 square miles, and the oldest artificial reef site in New Jersey. The Cape May Reef was originally started in 1982 by the Cape May County Party and Charter Boat Association. In 1984 the Department of Environmental Protection (DEP) Division of Fish and Wildlife took over all reef building responsibilities in the state from several private reef associations. It’s been a true success story between man and nature.

The objectives of the reef program are to provide: 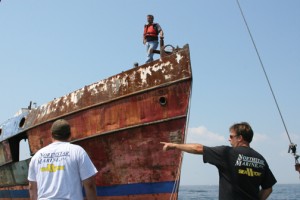 By constructing and managing reefs, the goal is to spread the benefits of the reef’s resources to as many people as possible.

At less than 10 nautical miles from the inlet most boats have the range to fish the Cape May Reef. There are currently two other reef sites off the coast of Cape May County within 10 miles of major inlets: the Wildwood Reef and the T.I. Reef. There are a total of 15 reef sites encompassing a total of 25 square miles of sea floor in New Jersey. Part of the reef’s goal is not to change New Jersey’s marine environment, but to enhance a small controlled portion. Reefs such as the Cape May Reef are home to over 150 marine species. Some of the most common species preferred by anglers and divers are black sea bass, summer flounder, tautog, blue fish, Atlantic bonito, porgy and, of course, lobster. 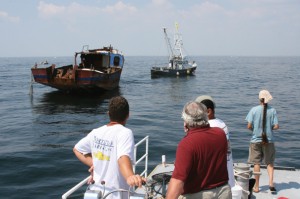 The Cape May Reef works like this: a hard substrate in the ocean provides an attachment surface for a variety of encrusting or fouling organisms called epibenthos such as mussels, sponges and barnacles. This creates a protective mat for species at the bottom of the reef’s food chain, which includes Crabs, Snails and Shrimp. In the middle of the reef’s food chain are bottom fish, like Sea Bass that feed on Crabs and Tautog that feed on Mussels. Schooling bait fish migrating through tend to like high structures such as sunken ships. Pelagic predators (free swimming) including Sharks, Blue Fish and Mahi Mahi are at the top of the reef’s food chain feeding on these bait fish and each other. Hard substrates also protect fish from not only predators but surges and current. Reefs create a cycle of life that is critical in supporting life in the ocean. 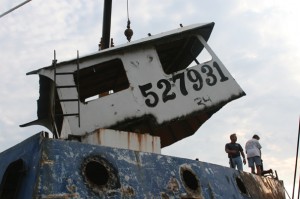 The wheel house is removed prior to sinking

Since New Jersey has a very gently sloping, shallow coastal floor with very little hard structure such as outcroppings, and, although there are an estimated 500 to 3,000 shipwrecks off  New Jersey’s coast, many of these wrecks are slowly destroyed over time by the forces of the sea. The intentional sinking of vessels helps to replace deteriorating wrecks. As of 2007, the Cape May Reef is home to 21 sunken ships such as clam boats, Coast Guard cutters, cargo ships and tug boats. Other structures sunk at the reef are subway cars, barges, concrete ballasted tires, concrete castings and army tanks. All of these ships and structures have to be cleaned of all pollutants and pass a U.S. Coast Guard pollution inspection. All loose and floating debris must be removed as well. The next step is to vent all internal water, tighten bulkheads and, in some cases, cut holes just above the water line to assist in the sinking of the vessel. These holes are covered with a “soft patch” such as plywood to prevent leaking during the tow to the reef. 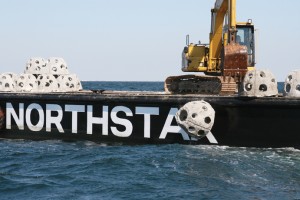 Another very important structure are reef balls made entirely of concrete four feet in diameter and weighing 1,800 pounds each. These reef balls resemble small igloos with many holes. In the fall of 2007 over 500 of these reef balls will be towed by barge by Sea Tow Cape May and sunk on the reefs’ sites off Cape May County. It’s important to note that most of the sinkings of these structures are funded by the private sector such as the sportfishing fund and non-profit organizations that have raised donations from fishing and diving clubs. Without these clubs and organizations much of the success from the reef program would not be possible. 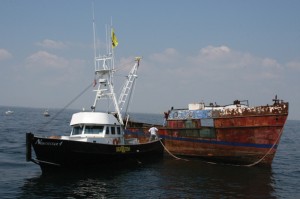 Most of the fishing on the Cape May Reef is done by drifting and fishing off the bottom and, since it’s such a large reef with so much structure, fishermen can make long drifts and the reef can handle hundreds of boats fishing the reef at the same time. Most of the drift fishing is done in the middle of the reef in approximately 65 feet of water. The northern end of the reef is the shallowest area – about 55 feet. Wrecks and reef balls are spaced far enough apart that boats can easily anchor. The lower end of the reef is the deepest at about 70 feet. Here there are larger wrecks and subway cars. This area is preferred by scuba divers. Many party and charter boats fish the Cape May reef daily from late spring through the fall. Most of these trips last between six and eight hours. 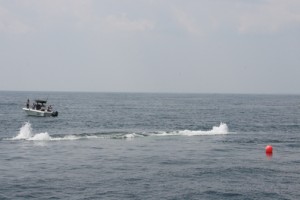 Artificial reefs such as the Cape May Reef ensure fishing for future generations. So, next time you fish the reef and your fishing rig gets snagged, think of what’s below you and all the work it took to enable you to catch that fish!

Stephen Spagnuola, a graduate of Visual Arts, New York City, worked as art director for many ad agencies in New York before leaving advertising to pursue fashion photography, and worked on such magazines as Stuff, Flatiron, and Zink. Stephen is a freelance photographer and marketing director for Sea Tow Cape May. Visit Steve online

Tags: Cape May Magazine, fishing, off the hook, This is Cape May