In 1885 a schoolteacher,  BJ Cigrand, of Fredonia, Wisconsin Public School, District 6, first originated the idea of celebrating the flag on June 14 – the 108th anniversary of the official adoption of The Stars and Stripes. He called the event, ‘Flag Birthday’.
On June 14, 1891, the Betsy Ross House in Philadelphia held a Flag Day celebration, and on June 14 of the following year, the New York Society of the Sons of the Revolution, celebrated Flag Day.
On April 25, 1883, Colonel J Granville Leach, eldest son of Joseph Leach, publisher of the Cape May Ocean Wave, who, at the time was the historian of the Pennsylvania Society of the Sons of the Revolution, suggested the Pennsylvania Society of Colonial Dames of America  adopted a resolution requesting the mayor of Philadelphia and all others in authority and all private citizens to display the Flag on June 14, and that the day become officially known as “Flag Day” and that school children be given flags to celebrate the event.
Two weeks later on May 8th, the Board of Managers of the Pennsylvania Society of Sons of the Revolution unanimously endorsed the action of the Pennsylvania Society of Colonial Dames. Then Superintendent of Public Schools of Philadelphia Dr. Edward Brooks directed that Flag Day exercises be held on June 14, 1893 in Independence Square.  Each school child carried a small Flag, sang patriotic songs and attentively listed to addresses delivered. 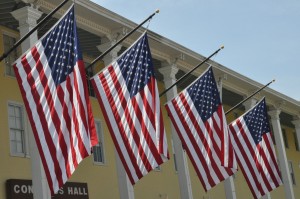