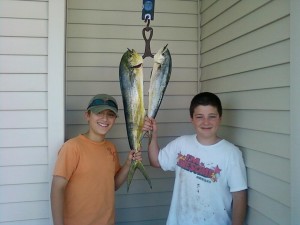 Tuna? We’ve got the tuna, yellows, blues, even a big eye. Out of South Jersey Marina in the past couple of days we’ve had the Raging Bull, Hooked Up II and Foray, bringing in everything from a 20lb dolphin, to a 47lb yellow fin tuna. Heaviest catch in the past week was the 202lb Big eye that was caught on the Gold Rush with Captain Avena. The Easy Rider released 2 white marlin; Super Crew also released 1 white marlin. These fish are reported to be biting strong in the Wilmington. The marlin bite has been reported to be quite descent for this time of year with some action reported in the Spencer.

As for the inshore fishing, the Cape May reef and the Old Grounds have been the destination for good flounder and black sea bass fishing. This week on Murders Row, the Cape Queen, Common Sense and the Big Game all had a fair amount of flounder and black sea bass, reporting that fishing was going well. The Cape Queen went out today (July4th) just SW of Cape May 20 miles offshore bringing in 2 dolphin.

Tags: This is Cape May, what's running