Cape May, NJ – Cape May Stage, a professional South Jersey Equity theatre company, is honoring actors Lynn and Ron Cohen at the annual NJ Theatre Alliance Applause Awards this year at the Bickford Theatre in Morristown, NJ on October 18, 2010.  Lynn and Ron Cohen have chosen Cape May Stage as their artistic home and have committed to sharing their work with our community bypassing far more lucrative and higher profile projects.

Lynn Cohen is best known for playing the nanny in both the television and film versions of Sex and the City.  She played Golda Meir for Steven Spielberg in Munich and played opposite Vanessa Redgrave in Orpheus Descending on Broadway.  Earlier this season, she played opposite Jane Alexander in Chasing Manet in New York.  She is frequently seen on all of the Law and Order shows and was featured on Damages. Lynn has worked with the leading directors in film and television and theatre and chooses to return season after season to work with Artistic Director, Roy Steinberg.

Ron Cohen is a respected actor with recent credits including Sarah Ruhl’s new translation of Chekhov’s Three Sisters at Cincinnati Playhouse in the Park, and another adaptation at The Working Theatre in New York.  He also had role on HBO’s Boardwalk Empire, and a new film being shot in Florida Not Waving but Drowning.

In addition, Lynn and Ron Cohen participate in the Stage’s Annual Giving Campaign by writing the solicitation letter.  They also allow themselves to be “raffled off” for dinner at our fund-raisers.  They do this because they believe there is something special going on at Cape May Stage.

Their artistic and promotional gifts are a treasure to Cape May Stage and the organization is grateful for their commitment and support. 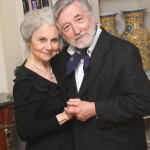