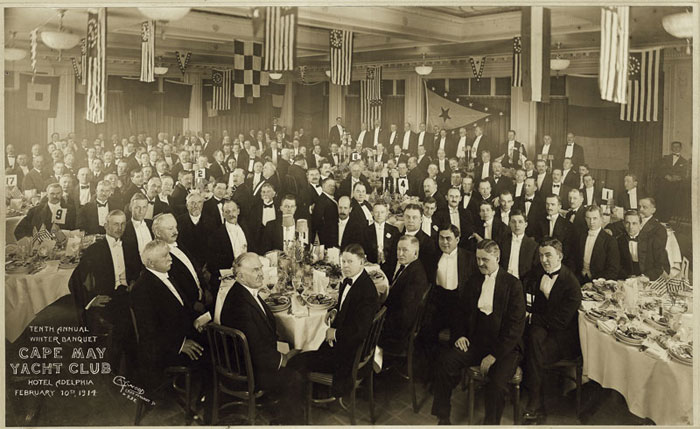 This article originally appeared in the Spring 2009 issue of Cape May Magazine. The dates have been updated to reflect the current publication. Photographs courtesy of Judy Lord, and postcards courtesy Don Pocher, both members of the Corinthian Yacht Club of Cape May.

There was no Harbor. There was no Canal. The paint color on your cottage, store or bordello was entirely your own business. At least no one could argue that it wasn’t “authentic.” Few quibbled over morals, either. Steamships brought gamblers, families, the wealthy and the devout bound for the religious retreats at Cape May Point. All were dumped pell-mell right on the sands at Sunset Beach. South Cape May was dry and populated. East Cape May was under water. The country was in a recession that began with a sharp drop in 1873 and then lazily spread out all over the rest of the decade, creating havoc elsewhere in the land. But far from all that madness, the boathouses of would-be yachtsman from Philadelphia lined cool, breezy Madison Avenue overlooking the Cape May Sound, at least according to the club’s website. 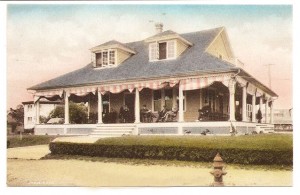 The Corinthian Yacht Club of Cape May started in 1872, the same year as its predecessor in London, the Royal Corinthian Yacht Club. The Cape May launch came about a year after the city’s large hotels put up the money to begin the Cape May Cup and a year before the recession hit. The club’s roots were in Philadelphia. Once a powerful maritime presence, Philly has had its share of ups and downs. It’s also had its share of Corinthians: wealthy sportsmen like Wanamaker and Drexel who embraced the Olympic spirit of amateur competition, then refocused it as an excuse to keep boisterous and low-brow professional sailors out of their clubs.

The Corinthian Movement swept through Britain and the States like a very affluent fever. According to the Royal Corinthian Yacht Club’s own archives, “The members of the new club in 1872 were pleased to be known as ‘Corinthians,’ emphasizing their intention to helm their own boats, although paid hands were still allowed. The term was greatly used in the sporting world of those days and perhaps those who had received a classical education connected it with the Isthmian Games held at Corinth in honour of Poseidon and found it singularly appropriate for yachtsmen.” 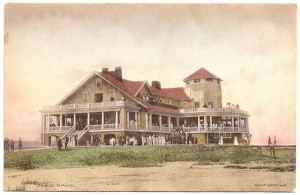 Club House of the Corinthian Yacht Club, circa 1918

Can’t you just hear those early Corinthians now? “Isthmian? Steer it myself? Right you are. Now how do you steer this thing?”

Before then, wealthy yacht owners enlisted the help of professional captains to help them win races or nip up to the Great Egg. Few of them could actually steer their own crafts before the movement began. Fascinatingly, fewer still checked their history. The Isthmian games were never about Poseidon (it was a funeral rite for Melicertes). The games occurred about as far inland as you can get on a land bridge behind the city of Corinth with plenty of room for nautical games like chariot racing and poetry competitions. Ahh, Corinth. How little we knew ye.

But history is a wonderful and funny thing. Rich boys go to school, get a vague idea about true Olympic spirit and truces between nations and garlands of celery in their hair (yep celery) and grow up to buy beautifully “yar” little sea crafts they didn’t want to share with stinky sailors. End result, you had to have learned sailing as an amateur to make it into their cup races and clubs – preferably a rich, well-connected and well-behaved amateur. Although later they made special exemptions for wealthy men who’d learned in the Navy. It wasn’t long before these men brought the notion of elegant sportsmanship with them to Cape May, where it flourished. 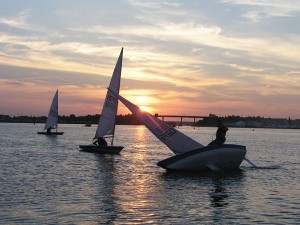 Laser race in the harbor

To this day, the Corinthian Yacht Club of Philadelphia boasts that it is one of the oldest in the country dating from the mixture of older “Corinthians” that came together in 1892. Older still, the Corinthian Yacht Club of Cape May has held its charter since 1872, in one way or another. Before then, one could enjoy the excitement of a boat race in other ways: charter a small sailboat called the Harriet Thomas for daytrippers. Or if you could afford a yacht of your own and find a local Cape May pilot to steer it, the thrills of the shoals and canyons could be yours by the week. Then there was the early Cape May Cup: starting from the Iron Pier at the end of Decatur Street and looping around Five Fathom Light which, at that time, was still a ship. Now, sadly, it’s just a large buoy about 14.7 miles off the coast of Cape May.

After the amateurs took over the racing scene, one of the Philadelphia Corinthian Clubs won several Cape May Cups. So did their rival the New York Yacht Club. The highlight of the Cup came in 1903, when the Prince of Wales himself won the race on his yacht, the Britannia. The future of the elegant yacht club seemed secure, and when Cape May Harbor was created beginning in 1903, it only made sense that the new headquarters for all things boaty be there.

What of the local sailors and their sailing yachts? Actually, there were a few. They started the Cape May Yacht Club in 1872 and moored at Schellenger’s Landing. Then they built a new clubhouse on what was then Cape Island Creek. We now know it as the “Boathouse Row” between Washington and Lafayette streets just off the harbor. Although these local sailors may not have been ready to rub elbows with His Majesty, their cozy little clubhouse became one of the hottest tickets in town. There they were in 1907, looking over what was going to be the most exciting public works project in history! A harbor for Cape May! A channel to the Atlantic Ocean! New dry land (provided by the dredge spoils of the channel) from Schellenger’s Landing to Madison Avenue! Not only was Cape May getting a fancy, deep new harbor – the island was growing bigger in the process! What could go wrong? 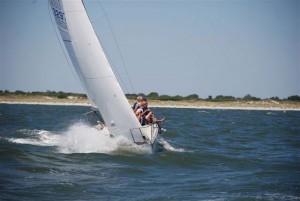 We may never know exactly what prompted the fight, but by 1913 the Cape May Yacht Club was split in half, with the wealthier half becoming the new members of the old Corinthian Yacht Club. They instantly set about building a much fancier clubhouse on Yale Avenue. They dedicated their new palace (complete with guest rooms, verandas looking out over the water, and a huge turret) on the same day in 1913 that the entire harbor was dedicated. The boating world turned out for the dedication. By sheer proximity the new Corinthian clubhouse was oohed and ahhed over by visiting dignitaries, crowds of the curious and jealous yachtsmen. The passing destroyers Jenkings, Fanning and Vixen admired the Corinthian’s fancy clubhouse so much the Navy requisitioned it when World War I began the very next year. Instead of lobster salad and the swankiest of sets, the beautiful structure became a part of the war effort.

The enthusiasm for the Yacht Palace must have paled in the face of the Great War. After the fighting ended, the building became a boys’ camp. (Ironically, the Navy took it back again at the beginning World War II, this time making it a permanent part of the Coast Guard Base. What’s left of it is now used to house flammable materials, according to the Corinthian website. Imagine for just a moment what it was built to be, and realize it’s now an expendable shack.) 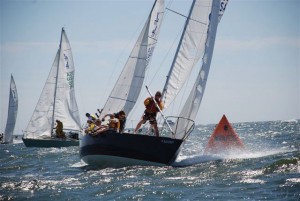 World War II ended and the last time anyone had heard of the Corinthian Yacht Club – even in passing – had been in the early ‘40s. “They disappeared,” says Jack Sayre, one of the longest running members of the current Corinthian Yacht Club. Kirby Thompkins tried to bring the old club back with the Peter Shields as headquarters, but after three years even that ended. Had too much time passed? Had the world moved on too much?

Maybe only in part. “In 1948, a group of 15 college students got together and called ourselves the Harbor Sailing Club,” says Jack Sayre.

“We started out across the harbor [off Ocean Drive]. Then the city gave us some land at the end of the street [at Buffalo and Delaware avenues]. Our first ramp was two telephone poles. We sailed a mixed bag of sailboats – whatever we could get.” The determined crew got together to clear out the underbrush and trash on the waterfront – each bringing his own equipment, spending his own money, and working like dogs. They attracted some attention leveraging it into fund-raisers, balls, fashion shows, and a lot of respect. Over the next few years, they bought new boats, and constructed a bulkhead of $50 concrete blocks (with members’ names on them) big enough to be a dance floor in a pinch. 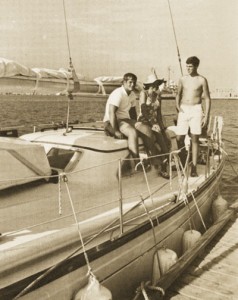 The sailing world took note. “Well, some people from the newspapers came and took our pictures,” says Jack. “Some of the original members of the old Corinthian Yacht Club saw those pictures and came to us. They said, ‘We have a name, we have some money in the bank, and we have a liquor license.’ The only thing they asked was that we use their name. The old Corinthian clubs have a kind of affiliation with each other – a kind of informal understanding. They extend privileges to each other.” The kids just wanted to sail, and now they not only had the prestige of one of the oldest names in sailing, they had the ability to build a clubhouse of their own, make some money and do it up right. So in 1959, the plucky little Harbor Sailing Club became the newest member of the Corinthian athletic family. 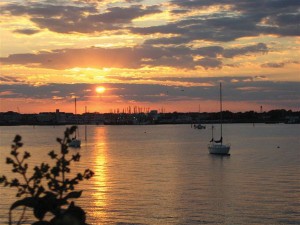 The Corinthian Yacht Club name finally found the sailors it needed to flourish. In the last 50 years, the Corinthian has grown bigger and the clubhouse lovelier, true enough. But more importantly, the Corinthian sailors are finally doing what those elegantly muddled sportsmen originally intended: bringing the pure spirit of competition and good sportsmanship to the beautiful science of sailing.

“We’re 760 members strong and financially sound,” says Jack Sayre with notable pride. “We have an active J24 fleet, an active 420 fleet, and active Laser and Sunfish fleets. And we have an Optimist fleet – that’s a small boat for the little guys. We offer sailing lessons to the little ones every summer. Parents don’t have to be a member. That doesn’t matter if the children are interested.” They have adult sailing classes, too, so it’s officially never too late to learn. They host regattas, kids’ races and fundraisers for other local charities in their clubhouse overlooking the harbor. 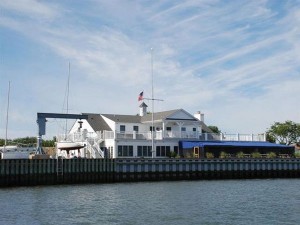 Now, 139 years later there is a Harbor, there is a Canal. The paint color on your cottage, store or bordello is everybody’s business and subject to Historic Preservation Commission approvals. Members of the Cape May Corinthian Yacht Club can sit on the club’s veranda or look out the large picture window of the new second story and see members’ sailboats bobbing in the harbor among the sleek, rich yachts that tie up elsewhere, the Coast Guard cutters, the whale and dolphin watchers, kayakers, commercial fishing trawlers. They all ply the same waters. They all vie for the same sea space – forced democracy in the day of a still members-only sailing club.

As for the clubhouse itself, well, I’m sorry to say there’s no turret. Hey, what do you expect? It was built entirely by amateurs.

Visit the Corinthian Yacht Club of Cape May online at www.cyccm.com.