This article originally appeared in the Spring 2009 issue of Cape May Magazine. Vintage map and postcard courtesy of Robert W. Elwell, Sr. 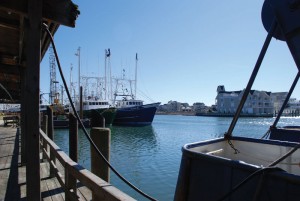 Cape Island received its name because it was separated from the mainland by a small creek.

In 1691 a map by Thomas Budd showed that Cape Island was a little spot on that map of Cape May County.  The spot was at the south end of the map, which showed a peninsula.  On a later map, dated 1850, by Nunan which was more distinct and better drawn, one can see clearly the area called Cape Island.

Most people believe that Cape May City was named after Cornelius Jacobsen Mey and, in a way, it was. Captain Mey (the Mey was later anglicized to be spelled with an “a” – May) was a Dutch sea captain who explored the Delaware Bay and River in his ship Glad Tidings. He was appointed the first director of New Netherland (most of New Jersey) in 1623. Captain Mey named the peninsula after himself with the “Cape” being the peninsula and the “Mey” being his last name.  So in essence he really named the area of Cape May County. 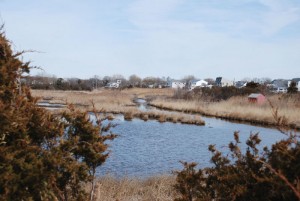 The end of the creek at Mt. Vernon Street entrance to the beach.

Nunan’s Cape Island was an area of land surrounded by a creek or ditch. It was said to be about three miles long with its broadest part about one-half mile wide. The boundaries of Cape Island started at the Atlantic Ocean and the Cape May Inlet – which was formerly known as the Cold Spring Inlet. Going south, the boundary continued about 3,500 feet past what is now the Third Avenue jetty at the south end of Beach Avenue. Around this point there was another small inlet which dumped into the Atlantic Ocean, which is now filled in. This was part of Cape Island Creek, which ran to what was called Mt. Vernon Bridge on Broadway, near Grant Street.

The boundary ran from Mt. Vernon Bridge up Broadway to West Perry Street, making a turn east to where Cape May Miniature Golf Course is located today at West Perry and Jackson streets. There, Cape Island Creek picked up again and ran northerly somewhat parallel to Lafayette Street until it reached Schellenger’s Landing.  The first little bridge one goes over going out of town is called Cape Island Creek Bridge. The Cape Island boundary follows the creek past the Lobster House and the channel back to the starting point of Cape May Inlet and the Atlantic Ocean. Thus, it is Cape Island Creek that made Cape Island and, by law, the name was changed to the City of Cape May in 1875. 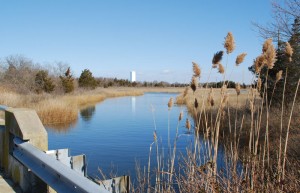 Cape Island Creek at the bridge on Elmira Street.

The next reference to Cape Island after the Budd map of 1691 was when George Eaglesfield, in 1699, built a causeway connecting the island with the mainland.  The first legal reference to Cape Island was in 1796 when a law was passed to make a road on which boats could be stowed. The History of Cape May County, New Jersey, published in 1897 by Lewis T. Stevens, does not name the road and I can only guess that it may have been Lafayette Street which was a cow path in the early days. Later it was a convenience for wagons and finally adopted as a street. 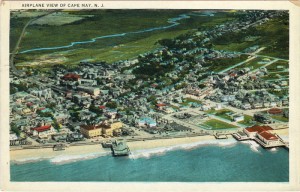 Cape Island Creek shown running across the top of an aerial shot of the City of Cape May, circa 1930. Click for full size.

Even if you “Google” Cape Island on the computer, Wikipedia, the free encyclopedia, has Cape Island all wrong. It says it is “a man-made island at the southern tip of Cape May County” which is totally incorrect. It also says “it consists of Cape May, Cape May Point, West Cape May, and portions of Lower Township.” In reality, Cape Island is made up of only Cape May City. Wikipedia also says that “Cape Island Creek, for a while, was the divider between the mainland and the (smaller) island, but it was mostly filled in and only a small part remains.” This is totally wrong – all of Cape Island Creek is intact except a small portion where Cape May City borders the Township of Lower (at South Cape May beach). Again, this misconception stems from looking at the Cape May Canal which additionally separates the lower end of Cape May County from the mainland. Cape Island is really an island within an island and has been since World War II.