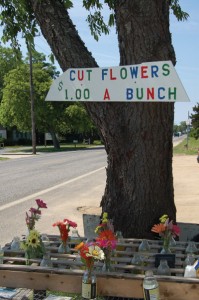 This article first appeared in the Spring 2009 issue of Cape May Magazine.

It is a sure sign of spring when the Taylor Brothers, Charles and Kenneth, open their No Frills Farm for another season. Better than the Farmer’s Almanac, they have a sense of when it’s time to plant. By late April, their simple roadside stand is laden with hundreds of healthy little plants ready to begin life and expectation in garden soil.

The Taylors have farmed this acreage on Seashore Road for generations – since Colonial times. Their property in its heyday stretched from the base of the Canal Bridge to Stimpson’s Lane. Today Charles farms 50 acres. In deference to the Taylors before him, he cultivates with a collection of vintage tractors: a 1972 Massey Ferguson diesel, a 1957 Farmall, a 1951 John Deere, and his favorite, a 1937 John Deere that is started with a manual flywheel with an engine designed to switch from gasoline to kerosene. 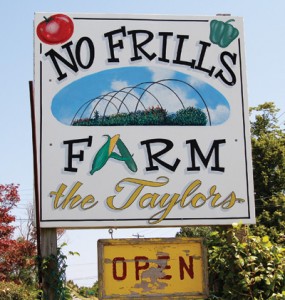 No Frills Farm is a favorite stop for locals and summer people alike. The farm’s rustic handwritten sign was first hoisted in 1980 when the Taylor siblings decided to turn their old dairy farm into fields for growing New Jersey fresh produce which they would sell at a stand with an honor box. For several years, there was not a Taylor in sight, just a fruit jar and later, a lock box in which to stash cash for premium picks of tomatoes, cantaloupe, corn and green beans. Business grew and so did the incidents of thievery. The honor system was replaced with a clerk, happily for the customers on the days Aunt Nancy McPherson minds the stand, selling her homemade beach plum and pepper jellies.

Charles studied agriculture and horticulture at Cumberland Community College, and in 1990, the Taylors decided to add greenhouses to the spread of antiquated barns and a silo. Their attempts at growing plants from seed and seedling plugs were an immediate success. No Frills began offering spring plants that would grow easily in Cape May area gardens: tomatoes, eggplant, cucumbers, zucchini, yellow squash. Soon customers were pleased to find flowers, too: zinnias, cosmos, dahlias, celosia, marigolds. Charles has a penchant for geraniums and enjoys propagating heirloom and scented varieties: apple, apricot, nutmeg, rose, lime, lemon, strawberry, peppermint and chocolate, to name a few of the many.

Brother Kenneth, meantime, began growing herbs in the greenhouse and now has a flourishing business. The wooden tables at No Frills offer a variety of sage, basil, parsley, thyme and lavender. And there are large clay kitchen garden pots already planted with a basic arrangement of herbs for cooking.

“A secret of our customer base is not only keeping our prices for the frugal, but we harden off our plants,” says Charles. “We gently reduce the heat in the greenhouses as the plants mature, forcing them to develop deep root systems for their size; developed roots versus being top-heavy. That way, in Cape May’s unpredictable spring temperatures, the plants will have a good chance at survival once planted. They can hit the ground running.”

Each season brings new challenges and products. Charles has been growing more flowers for cutting. One of his more successful marketing ventures has been arranging little bouquets of colorful annual blooms in Snapple bottles for a dollar apiece. “Our customers are very sensitive to our brand,” says Charles. “If we upgrade, we are scolded, ‘No Frills is getting frilly.’” No chance of that, he insists.

Tomatoes – plants for sale and the crop of 10 or so varieties from the field – are a mainstay of the business. Charles enjoys experimenting with new varieties, especially heirloom tomatoes. The names alone are fascinating: Amana Orange, Aunt Ginny’s Purple, Banana Legs, Box Car Willie, Mortgage Lift Red, Jersey Devil and Hillbilly. There are dozens more. “The tomato study is interesting,” says Charles, “but let me point out that I hate the most loved Jersey crop. I hate tomatoes.”

Charles shapes his farming schedule around his teaching profession. He is a special education assistant at Teitelman Junior High School. At 39, he is a bachelor who says he’s still looking for the “right one” to join him at No Frills Farm with his dozen goats, dozen chickens, dogs, cow, ewe and antique tractors. 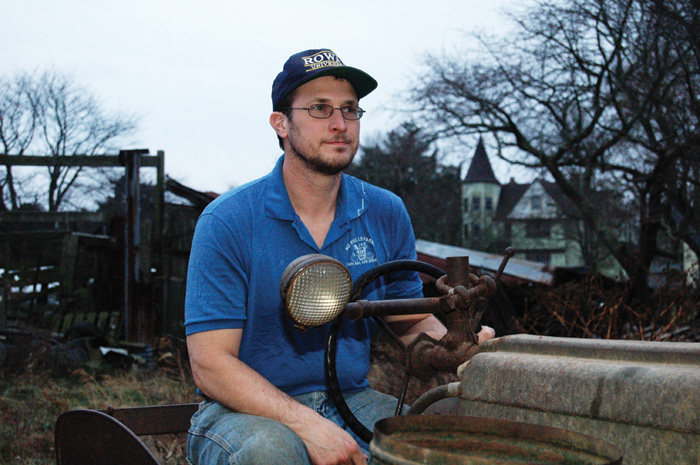 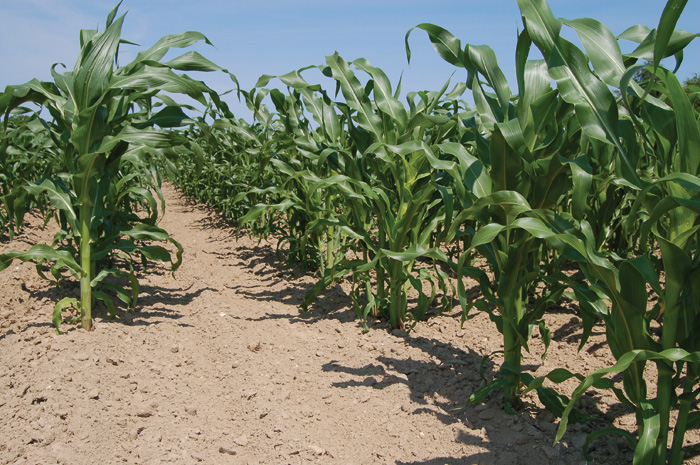 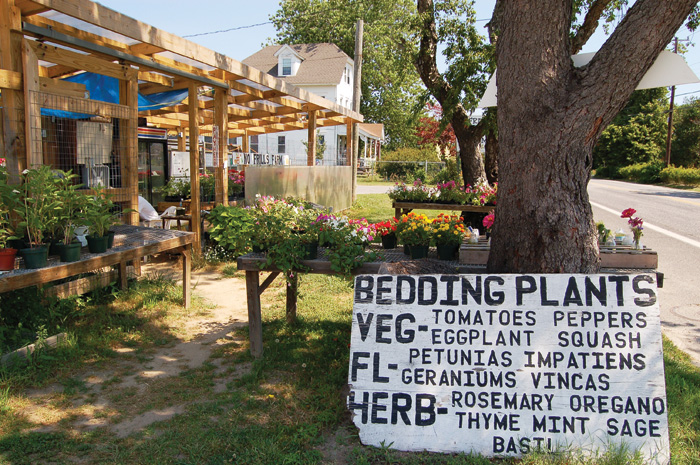 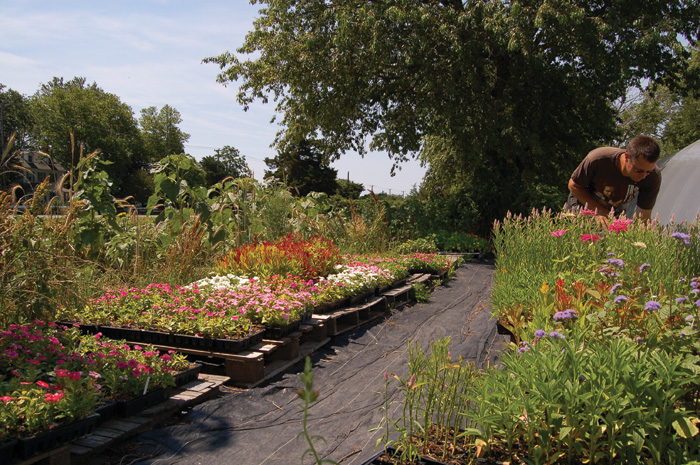 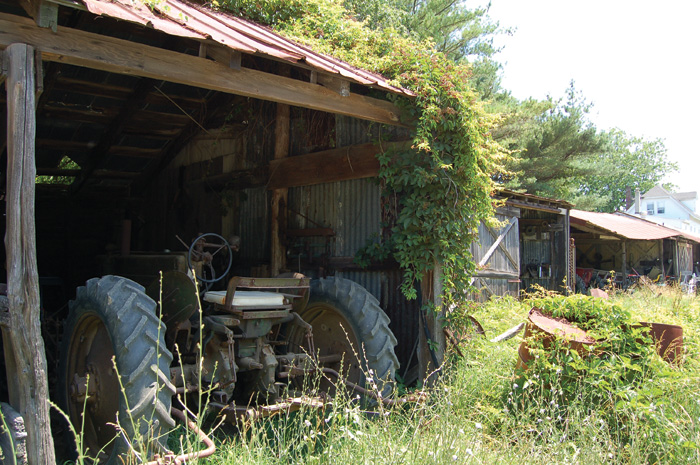 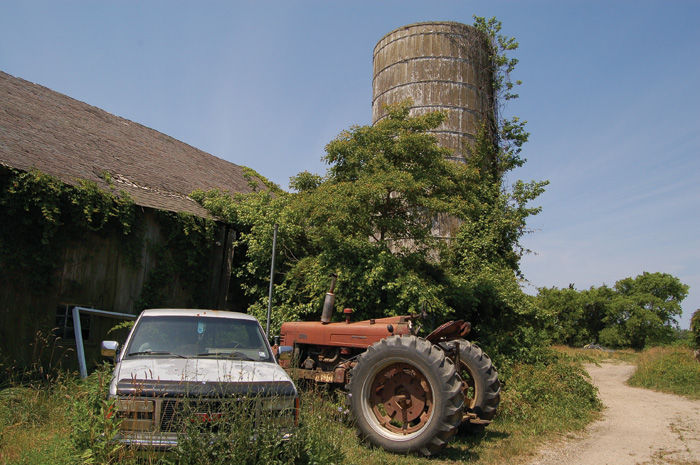