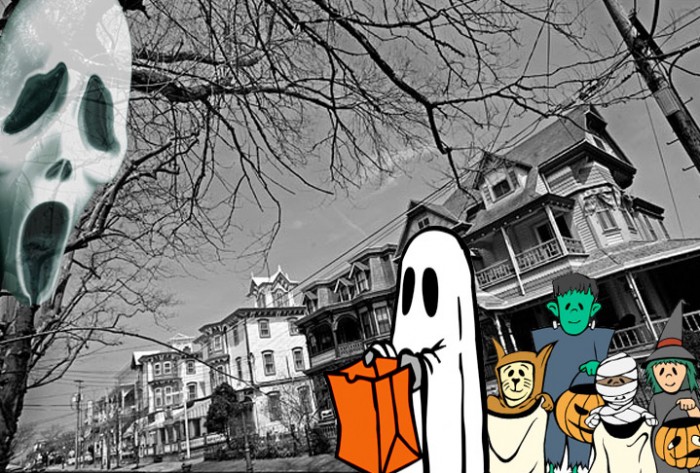 Americans seem to be obsessed with ghosts and hauntings, especially this time of the year. We talk about them. We write about them. We chase them with meters and equipment, probing and prodding, searching all of their safe hiding places until we find them. Then when we finally do find one, we scream. Whoever thought up the idea of Halloween was obviously not a ghost.

October. The air begins to chill, slowly, first at night, and then during the day. The leaves start their colorful dance ushering in the final stage of their existence. Nature begins its preparation for a long winter’s nap. Everything alive seems to go to sleep or migrate south. Only we humans seem to stick around for the colder months. October, with its warm days, cool nights, and colorful displays of foliage, is a favorite month for many―many of the living that is. For the dead, the month signifies an unwanted awareness by the living that the dead may be lurking around us. Those feelings build to a pitch as we approach Halloween. The dead are just not safe in October―and they know it. The living simply don’t understand the dead. When it comes to a haunting, we take it very personally, even when it has nothing to do with us. October just gives ghosts nightmares.

As a Medium, I sense energies. I have had the ability to do this since I was young. In my early years, I had no idea that I had a gift for such things. The ability ran down both sides of my family, but like many families that have the “psychic gene,” mine never mentioned a word about it. Part of this gift allows me to sense the souls of the dead. They come in two basic forms, the first being the souls of loved ones who have crossed over to Heaven and have returned to guide and help the living, and the second, the souls of people who have never left. They have some unfinished business which keeps them tethered somewhere between Heaven and Earth. We call these souls ghosts.

Ghosts are often misunderstood by the living. Television and reality shows lend a hand in helping to distort our perception of these unseen souls. Most ghosts are not out to “haunt.” They have chosen to remain where they are out of devotion to some unfinished task, material attachment, or emotional tie to the living. If we happen to get in their way, we may cause a disturbance in their existence. Some ghosts simply move in another direction to get away, while other, more strong-willed ghosts may push back. The former is much more common than the latter.

Our existence and a ghost’s existence can be much more entwined than we think—and we may never even realize it. The living and the dead move within the same space, but seldom collide. When I work as a Medium, I have to move my consciousness into the ghost realm, the plane where ghosts exist,  in order to read their thoughts. 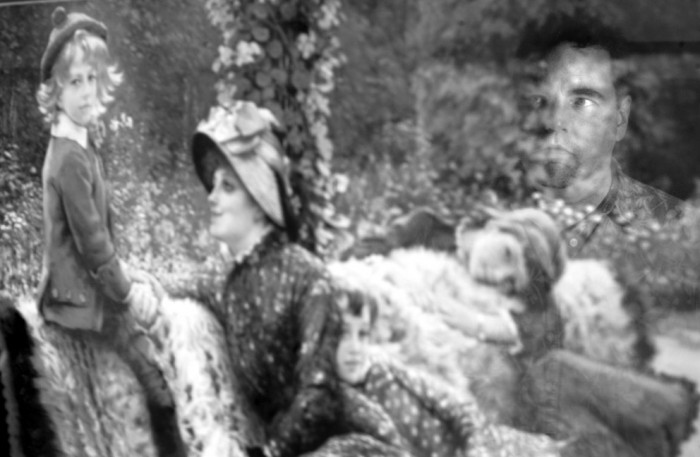 Rarely seen, but often felt, ghosts realize encounters with the living are inevitable. They were once alive themselves. They know their ghostly world is constantly playing bumper cars with the living. It is usually the living who are taken by surprise by ghosts. On some TV shows, paranormal investigators interview “victims” of a haunting to gather first hand accounts of strange encounters at a certain location. If you watch carefully enough, you will realize that most of these encounters are nothing more than chance meetings between the living and the dead.

I am often called in to investigate a haunting. If the story is good enough, I may even add the experience to one of my books. Many of my investigations end with a big―yawn. Just another “garden variety” haunting. Someone hears “phantom footsteps” in their home and feels the ghost is trying stalk him or her. People never think that a ghost may just be walking around their former home. Another common report from the living is feeling a cold spot and taking it as a sign of a paranormal attack. A ghost’s field of energy is thought to interact with our own field of energy and create a feeling of coldness. It is some simple, natural interaction that we do not understand, not a ghost blowing its icy breath down our necks. Unfortunately, most people feel its all about them, and every paranormal encounter is a personal affront. Those folks need to take a reality check, or at least come to a better understanding of why ghosts haunt. 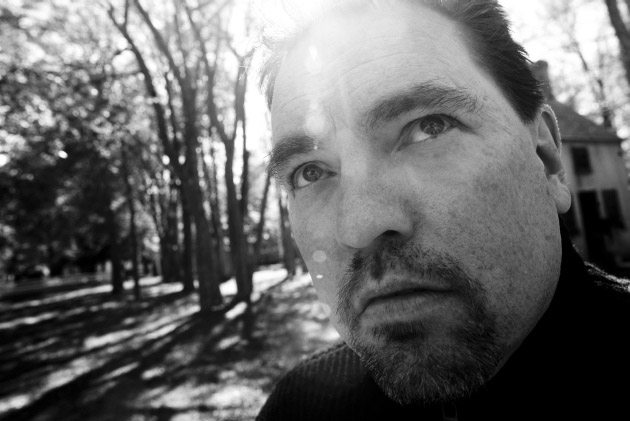 When I work in the field as a Medium and enter a haunted location, I may sense ghosts or I may sense residual energies left over by the living. Residual hauntings are psychic imprints left by living people after a trauma or period of high emotional output. Residual hauntings are not ghosts at all. Intuitive people may sense the energies, but can never interact with them. Should I sense a ghost, I can try to interact and open a line of communication, but the ghost must meet me half way. Some ghosts seize the opportunity to communicate with the living, others walk right out, some even run.

I sometimes get the feeling, in Cape May, that my picture is on a “Watch Out for this Guy” poster in haunted houses all over town. On more than one audio recording, EVPs (electronic voice phenomena) have appeared on my tapes with various voices saying, “He’s the one!” I seem to be equally well known as the Ghost Writer in Cape May by the living and the dead. I have been to many locations in Cape May where I have sensed a ghost, and within minutes, the energy is gone. Some ghosts just don’t want to be bothered. They don’t throw furniture at me or push me out the door. They just leave. 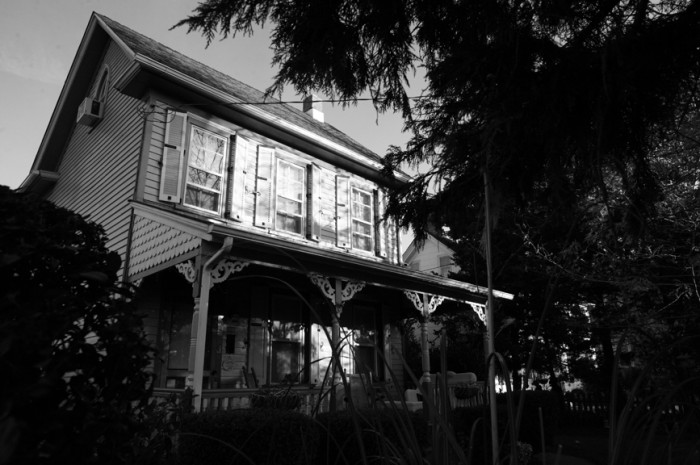 In 400 Years of the Ghosts of Cape May (which has now sold out, and will be replaced by a new coffee table book next spring,) I wrote about an old Victorian home on Broadway in West Cape May that I had investigated. The “Purple House” definitely had a presence when I arrived. We brought in some equipment, and I first sat in the living room. I opened a line of communication by clearing my mind and focusing on the energies in the house. I sensed that this presence was possibly a male, and he was upstairs. We set up equipment in a room on the second, and then the third floor. I asked a few questions, and we heard audible footsteps on the stairs and doors banging. No one else was in the house at the time. Finally, we heard steps running down the stairs and the sound of the front door opening and closing. Had the ghost booked on me? I think he did. Some ghosts do not want his or her stories told. Period.

A paranormal television show cast may have reacted with delight at all the ghostly manifestations of footsteps and doors slamming. I was depressed. The entire reason I was there was to talk to the ghost. Behind every haunting is a ghost. Behind every ghost is a story. I want to hear the stories, not sounds caused by hasty paranormal exits. Sure, I said the classic paranormal reality TV line, “Did you hear that?”, but in reality, I wanted to hear more with my mind than with my ears.

Many people take ghostly manifestation very personally. Don’t get me wrong, there are strong personal encounters between the living and the dead. Most of these visitations come in the form of dreams. When we dream, there is a suspension of disbelief and the lack of realization that we are speaking to a dead person vs. a living one. Ghosts and Spirits of loved ones from Heaven communicate with us in our dreams. It is just easier than trying to do it face-to-face in the light of day. I think it could also be the only way they can communicate. Psychic communication is mind-to-mind, not face-to-face. 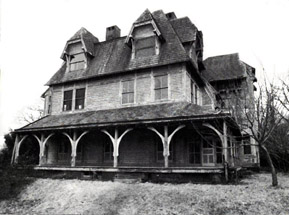 At the Emlen Physick Estate, I do a few “Midnight” events each October. Twenty-five lucky people get to join me at the old mansion on the property and follow me room to room and hear my psychic impressions. The event finishes with a séance in the parlor, where I attempt to communicate with these energies. Some years, the house has been extremely active with noises and ghostly sounds, other years it is quiet as a graveyard. Just because it is the week before Halloween does not mean the ghosts want to come out and play. One could have just as strong an experience in that old house in April or July as in October. Ghosts do not only haunt during Halloween season. They exist, and can be active, all year around. It’s the living that seem to love to go hunting for ghosts exclusively in October.

Ghosts and Halloween will probably be forever linked. However, the truth is most ghostly encounters around Halloween are simply creations of over-active imaginations. We not only expect to see ghosts in October, many crave it. For fans of the paranormal, Halloween without ghosts would be like Thanksgiving without Turkey. Luckily, places like Cape May have plenty of ghosts to spare, and your chances of having an encounter at America’s oldest seaside resort are quite good.

October is also a great time to visit Cape May. A seaside setting in the autumn is just beautiful, and Cape May is quiet and tranquil in October. The crowds are gone and the town is calm. Looking for ghosts? Try fall and winter in Cape May. Halloween may be the appropriate time for ghost events, but if you really want to experience something paranormal, try Cape May in the off season.

Ghosts were once people too. They follow old footsteps and stick to old habits. Personalities never die. When the body finally gives up, it also gives up the ghost. Who we are survives death. Each ghost retains its personality from life. There are happy ghosts, and there are unhappy ghosts. Should you be lucky enough to have a ghostly experience of your own, remember these two things: Ghosts are really not trying to “haunt.” They are clinging to some part of their previous existence. You just happen to be in their way. Second, it’s not always about you (or me). Most hauntings have nothing to do with the people experiencing them. As human beings, we seem to make an art out of taking everything personally, even ghosts. Maybe we just watch too much reality TV.

I wish you all a Happy Halloween, and I hope to see many of you at my fall events. You can read more about what I do and where I will be on my website.