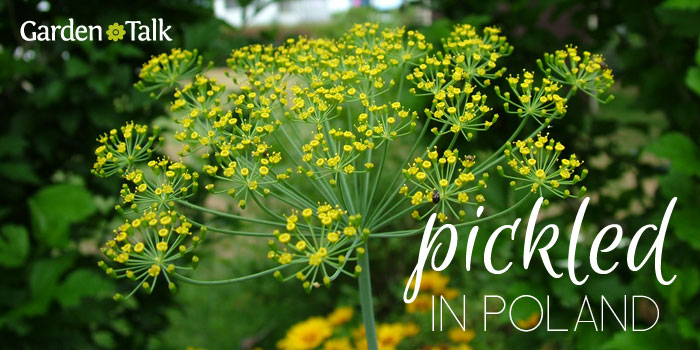 Many have asked how to make old-time dill pickles. I am sharing an old article with hopes it will inspire some to make them. My son Joe recently made a crock that we have all eaten already. New Jersey farms, especially here in the south, have great pickling cucumbers now, and the dill is lush in most gardens. Call around if you do not have them in your garden and make sure you use FRESH ones. 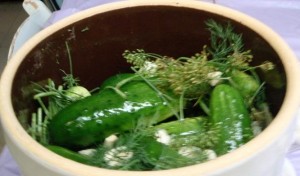 The smell of dill pickles is reminiscent of many things, but mostly of my two visits to Poland in mid-summer. In Poland many refer to mid-July to mid-August as the season of Ogorki. Recently I picked more than a dozen delicious cucumbers from my garden. The plants have responded well to the drip irrigation ted put in and are producing beautiful pickles. When I smell dill or pickles I usually think of the large crocks in my Babci’s (Stella Grochowski) basement. She had a small grocery store / butcher shop in Franklinville, NJ from the late 30s until the early 60s and often made these crocks of pickles for her customers. My Dad would tell me that the local kids loved to go into the cool basement and grab the pickles, often before they were done. In fact my Dad loved them best before the full fermentation had occurred.

As a young wife and mother I often tried to make these big crocks of pickles. I usually put them on the hearth so that any of the brine that might bubble over would not hurt anything, The only drawback was that the entire house smelled like a deli. Pickles made this way need to be refrigerated or put in jars and processed once they are finished. In Poland during the “season of the ogorki,” the smell of pickles and dill is in the air. I love this smell and try to make pickles, even if just a few jars. I usually plant ‘pickles’ rather than cucumbers with seeds from Poland and hope that they mature while the dill is at its peak.

There are probably as many recipes for dill pickles as there are Polish housewives. I don’t remember my Babci using any vinegar in her brine, just water and salt, but today most recipes have at least one cup of vinegar to every 10 cups of water. I have been told that this is to compensate for the lack of acid in the city or softened water.

In looking over many recipes in Polish cookbooks, I notice that they are all different. Some use vinegar. Some don’t. Some add onions, others horseradish, some red pepper, some alum, some a peach pit or grape leaf. I have tried all of these things. I just like lots of dill and garlic!

I’d love to see your recipe. Please email it to me if you’d like. All recipes will be acknowledged and appreciated with free dill or hollyhocks seeds from original ones I brought from a trip to Poland. Happy Pickling!