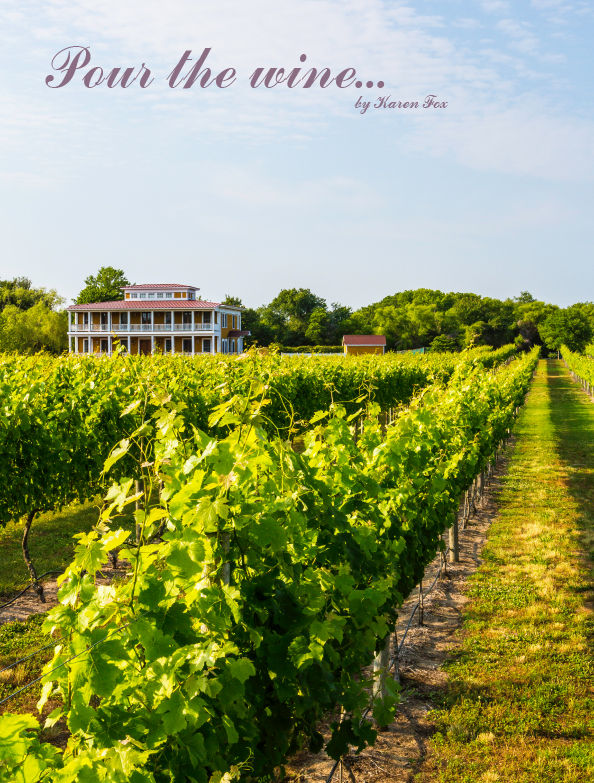 The sea mist and its sheer curtain have lifted. There’s not a cloud in the sky and the sun begins its high ride. A breeze ripples from the bay to the harbor, and you can hear the whisper of the ocean rolling in at the cove.

The water and the weather are what make Willow Creek Winery possible here on the outer coastal plain stretching along the tip of the cape. Far as the eye can see, there are grapevines in perfect rows, reaching up to meet the day.
The scent of lavender drifts across the villa veranda from a sweeping swath of pastel purple spikes. Honey bees buzz over mounds of catmint. Banks of hydrangeas are opening their big mop heads. A cock crows – as if to announce an event.

And here she comes on her golf cart – Barbara Hamilton Bray-Wilde, waving and smiling and flying up the driveway. She is the chatelaine of Willow Creek vineyards, villa, gardens and brand new winery.

This season, for the first time since planting 40 acres of vineyards over seven years ago, Willow Creek Winery is attempting to open to the public. It’s an exciting time at this historic farm on Stevens Street in West Cape May that grew lima beans and soybeans before its reincarnation as a vineyard.

“Hello, hello,” says Barbara, clutching a small orange ball. “It’s my baby Fuyu persimmon, the first one from my new tree. See, it looks like a little squashed tomato. You eat it like an apple. I have a Hachiya persimmon, too, shaped like a heart. It must be tempered by frost. It gets soft and you eat it like pudding.”

She’s a petite figure in this large landscape, but a tough-as-a-dirt-farmer business woman. “I never say, ‘No I can’t do that,’ she says. And, I don’t take no lightly.” In the 14 years she has owned the property and invested millions, she has faced all sorts of political, competitive, neighborhood, natural and technical obstacles, but her patience and persistence eventually overcome most conflicts. Typically, she’s up with the birds, ready to face the next challenge. 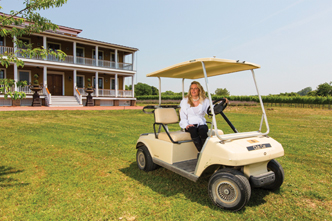 “When you own a farm like this,” she says, “you can’t preserve it or keep it selling strawberries and string beans at a cute roadside stand.”

Traveling her vineyards by golf cart, Barbara lays out in words the gardens that will populate Willow Creek’s plant trail, designed for beauty and education. “This is the Swamp Garden. Isn’t it lovely, all green and cool? A woman from the Farm Bureau said, “Aren’t you going to skim off that ugly sticky green stuff?’

“Well, no that floating icky green stuff is Duck Weed Lemnoideae. When you look closely you can see there are lots of tiny individual green plants. It’s a high protein food source for waterfowl, and in some parts of the world, human food.”

How is it that Barbara is a well-versed plants woman, and a designer (with expertise from Longwood Gardens’ professionals) of a 40-acre vineyard and estate gardens?

“My degree is in biochemistry from Berkeley, but my grandmother, Gwendolyn Detwiler Bray, was an official of the Pennsylvania Horticultural Society [sponsor of the Philadelphia Flower Show]. She had large gardens and was my mentor. I was breeding iris when I was six.

“Oh, the cell phone.” It’s a local inspector asking 20 minutes-worth of questions about the winery’s fire suppression system, the wells, the water supply. “The DEP [Department of Environmental Protection] has been here 23 times,” says Barbara. “They keep picking nits, but they can’t find anything major that’s wrong.” The state legislative quagmire over operating farm vineyards in New Jersey held up opening of wineries like Barbara’s for over four years. Those issues were resolved earlier this year, but local contention continues over how Willow Creek is to be used for social events. As the summer set in, neighborhood opposition to the winery as a site for weddings and other large events grew more heated. Issues are still being debated on the local and state levels. 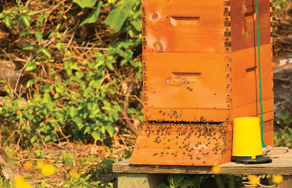 Next stop, a few hundred feet down the trail, the Honey Bee Garden. Two tall handmade, dove-tailed boxes house the busy bee society. The worker bees are gathering nectar for the Willow Creek Raw Honey label. “Here will be planted Monarda (bee balm) and lots of it. Butterflies, the birds and the bees are attracted to the strong mint aroma and bright red and pink flowers.”
It’s the cell phone again. Vineyard manager Kevin Celli has news.
Willow Creek’s eco-friendly tour bus will be arriving. “Visiting a California vineyard, I rode one of these little busses. Home at Willow Creek, I thought, we can provide that service here, our guests riding along, learning the care of vines, winemaking and grape harvesting.”
The state of New Jersey requires that agro-tourism farms include educational features. Barbara’s creation around that rule is about 20 teaching garden stops.

“And here’s one of the folly gardens. Victorians loved follies – small whimsical buildings. This little folly house was built by one of our longtime employees who passed away recently. We will plant hydrangeas in this shady grove in his memory.”

Ahead, the vineyard crew is planting 1,500 more grapevines: Albarino, Pinot Noir, Sangiovese and Seyval Blanc. Barbara wheels the cart to a raked field where precise straight rows have been hand-measured by vineyard foreman Francisco. He and his helpers are power pushing posts in the soil before planting the “new kids.” She greets the men, noting Francisco’s new tractor with air conditioning.

“They are our babies,” she says, wheeling up and down rows of irrigated vines. Mother Nature is cooperating this season.” She pulls up to a new 12,000 square foot building. The hand-carved yellow pine post- and- beam, high- ceiling architecture houses the winery where the grapes will be turned into wine and bottled. (Willow Creek’s first offering was bottled in Pennsylvania.) The huge tasting room and bar are designed for wine tastings and wine-paired, farm-fresh dinners.

Remember the cock that crowed on entrance to Willow Creek? Barbara has designed a secondary label, Wilde Cock Winery, combining her last name and her favorite fowl, colorful game cocks that roam part of the property.
The cell phone rings. “Time to get back to the villa,” says Barbara. “I have a 10 a.m. appointment with my lawyer about the latest round of inspections.” Her lawyer is her fiancé, Marcus Karavan.

“OOOOps. A little detour. Here is Hellebores Hollow. We have thousands of these little faces, first to bloom in spring, even when the snow is on the ground, they thrive here in the shade by this small swampy area with the Ostrich ferns. 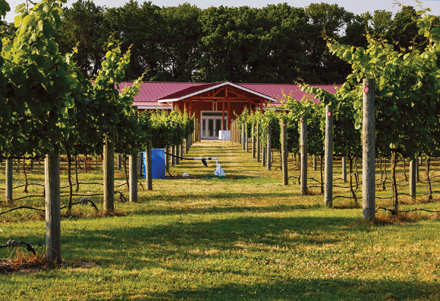 “Here’s the bed of Wormwood, Artemisia absinthiun from which we made our Absinthe.” Wormwood’s aromatic leaves and flowers are the main ingredients. Absinthe was popular among painters and writers in the mid-1800s. Five in the evening was called l’heure verte (the green hour). Artistic imbibers believed the rich green lacquer enhanced their creativity, a muse in a glass.”
Rounding the corner toward the villa, Barbara rolls along her vegetable bed.
In their prime are artichokes. It’s been a robust crop this spring and good for eating. Barbara has decided to let the plants grow tall and bloom. “The large purple flowers are dramatic for arrangements here at the villa and at Southern Mansion.”

The expansive villa is a modern adaptation of the Southern Mansion that Barbara owns and operates on Washington Street in the center of Cape May. “People thought I was crazy building this villa in a dusty farm field in 2006. It looked out of place, but in my picture, it was already sitting in the green of a vineyard tapestry.

“I moved out here to the country in 1998. My daughter and son needed a normal life away from the managed life of an up scale B&B, staff, weddings, caterers.” Now Hamilton is 16 and Richard 14. They go to Lower Township schools and they are local yokels and love it.

“Not intentional,” says Barbara, “but the history of this place is in the shape of my life.” Originally, the land was part of J. Elias Rutherford’s large farm called The Plantation. “Like me, Rutherford was owner of a hotel in town,” says Barbara. “His was the Mount Vernon, promoted as the largest hotel in the world. Rutherford grew produce for the hotel. He treated guests to carriage rides to the farm for picnics and watermelon feasts – knowing that watermelon was filling and more economical than meat to satiate his guests. The winery now will become an amenity of my hotel, but we’ll have a lot more to offer than watermelon!”

The Southern Mansion is one of the most successful B&Bs in the Mid-Atlantic region. When Barbara first saw it, taking a walk on a vacation in 1994, it was abandoned, forsaken, vandalized. Designed by famous architect Samuel Sloan, it was built in 1863 for Philadelphia industrialist George Allen whose family lived at the one and one-half acre seaside estate for the next 83 years. 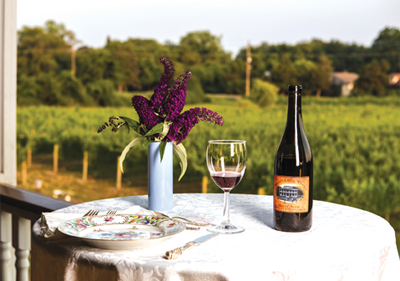 Barbara and her then boyfriend, arranged to buy the property within three days with a vision of what it could be. “If I see a pile of manure, I’ll figure a way to use it and make it lovely,” she says. In less than two years, a marriage, and living with 10 craftsmen, working “20 hours a day in a construction zone with one toilet,” the Southern Mansion threw open its doors in 1996, fresh as new. (Cape May Magazine, Fall, 2008, The Southern Mansion.)

Barbara Hamilton Bray-Wilde has been restoring, building, planting for nearly 20 years on Cape Island. She has altered the way the island looks and the way people enjoy it. She says it’s too soon to kick off her boots, sit on her veranda, sip her wine and enjoy all that she has created.