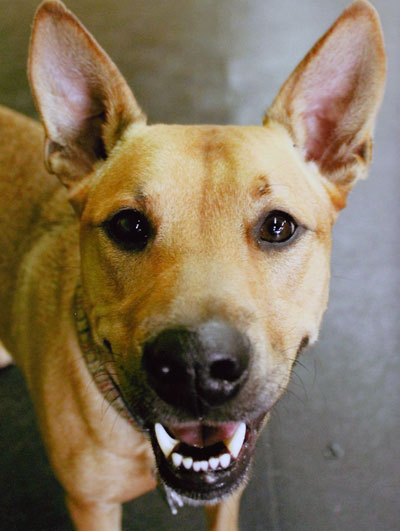 We mere humans have around 50 million scent receptors in our noses, and that seems pretty amazing until you find out that dog’s can have over 200 million scent receptors in their noses, and that’s only part of the story. The number of scent receptors differs by breed but scent in truly the dog’s primary and strongest sense, even though as we’ve stated their hearing and sight are rather incredible. A blind or deaf dog can manage to get around quite well, because they get so very much information from their nose.

In addition to so many scent receptors, a dog’s nose is built for maximizing the intake of information from a scent. A dog’s nostrils “quiver” when they breath, pulling the air and the scent deeper into the nostrils giving more time and space for the scent to be analyzed. The air escapes from the side slits in a dog’s nostrils which creates a stir in the air, thus allowing more of the air and scent to be pulled into the nose. The cold wet nose, made so from mucus glands, also helps a dog gather scent information since the moisture allows scent molecules to gather and be held in the mucus. Also, a dog’s nose has a pocket which allows unusual scents to be trapped in order to give the scent receptors more time to read the information from the scent. Sniffing also helps a dog maximize scent detection. With the short intakes and outputs which signify sniffing a dog exhaling less air then he/she is inhaling and thus allowing more time for the millions of scent receptors to gather information and send it to the brain to get as many details of the story as possible.

And, read the information is actually a good description since all of the scent information collected by the dog tells the dog a story about his/her surroundings, people, other dogs, and just about everything else, including the history! Where people generally rely mostly on sight and hearing, a dog really relies on sense of smell as their first line of information collection. A dog’s sense of smell is so important and well developed that it is suspected that dogs are using their sense of smell even before birth. A dog’s sense of smell tells the dog time (weaker scents are older, stronger scents are newer), about the sex of whomever he/she smells, about that beings emotional state (nervous, angry, at ease, etc.), whether a stranger or new person has visited a dog’s realm, and all about the latest one to pee on the fire hydrant!

Right now, with the scent of spring in the air, your dog’s nose is probably remembering his/her last visit to Cape May and how much fun he/she had. He/she is hoping that you have already made reservations or are looking into making reservations for a return visit for a spring jaunt on the beach, a walk thru town, or a little nap on the porch. Oh, the scents and the stories they have to tell. Hopefully we’ll see you “sniffing” around Cape May soon!