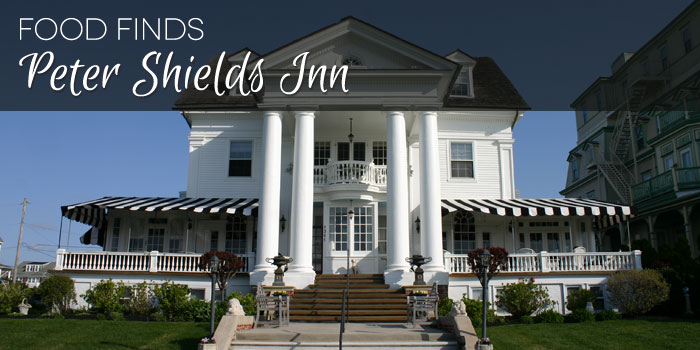 “We were just looking for a beach house,” Armando Pelaez, co-owner of The Peter Shields Inn & Restaurant, recalls. He and his wife, Cathy, and her brother and sister-in-law, ended up buying an historic beachfront property instead. Two years later, their family “beach house” is home to a top-ranked Zagat-rated restaurant and luxury boutique inn. 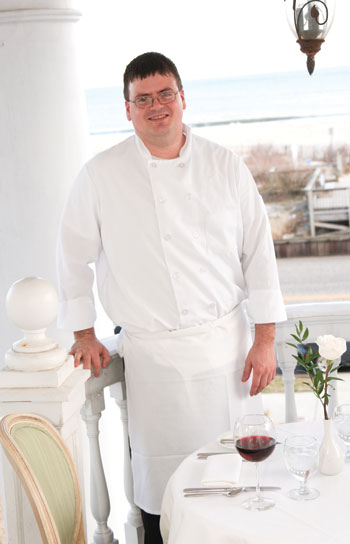 Converted into a bed and breakfast in the 1980s, The Peter Shields Inn & Restaurant has upped its game under new owners and a new Executive Chef. With its panoramic views of the Atlantic, stately Georgian Revival architecture, and fine dining, The Peter Shields has stood out from the sea of restaurants historically. Recent changes have accentuated the positives. However, today there is a new sense of adventure in the kitchen. A more relaxed vibe in the atmosphere. A lighter touch in the décor. The Peter Shields also has made front-porch entertaining more fun. No small feat in a town known for porch hospitality.

I had dinner with friends on the front porch the day it opened in May. We had our choice of menus – the main one offering a variety of selections a la carte and a four-course Chef’s Tasting Menu. Going with the former, we ordered two appetizers to share – the Roasted Beet and Maine Lobster Salad with red and yellow beets, lobster, mache lettuce, carrot shavings, fennel, and lemon oil and the Crispy Calamari with micro cilantro and a lemon chili and vinegar reduction. The salad was a winner. The fried squid could have been crispier.

I had the Pan Roasted Free Range Chicken Breast next. It was served on a bed of spinach, prosciutto and oyster mushrooms in a rosemary shallot jus with potato gnocchi on the side. It was an excellent dish and I plan to return for seconds. One of my friends ordered the 10-ounce Grilled Rib-Eye Steak and Jumbo Crab Cake, served with asparagus risotto and sautéed arugula, which she praised. The other ordered the Seared Scottish Salmon with spring succotash and roasted fingerling potatoes, and raved about how nicely it was seared. We passed on dessert but turned in unison when a waiter carried the Chocolate Lava Cake with raspberry coulis and vanilla ice cream past us.

Carl Messick is the new Executive Chef who is re-invigorating The Peter Shields’ kitchen. Hired by the new owners in February, 2011, he shares his bosses’ goal of making The Peter Shields the best restaurant in South Jersey. Carl worked as Executive Chef at the Ebbitt Room at the Virginia Hotel and the White Heron Grill in Stone Harbor before joining The Peter Shields. Growing up in Cape May Courthouse, he gained an appreciation for local seafood and farm produce. His cooking today in deeply rooted in those lessons. 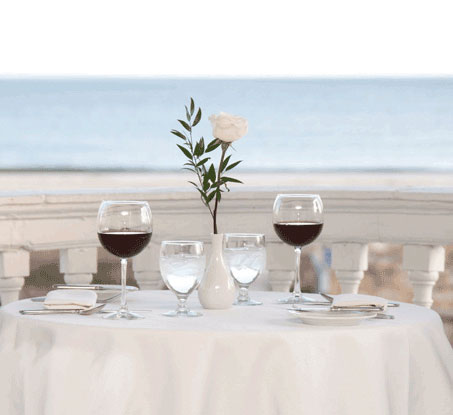 Carl recently ate dinner in the restaurant to experience dining from the guests’ perspective. “It’s helpful being on the other side of the table,” he says. “I usually see something I think we can do better. We’re always trying to perfect things.” He now encourages his staff to eat in the dining room.

The Peter Shields has added two new things to its plate this summer. It began daily lunch service in June that runs through Labor Day. It also launched boxed lunches for guests of the inn and Angel by the Sea next door. One of the owners hints that if boxed lunches take off, the service may be expanded throughout the neighborhood. I’d certainly be neighborly and take a ham and brie sandwich to go to the beach with me.

The Peter Shields Inn & Restaurant is named after the building’s original owner, one of the founders of East Cape May. The eastern end of Cape May was mostly marshland in the early 1900s. Peter Shields, a wealthy businessman from Pittsburgh, and other investors formed the Cape May Real Estate Company in 1903, to dredge Cape May’s harbor and fill in the marshes with the dredged sand. Peter Shields built his home on firm ground in East Cape May in 1907.

Join us for Cape May Restaurant Week, June 2-9! Find all participating restaurants at cmrestaurantweek.com