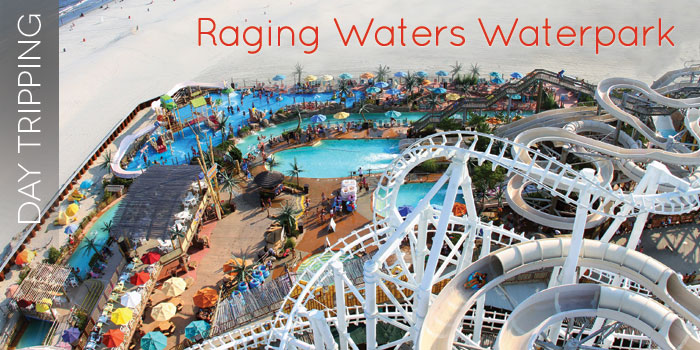 It begins. Starting around May, the whispers build until they hit a fever pitch in late June. “Mom… can we go outside?” “Mom. Mom. Mom. Mom. Can we?”

And then you know when the nagging gets loud enough to drown out the inner humming of Nicky Minaj’s Super Bass, that it’s summer at the seashore. 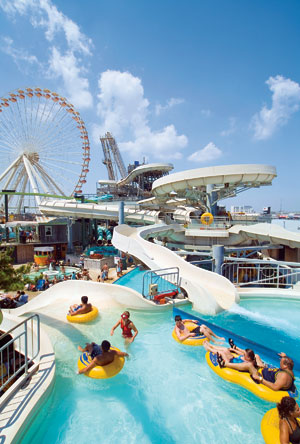 We shore moms are lucky… any day that’s not rainy we can head to the beach, our built-in babysitter. But sometimes when it’s hot, super hot, there’s only one place to go.

There’s something wild about Wildwood. I appreciated its wildness when I was a teenager, but now that I’m a mom of two small boys, I tend to avoid anything with the word “wild” in it with the noted exception of Where the Wild Things Are. That’s just a great book. But the lure of flying down a slide on a tube and thick Curly’s Fries dipped in bright orange cheese took over. So, despite my aversion to crowds, germs, and kids screaming in wild glee, my husband Bill and I packed up our guys and headed north, just about a 10-minute drive into the wildness of Wildwood and into the chlorinated kingdom of Raging Waters.

Raging Waters sits right on the beach, in the back of Mariner’s Landing off the Wildwood boardwalk. Parking was fairly easy, so we pulled into a lot, hopped out, grabbed our beach bag filled with sunscreen, swimmies, flip flops, towels, a change of clothes, and snacks and headed up the concrete plank and into the pier.

Caution: the pier is filled with fun distractions that can easily sweep you in, so put your blinders on and don’t stop to knock over those cans, don’t stop to win that giant panda, and don’t even think that your coin is going to land on that milk bottle. There will be time to play later, so keep on walkin’.

You smell the chlorinated cleanliness of Raging Waters before you see it and to me, a self-proclaimed hyper-hypo mommy, this is music to my nose, er, ears. The staff at Morey’s was pleasant and attentive the entire three hours we spent at the waterpark. From the moment we checked in, got our bracelets, (which turned into badges of coolness that we unwillingly took off at the end of the day), secured life jackets for Sam and Finn, and grabbed a locker, things went fast and smooth. 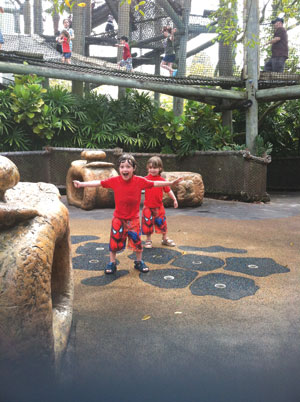 Then things ground to a halt.

In front of the lockers, Sam, Finn, Bill and I just stopped, let our eyes wander and necks crane to see all there was to see. And at Raging Waters, there’s a lot to see up high and down low. It was decided that our first ride would be the lazy river so we could check the park out without actually having to move on our own. Seriously, how can you beat that? It’s a ride where all you have to do is be lazy on a river. And this river is clean, with no fish, or worse, weird bugs. We moved as a unit toward the river and walked carefully into the circular entrance pool. Empty rafts went by one after the other, just waiting for bathing-suited bottoms to plunge inside. Bill was first. He went in, grabbed two rafts and plunged our boys in them. It was at this point that I realized it wasn’t so easy to get into the rafts when you stand a little over five feet tall, the current is pretty strong and there’s no one to launch you tushie-first into the float.

My first attempt to leap up, maneuver my legs and somehow end up in the raft facing the sky and not the pool was, let’s just say, not that good. A cat probably could have done it better. After about four failed flailing attempts, something clicked and I walked with head hung low over to the steps, got up on the second one, did some kind of strange side kick and poompf! Landed upright without tipping. I’m pretty sure I heard some applause and perhaps a bit of snickering… but I didn’t care, I grabbed onto my kids’ raft handles and away we went down the river of laze and through the entire water park, planning our future adventures.

After about three trips round the park with our other lazy lazers, we leapt out. It was time to hit the slides.

Raging Waters has slides for anyone, whether you rate a 2 or a 10 on the brave-o-meter. We started small, by plunging into the activity pool, which was warm and vast enough for the four of us to have our own space, but still revel in the fun had by the other pool goers. Bill attempted to walk across the lily pads, a straight course of ropes and floating buoys, and made it. Salem and Finn looked suspiciously at the gang slide, a superwide and superfun straight slide that empties into the west end. The boys convinced themselves that they were not going to go down that slide. It took about two hours, but eventually Salem took the leap (or slide as it were) of faith and went down. Finn stuck to his guns. Maybe next year, he said. 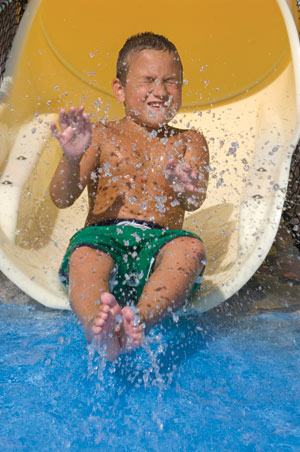 Bill and I took turns playing with the kids in the activity pool and going down the big slides, such as the Rocket Raft tube slides, the Speed Slides, and Sky Pond Journey. On each ride, I felt a mixture of panic (will I tip over the edge?!), elation (I’m soaring down a waterslide!) and relaxation (I’m by myself and for the next three minutes don’t have to get anyone any Cheerios!). Our favorite ride was the Shotgun Falls. It’s a 14-foot drop from the end of the slide into the deep water, which looks way more intense from the sidelines than it actually is. It was so much fun that we both felt giddy afterward and crept back on a second time while we were “off duty.”

Now you’d think that the kids would be b-o-r-e-d by now, and normally you’d be right. There are only so many times they can swim around a pool without wanting a little more action. Well, here’s the thing – some genius planner at Morey’s knew this, and created two amazing water areas for kids that were so entertaining Bill and I wished we could pick them up and magically transport them into our backyard. Our fave was the Shipwreck Shoals, a tall pirate ship with water pistol cannons, little to medium-size slides, shallow splash pools, and loads of climbing and play areas. The best part? There were a ton of lounge chairs all around for parents who might have a split second to sit. Bill and I wanted to sit, but we were having too much fun pretending to be pirates. Arrr!
Behind the pirate ship was another play area for kids called Camp Kid-Tastrophe. There were slides and tons of interactive water play here too. It was fun to let the kids run around with a little freedom and a lot of water. They were soaked by the time we called “five more minutes.”

Our few hours at Raging Waters at Mariner’s Landing was such a blast that we actually had sad faces on as we sat on the picnic bench back on the pier and ate our Curly’s Fries. Luckily, the park is just a few minutes away for an easy return. I can almost smell the chlorine now.

Raging Waters is open every day in July and August, and closes for the season on September 9. For tickets and other information, please visit www.moreyspiers.com.

Editor’s Note: This Day Tripping feature written by Stefanie Godfrey originally appeared in the July 2012 issue of Cape May Magazine.

Tags: This is Cape May, wildwood