Point and shoot. It should be just that easy to take a photo.  But when my mom tries to recreate her favorite shot of my brother, Michael, and I on the boardwalk, it is never a simple task.

The original shot of my brother and I was one of those candid shots that were taken in a quick moment. We did not even realize it was happening. I’m bending over to hold his hand and leading him off to show him something.  It was taken around 2000 when I was six and Michael, one and a half. 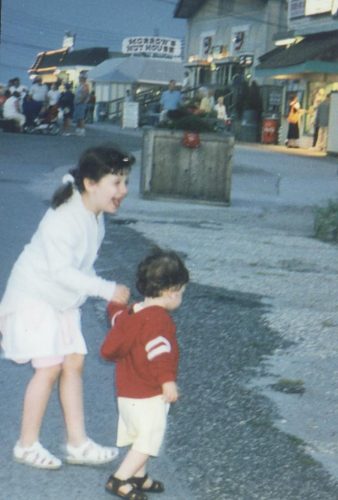 The reason my mom loves this shot the most, is because it has all of our favorite boardwalk spots – the arcade, Morrow’s Nut House, Convention Hall and the Oasis (since gone) – and the newer pictures have Henry’s on the Beach (since gone) in the background.  She took it on our point and shoot, automatic Nikon camera.

Every year since she took that photo, my mom tries to recreate that shot. In fifteen years since the original photo, she has only been successful twice.  Now in the days of iPhones, she can take the shot as many times as she wants, until she is satisfied. Of course, both Michael and I have to be in the mood to cooperate – a difficult task.

2003 was the first year my mom tried to take the photo again.  I was ten and Michael was five, so we were a little more agreeable. We must have been goofing off before she took the picture, because we both have silly expressions on our faces. She took the photo during the day, not totally recreating the original nighttime shot, and there is more of the boardwalk visible than in the original picture. 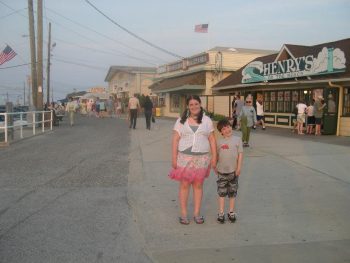 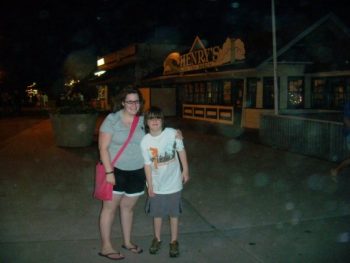 Fast forward to present day, 2015. I am twenty-one and Michael is sixteen, and all attempts to recreate the shot are even more difficult than before. No one wants to cooperate with my mom. So I took Michael to the boardwalk for a funnel cake, and very kindly asked if we could take a selfie of mom’s favorite shot, to update it – and to my surprise, he agreed! Mom did not even need to be involved in this retake (thanks to the popular iPhone selfie) – kind of an ode to how much things have changed in fifteen years. 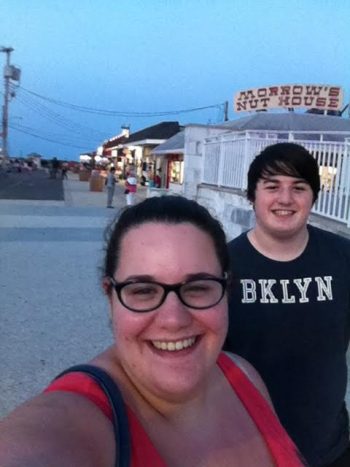 I think the great thing about the original photo, is every time my family looks at it, we smile. It was one of those photographs that you cannot help but love. It not only captured the moment at the time, but kept that memory alive fifteen years later.

It does not take much to get a photo that will continue to be talked about many years later. It was a simple shot that is not perfect and is slightly blurry. In the days of iPhones and digital cameras, we strive to take the perfect shot, over and over again. But there is something charismatic about a photo that only got one chance to come out right.

It might not be the best photo, but it is perfect to my family because the memory lives on a decade and a half later.